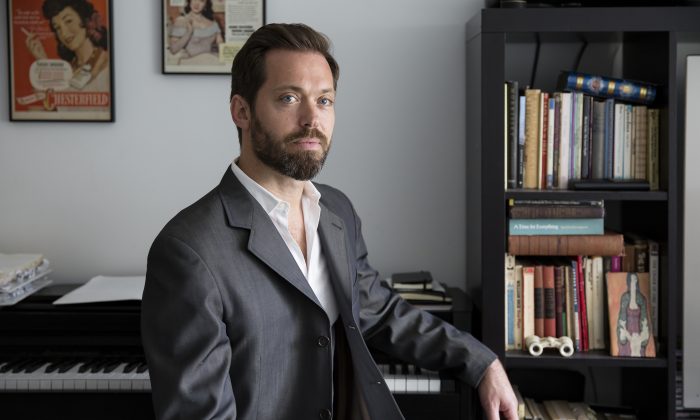 The classics offer artists endless inspiration, says baritone Darren Chase. Each classic piece not only captures its creator’s zeitgeist, but also becomes fertile soil for the works of subsequent artists.

Some contemporary composers recite the mantra “new, new, new, form new things!” But Chase feels that it’s “better to anchor a new creation in something great and respond to it respectfully,” as countless artists have done before.

I’m in music because of the words.
— Darren Chase, baritone

“I’d rather build from those time-tried classics with an eternal quality that have been passed on for a long time,” he said on April 11.

Winner of the 2013 American Prize in Art Song, Chase has sung with opera companies, baroque orchestras, and contemporary classical ensembles, and at prestigious music festivals. With two albums, “Robert Schumann: Liederkreis” and “The Young Debussy,” to his name, Chase is as at home with music as he is with languages.

In fact, irrespective of the belief that music precedes the lyrics, he said, “I’m in music because of the words.” Armed with a working knowledge of German, Italian, Russian, and French, he has been drawn to the art of translating art song lyrics.

His adventure with translating began practically enough. In order to avoid copyright issues, he translated five Charles Baudelaire poems from French to English in 2010 for the notes of his “The Young Debussy” album. He aimed for expressive translations and tried to convey the poems’ multiple meanings to create an overall aesthetic likeness.

This effort allowed him to see that his translations might fulfill a need for his audiences. Many attending his concerts hadn’t been getting the full effect of the music because they didn’t understand the languages being sung and didn’t read the translations he’d provided in the programs. “They were just there to listen to my voice and create a story in their minds based on the vocal line, the vowels, and the piano,” he said.

But, he wondered, if they could instantly understand the lyrics while listening to the music, then wouldn’t their experience deepen considerably?

“My theory [was] that this had to happen in real time, not with the delay of reading translations simultaneously. When you’re reading a translation, there is an added level of processing,” he said. This precludes reaching a deep state where “the mind catches subtle pairings of musical and poetic ideas without exactly knowing why.”

A few years ago, he hit upon the perfect set of art songs to inspire him: Franz Schubert‘s most famous cycle of songs, “Winterreise” (“Winter Journey”). Composed for voice and piano, they are based on 24 poems by Wilhelm Müller.

Chase was not drawn immediately to the works, as he knew they were dark, but the song cycle appealed to him because it could remain in his repertoire for years and his interpretation could deepen over time. He was also attracted to the idea of a cycle in story format, “a saga in itself, … sort of like a one-man opera” rather than, as with many song cycles, a collection around a common theme.

And once he began working on Müller’s poems, their richness offered plenty of inspiration.”I think I also had an inkling that the cycle was really about transcendence and the joy of awakening, even during the worst despair. There is joy underneath every despairing image the poet describes, and it is the joy of acceptance.”

Beyond their inspiring meanings, the poems also offered him artistic challenges: “More than any other poetry I could think of, Müller’s poems lend themselves more readily to poetic translation.”

In the eight months that it took him to translate the rhymes and vocalic harmonization, he delved deeply—more deeply linguistically, historically, musically, and dramatically than he ever had with a song cycle.

As a result, during the last two years of his performing the concerts in English, people have loved hearing in their own language songs that reveal the soul of winter. And he believes that his artistry has matured, which will augment future concerts when he sings the pieces in German next year.

Beyond these benefits, his immersion into the Schubert/Müller songs inspired a completely new project: He’s writing a novella. As some of Müller’s symbolism touched on the effects of industrialization that were then emerging, Chase is updating these symbols with a dystopic look at the technological interface between man, artificial intelligence, and spirituality.

But, of course, Chase is not the only artist building on works of the past. Müller loved the sonnet, a classic form of poetry, and he loved German folk songs. He combined these old forms, using the direct vernacular of folk songs with the “condensed emotion and lofty spiritual rumination of sonnet form,” Chase said.

And Schubert relied on the traditional A-B-A song structure, but added to the emerging Romanticism of the time by strengthening the emotional aspect through the music.

“Both artists were playing on old forms to create something that is very much of their time,” Chase said.

The examples are endless, Chase said. This year, he sang a piece written in 1946, “20th-century but very classical,” he said, by Paul Hindemith called “When Lilacs Last in the Dooryard Bloom’d: A Requiem for those we love.” It’s about the assassination of President Abraham Lincoln and is based on a Walt Whitman poem of the same name.

Whitman was influenced by the works of the European Romantic poets and who, in turn, looked to the Upanishads, ancient Hindu texts. “It all goes back to the old texts. Whitman was riffing on an ancient tune,” Chase said.

With regard to works of huge impact, “there’s the aphorism that we are reinventing the wheel. I believe that,” he said.