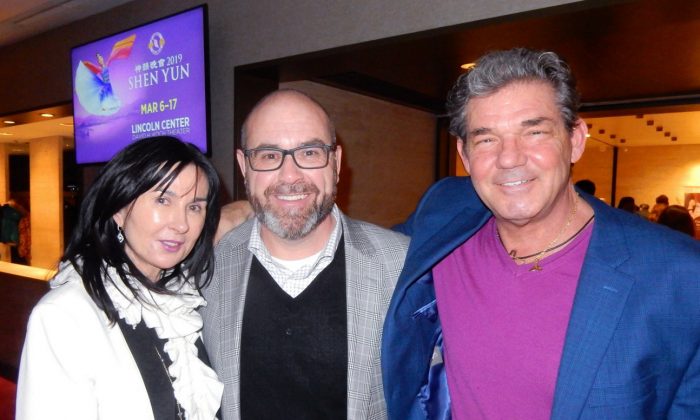 NEW YORK—George Callas was a little lost for words when the curtain lifted and dancers in vibrant costumes glided across the stage. The spectacle in front of him was something he didn’t expect when he walked through the doors of the David H. Koch Theater at Lincoln Center.

“They are very talented people. This is a new thing for me,” he said.

Callas is the chief revenue officer at the Invictus Group, a company that develops tools to provide banks with analytics and data. Prior to this, he was in several management roles for leading financial institutions and financial services firms. He attended the performance on Jan. 19 with friends Ron Justice and Mora Schley.

New York-based Shen Yun is the premier classical Chinese dance and music company that tours the globe with a mission to revive China’s semi-divine culture. Each performance comprises of about 20 vignettes that showcase different aspects of China like its regions, dynasties, and stories.

Many of Shen Yun’s stories portray themes like spiritual devotion, the benevolence of gods, good and evil retribution, and the search for the meaning of life. For thousands of years, the ancient Chinese regarded these values highly, having been influenced by Buddhism, Taoism, and Confucianism.

Along with the dancing, Callas found these stories quite enlightening. He said, “I’m just taking it all in, you know.”

His friend Justice, who is the chief executive officer of The State Bank and Fentura Financial, agreed with Callas. He added that he was just thinking of the beauty of the dancing.

Meanwhile, Schley said she found the performance educational. She said, “I liked learning about the culture and the story [and] how it builds on each segment.”

Callas added, “I recommend people go and see it.”

With reporting by Wei Yong and Janita Kan.