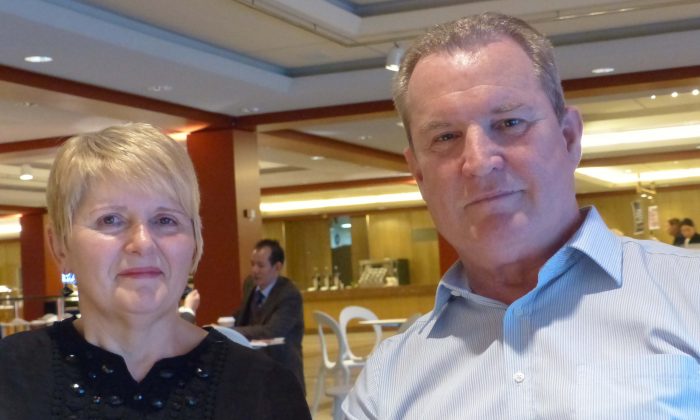 FRANKFURT, Germany—Mr. H.C. Kissner, manager of a large Frankfurt bank, and his wife attended the Sunday matinee of Shen Yun Performing Arts at the Frankfurt Jahrhunderthalle.

“Based in New York, Shen Yun Performing Arts was established by Falun Dafa practitioners in 2006. The company’s mission is to use performing arts to revive the essence of Chinese culture—traditionally considered a divinely inspired civilization. Since the CCP is officially an atheist regime, it is afraid of the freedom of expression this arts company enjoys in the West,” explains Shen Yun’s website.

He continued that it is important that “these Chinese youngsters who immigrated to New York bring back the ancient Chinese traditions. Besides, to bring the Chinese culture to the rest of the world is wonderful. It enriches the view of the world’s people.”

According to the website, “A Shen Yun performance features the world’s foremost classically trained dancers, a unique orchestra blending East and West, and dazzling animated backdrops—together creating one spectacular performance.”

“It was interesting to see on the backdrop scenes from China. This was perfect,” he said.

Something new for him was the solo rendition of the two stringed erhu, also known as the Chinese violin. “The tone of the erhu was so different from what I have heard before and it was very interesting.”

His wife said, “we both enjoyed the show very much and it was fascinating. I can only say that we enjoyed a fantastic afternoon.”

She bought the Shen Yun tickets as a birthday present for her husband after seeing a flyer. She also felt it was an opportunity to learn about Chinese culture.

Both were impressed with the entire show. Mr. Kissner said that they most appreciated the different scenes. “There was always something new. I recall the Manchurian Grace, the flower pot shoes worn by the Manchurian princesses, the Buddhist monks and so much more.”

Before leaving for home, Mr. Kissner said, “It is sad that the culture in China is being suppressed. But, on the other hand, it is wonderful that these performers bring it back and show the world what the true China is like. It is great that tradition continues. It is very positive.”

His wife added, “I’m a little worried that the people in the audience don’t see the real message, but only look at the beauty, hear only the wonderful music and only see the beautiful costumes. I hope that they don’t neglect to look deeper in what these performers are really telling the world.”