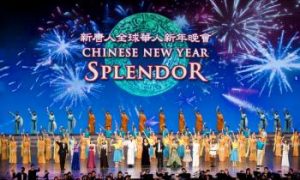 Traditional Chinese Performance Embraced by US
0 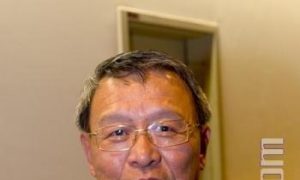 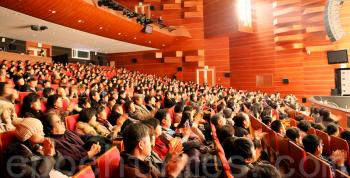 DAEGU, South Korea—Mr. Young-Keun Choi, CEO of the Dae Seo Bank and member of the Future Knowledge Forum attended Shen Yun Performing Arts International Company’s show at Suseong Artpia in Daegu, along with 12 staff members of the bank on Jan. 25. After watching the show, he said that Shen Yun made him have a brand new feeling about traditional arts as he was deeply touched..

Because Shen Yun has caused quite a stir in Korea over the past few days, more and more people from all walks of life made it to the show. Though Jan. 25 was not a holiday, Shen Yun’s sixth show at Daegu was attended by many people, including big groups. According to the organizer’s statistics, over 94 percent of the tickets were sold out that night.

After watching the show, Mr. Choi explained, “When attending a meeting organized by the Future Knowledge Forum at Daegu, I was told by a participant who has been to the Shen Yun show that (seeing it) would be a good opportunity to appreciate high quality classical Chinese culture and arts. I thereby brought 12 of my colleagues in the bank to see the show today.”

“The Shen Yun show illustrates the essence of Chinese arts, and it is a must-see for everyone. This is how I would like to recommend the Shen Yun to others,” said Mr. Choi.

Mr. Choi added with emotion, “One cannot see this art form (the classic Chinese art perfectly presented by the Shen Yun) in Korean arts, and the show was completely new to me. I was deeply moved by the tremendous vigor and vitality as well as the creativity manifested in the program. It’s beyond my words.”

Impressed by the dance Herding on the Grasslands, Mr. Choi said, “The program depicting the story about Mongolian herdsmen was a wonderful piece of work. Mongolia’s majestic spirit was perfectly illustrated. I really admired it very much. As a Korean, I always look up to traditional Chinese culture and arts, with great admiration.”

Taking about the dynamic backdrops, he said, “They were absolutely stunning. No words can express my feelings. My soul was overwhelmed by the show, as the animated screen was so powerful. Performers blended with the backdrops perfectly and the fairies seemed to descend to the stage from heaven. This kind of performance can never be seen in other shows.”

At the end of the interview, he repeated, “Shen Yun show illustrates the essence of Chinese arts, and it is a must-see for everyone. This is how I would like to recommend Shen Yun to others.”