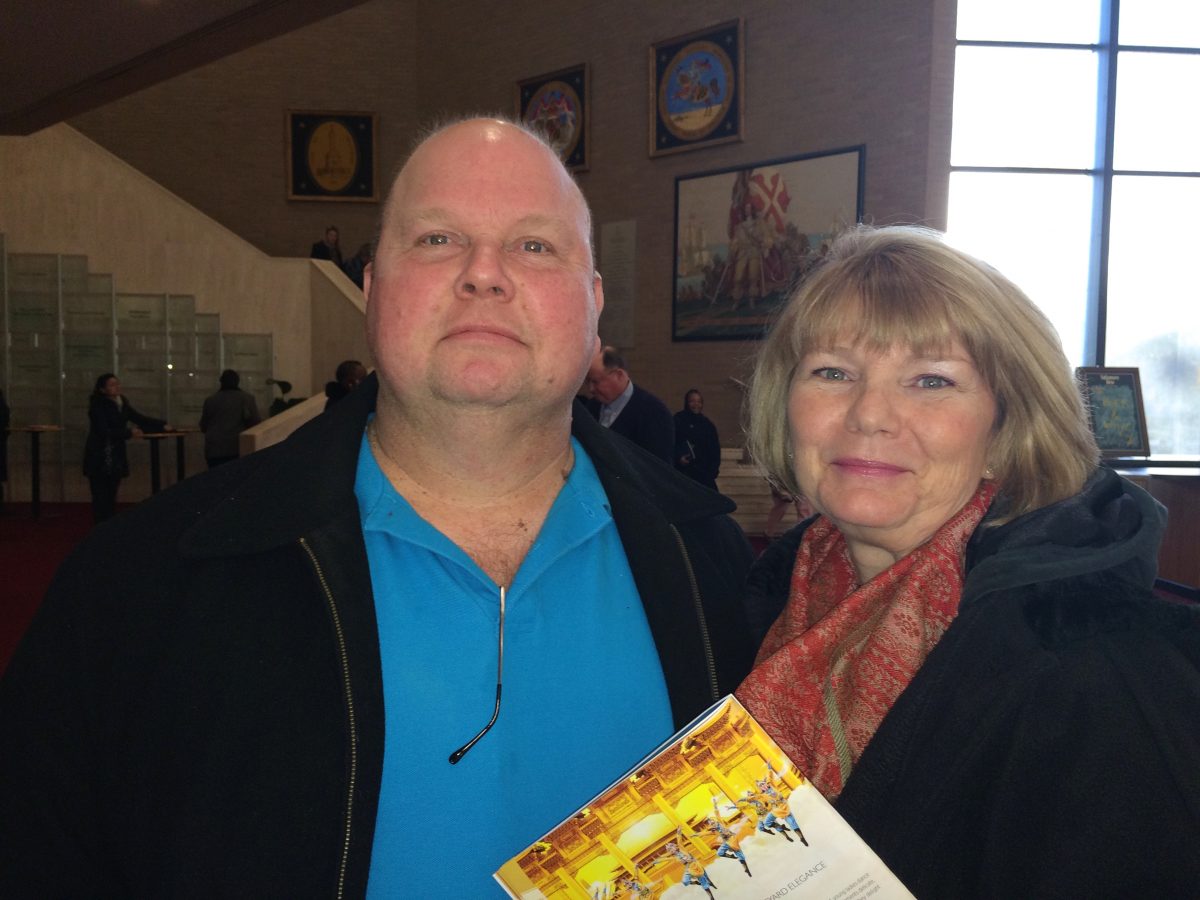 Douglas and Kathy Willey enjoyed Shen Yun when they saw a performance at the Modell Performing Arts Center at the Lyric, on Jan. 31, 2015. (June Fakkert/Epoch Times)
Shen Yun

It continued to erupt after especially impressive flips and synchronized twirls and spins throughout the afternoon performance by Shen Yun Performing Arts at the Modell Performing Arts Center at the Lyric, on Jan. 31.

Shen Yun is a New York-based classical Chinese dance company. Shen Yun performers take as their guiding principles the aesthetic ideals and spiritual and moral beliefs that guided Chinese artists for thousands of years. Their mission is to revive China’s traditional culture through the performing arts.

The name Shen Yun translates to “the feeling of divine beings dancing.” How this large concept can be condensed into two Chinese syllables speaks volumes about the culture. Shen means divine, and yun translates to bearing—but the cultural context of bearing has everything to do with the way dance can express a feeling.

“[Bearing] can best be described as a particular inner spirit,” the Shen Yun Website explains.

“In essence, the spirit leads form, so that form is imbued with spirit,” the website reads.

For centuries, the Chinese believed their culture—including the arts, were given to them by gods and thus the forms of the culture were divinely inspired.

Classical Chinese dance was passed down in the royal courts and street theaters, where it took on the distinct characteristics of different dynasties and developed into one of the most comprehensive dance systems in the world today.

For audience members in Baltimore watching the dance communicated something beyond what they were accustomed to.

Kathy Willey, who works in the ultraviolet systems industry, said she the movements of the dancers helped her ‘get’ the culture.

“You don’t even think how much training and everything they’ve had for me to be able to sit there and get all that through their bodies is amazing, just amazing,” she said.

“I thought it was beautiful, exquisite, and culturally and intellectually, it opened my mind even more to a more heartfelt understanding of China,” she said.

Her husband Douglas Willey, a veterans advocate with the American Legion, who had read about the destruction of traditional Chinese culture during the China’s Cultural Revolution (1966-76), appreciated that Shen Yun is able to portray ancient culture.

“I love how they can express ancient Chinese culture …I’m just glad they had an opportunity to bring out what ancient China was like. Lovely,” he said.

Paul Weykamp, who owns his own law firm, said the performance was very elegant and that the performers had a humility that set them apart from Western performers.

“I think humility in the movements and the dance really reflects the culture … you would never see a performance like that in the West—it really was a cultural experience,” he said

“I think in the West it is really important to be over the top, to be a ‘razzle-dazzle’ kind of thing. … their effort is spent trying to out ‘razzle-dazzle’ the next guy,” he said.

By contrast, Shen Yun was “sweet, elegant, classy, gentle … I liked that aspect of it,” he said.

Phil Templeton, a physician and CEO of a data management company, appreciated the storytelling aspect of the dances and agreed with the traditional Chinese belief that music is curative.

“I know that it heals me for sure, whether it’s just from a mood perspective, [or] I think it’s even good from a physical perspective … it helps a lot of things that I am thinking it could facilitate a lot of healing processes,” he said.