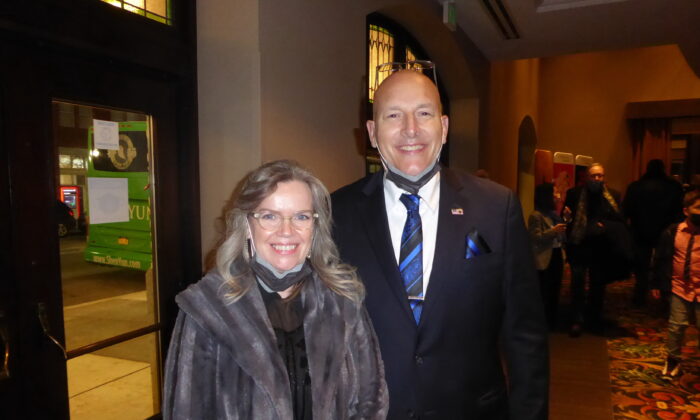 BALTIMORE, Md.—After months of staying indoors and staying socially distanced, Shen Yun Performing Arts audience members in Baltimore were glad to be able to experience the performance in a safe environment.

“I think what it does is it gives people a chance to get out and then be refreshed to see something as great as this right here. And then I think it gives everyone hope again,” said Andrew Miller, a police officer.

Mr. Miller and his wife Robin Miller have been wanting to see New York-based Shen Yun for a long time.

“It was just beautiful. It just gave you a real sense of peace while you watched,” Mrs. Miller said.

It is tranquil and the tranquility of the whole thing is just from start to finish.
— Andrew Miller

“It is tranquil and the tranquility of the whole thing is just from start to finish. It’s not one of those shows like, oh man, it’s done,” Mr. Miller agreed.

The couple applauded the dancers for their skill. They were in awe at the synchronicity of the performers on stage.

“It’s amazing just how everything is all done at the same time. We watched the guys in unison, and when we’re watching the ladies and the guys with their moves, and everything’s going all the same time. It’s really neat,” Mr. Miller said.

They also enjoyed the use of the animated backdrop which is used to give the performers the perceived ability to fly high into the sky or dive deep into the ocean.

“I’m just sitting there watching the choreography, how they did the background, incorporating the background. It was just fantastic,” Mr. Miller said.

Emily Green, a lawyer, was also in the audience this evening.

She felt that with Shen Yun, each moment is more spectacular than the previous.

“Everything was just so beautiful. The next scene kept wowing you more than the last,” Ms. Green said.

Ms. Green expressed her support for the company and their endeavor to have more people appreciate Chinese traditions.

“I thought it was beautiful. I wish that people knew more about the traditional culture and that there was more respect and recognition of it,” she said.

“In modern times, we’re so preoccupied with the mundane tasks of lives and our devices and just, you know, not really living in the moment not really celebrating life, but we should,” she added.

One of her favorite pieces in the performance was the water sleeves dance.

“It was just almost like magic. Like they were floating on air and they were so graceful. And it was very peaceful to watch,” Ms. Green said.

She felt that all of Shen Yun’s performers deserved credit for the effort that goes into such a well-rehearsed performance.

“The strength they showed, their skill, I can’t even imagine everything that they’ve done. I have so much respect for them,” she said.