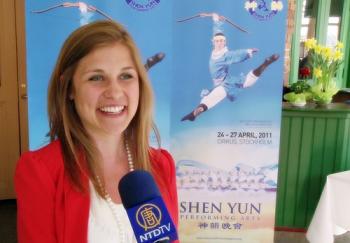 By Epoch Times Staff
Print
STOCKHOLM, Sweden—Felicia Sobocki used to be a professional ballet dancer. Now she runs a jewelry company. She was at the Cirkus Stockholm to see Shen Yun Performing Arts Touring Company's presentation of classical Chinese dance and music.

“I really liked it," she said. "I'm a dancer myself and it was very nice, very different."

Ms. Sobocki especially liked the joy and color of the costumes. She said that the show was different, because it told a story that she appreciated.

“It's about tradition and culture, but also about what happens in China right now, with the laws that don't allow freedom of opinion. I really reacted to that, that you're not allowed to have your own opinion."

Since Ms. Sobocki used to be a dancer, she knows how demanding different dance techniques can be.

“Some of the techniques they perform are really difficult. They are very skilled dancers. All those leaps and acrobatic movements are really astonishing. I'm a little ashamed that I can't do the things they do!”

Shen Yun's dances include a series of very difficult moves—jumps, flips, twists, and spins that have been a part of classical Chinese dance for thousands of years, the company's website states.

Felicia Sobocki came to the show with her parents. Her mother, Ulla Sobocki, recommends the show to anyone. “You have to see it, it's truly amazing,” she said.

“I was very impressed. I'm happy that they talked me into coming! At first I thought that I didn't want to waste such a beautiful, sunny Monday, but I really enjoyed the show. Not a dull minute,” he said.

Mr. Sobocki said he learned about Chinese culture during the show and found the emcees' comments helpful and interesting, as they helped him enjoy each scene more.

“I learned that the Chinese traditions are very old—5,000 years. I also didn't know that the acrobatics they performed had its roots in Chinese dance, that was interesting," he said.