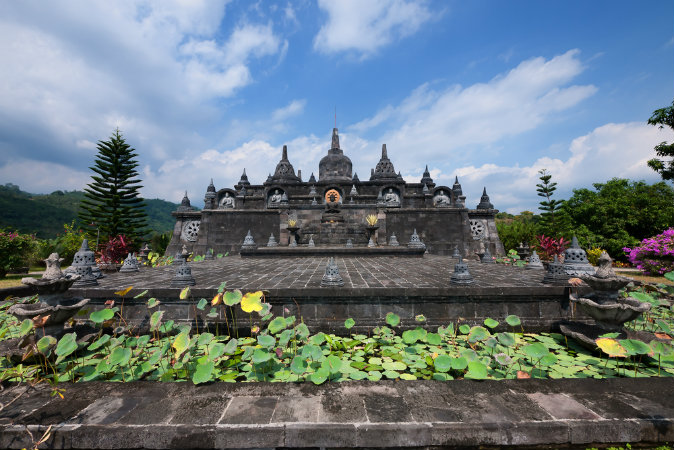 Bali – Exquisite Is the Only Word for It

I am high up in the mountains of north-central Bali, jut outside the village of Munduk. At the moment, I am having dinner at an outdoor restaurant at Puri Lumbug Cottages, where I will spend the next two nights. The view is spectacular – massive mountains with mist clinging to their skirts and clouds kissing their peaks. But this view is only the latest in a day of spectacular sights and experiences so let me begin at the beginning.

I had planned to get up early this morning and lie by the pool for a couple of hours but the day dawned gray again. Instead, I rolled out my Yoga mat and perched myself so I could see the black sand beach and glassy sea just through my hotel room window. Two and a half hours later, having worked out a boat-load of kinks and locked-up muscles, I sighed with satisfaction and headed for breakfast. This is the first time I have done any Yoga since leaving the States. I don’t really know why I didn’t maintain my practice while I was in Vietnam. Perhaps it was the fact that my time there was crammed full of tours or maybe it was the crazy energy of the country that put me off my practice. Whatever it was, it sure feels good to be back to my Yoga.

During breakfast the weather Gods smiled. The clouds parted and blessed sunshine poured down, just in time for the day’s touring. Our first stop was the Brahmavihara Arama Buddhist Monastery. I donned the traditional sarong and sash required for visiting a temple and headed up to the top. I’ve seen lots of temples, pagoda, ruins and monasteries over the years but this one ranks among the most beautiful. It wasn’t covered in gilt as in Thai temples, nor was it inlaid with ceramic designs as in Vietnam. It was actually a fairly simple collection of buildings, but they were set amidst stunning gardens and perched high on a hilltop overlooking the ocean. Every inch of this monastery was a reflection of the loving manner in which it is maintained. I slipped a donation in the box, lit two sticks of incense, and offered up a prayer for world peace and the highest good of mankind.

*Image of Brahmavihara Arama – Buddhist Monastery in Bali via Shutterstock