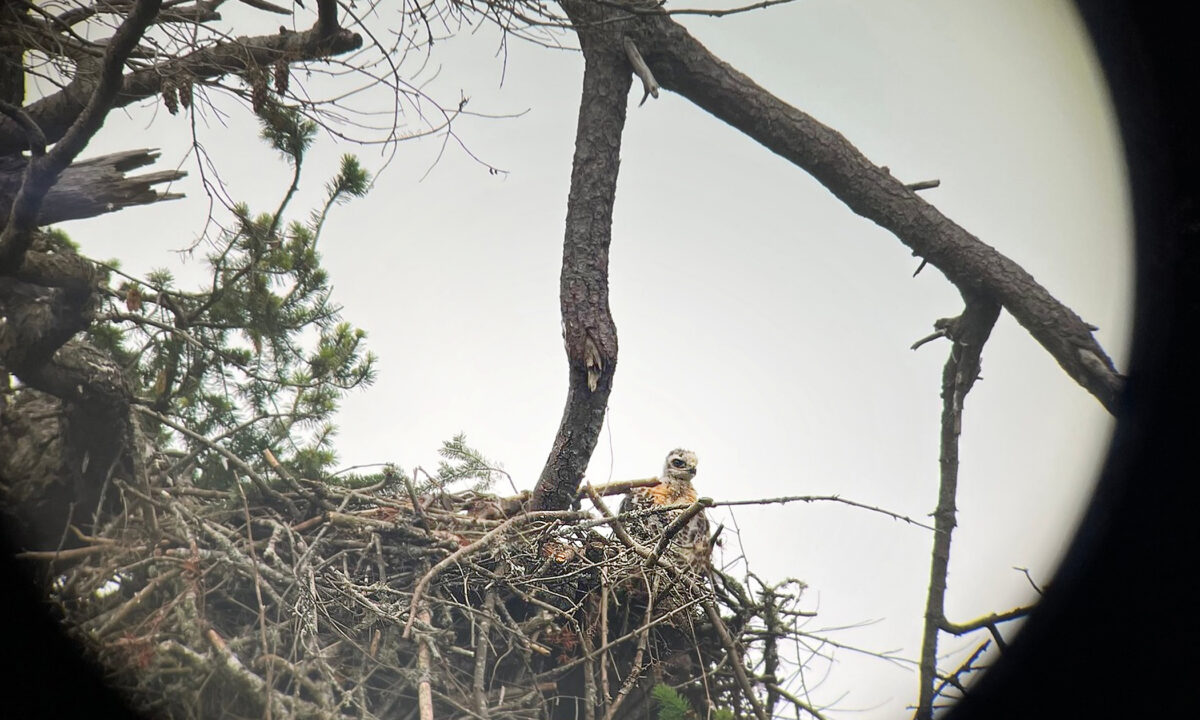 Livestream footage from a bald eagle’s nest-cam captured the extraordinary moment when a family of bald eagles adopted a tiny baby red-tailed hawk on Gabriola Island in B.C.

An adult bald eagle dropped off what looked like a ball of fluff into its nest—presumably live food for its young eaglet to start tearing limb from limb.

But, the family apparently had a change of heart, and decided to raise what was actually a meager, helpless hawklet as one of their own instead.

“This bird likely came from a red-tailed hawk nest that was preyed upon by the adult bald eagles,” Professor David Bird, an ornithologist at McGill University, told CBC.

“And the next thing you know, the little hawk bounces up and starts begging for food right away. That’s what saved its life.”

The eagle’s nest-cam is monitored by Pam McCartney, a volunteer for Growls wildlife organization, who was awestruck by the interspecies adoption.

Initially, the hawklet and eaglet stayed on opposite sides of the nest, and the mother eagle paid little heed to the tiny prey, McCartney said.

But by nightfall, the parent was already feeding and fussing over the tiny red-tailed hawk like one of her own.

This nest-cam is one of several operated by Growls on Gabriola Island, located just off Nanaimo on Vancouver Island.

The specific location of the nest is being kept secret so birdwatchers don’t disturb the interspecies family.

Considered opportunistic hunters, the adult bald eagles likely spotted the baby red-tailed hawk in its nest and picked it off when the chance presented itself.

The hawklet is also extremely lucky it wasn’t crushed by the larger raptor’s powerful, razor-sharp talons. “I’ve had these on my fist. I know what that feels like,” said Bird.

Guessed to be 2–3 weeks old, the hawklet would have looked very similar to a baby bald eagle.

According to McCartney, the eagle family previously lost one of its two young; the hawklet now seems to fill its place.

She has been watching the nest-cam obsessively since the hawklet was deposited in early June.

Observing the hawklet and its eagle sibling interacting from pre-dawn till after dusk, the much smaller hawk is seen “waking up” its bigger counterpart around sunrise. In one instance, the young eagle is seen feeding the feisty hawklet.

“It’s incredible to me, and I just find them to be, like, this happy family,” she added. “They all get along [and] sometimes they give each other little, you know, eagle kisses or whatever—raptor kisses.”

It’s not the first adoption of its kind in B.C. In 2017, a pair of bald eagles with three eaglets were seen raising a red-tailed hawket in Sydney, near Victoria. The baby hawk grew strong and healthy, but flew off prematurely—likely because red-tailed hawks feed on different prey.

The striking footage from Gabriola Island is a first for the professor.

“I don’t think in my lifetime I would have believed I’d see that,” he said. “It’s quite a rare thing to see.”