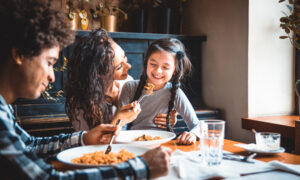 Yes, You Should Bring Your Kids to Restaurants
0 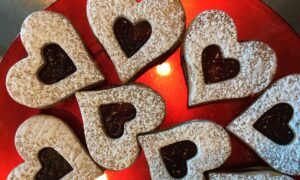 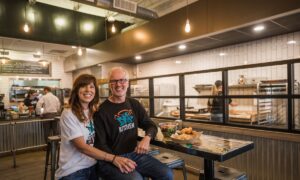 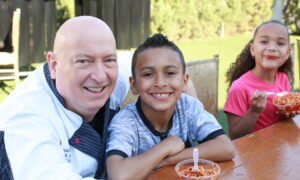 Fighting Child Hunger, One Plate of Pasta at a Time
0 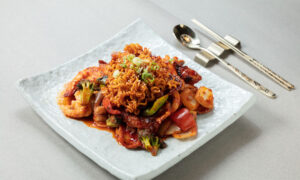 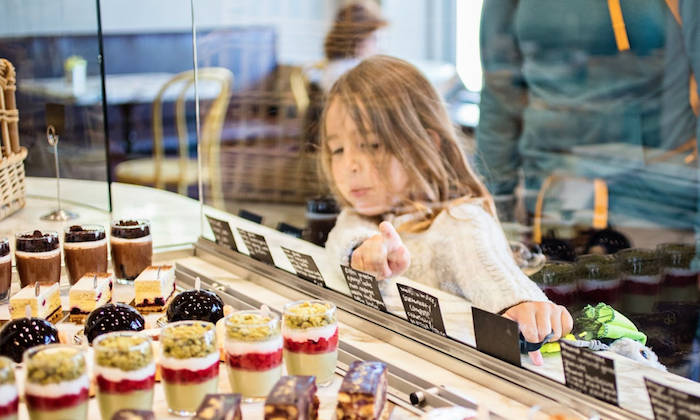 Kids are some of the bakery's best customers. (Courtesy of B. Patisserie)
Restaurants

Baking With a Humble Heart at B. Patisserie

When I ask Belinda Leong about her special granola, her face lights up. “Want me to get some? Do you want to try it?” She quickly disappears and reappears holding a neatly packaged bag of granola.

The granola is delightful: It smells like popcorn and has a kind of heartwarming deliciousness that reminds me of childhood. Leong describes it better: “It’s like a party of textures in your mouth. It’s crunchy, airy, crispy, and it’s not sweet.” Once you start eating, it’s hard to stop, and it tastes wonderful on its own, without milk or yogurt. Over the next few days, I keep popping some into my mouth.

At her bakery in San Francisco, B. Patisserie, Leong conjures up a delightful assortment of pastries that are much like her granola—enchanting combinations of flavors and textures that excite your taste buds without ever feeling too sweet or intense. The bakery caters to crowds seeking lighter desserts, the kind that you can enjoy every day.

Since Leong opened B. Patisserie with Michel Suas, a renowned baker and pastry chef from France, they’ve built it into a neighborhood fixture and one of the most beloved bakeries in San Francisco. Leong and Suas were also recently honored with the 2018 James Beard Award for Outstanding Baker. Each of their meticulously baked pastries represents their humble, sincere heart toward their customers.

Leong fell in love with pastry when she started filling in for the empty pastry chef position at Michelin-starred Restaurant Gary Danko. She had previously been making savory cuisine there, but soon found that dessert-making was “more fun and more whimsical.”

To hone her skills, she enrolled at the San Francisco Baking Institute, where she met Suas, the institute’s founder.

“She failed. She failed,” Suas says, as Leong begins to laugh. “You want to know the truth? She was falling asleep in class.” Suas is always making people laugh with his banter. But he later explains that she had a good excuse: she was working night shifts at Restaurant Gary Danko until 1 a.m. after attending class from 8 a.m. to 4 p.m. every day.

Outside the classroom, Leong excelled in lab at the San Francisco Baking Institute and impressed Suas. And she was always eager for more opportunities to learn hands-on. After eight years at Gary Danko, she flew to Europe to stage for giants in the culinary and pastry worlds, like Pierre Hermé in France, Bubó in Spain, Noma in Denmark, and In de Wulf in Belgium.

Suas may be a teacher now, but he too was never particularly suited for learning in a classroom. Back when he was a teenager in France, he was deemed too rowdy, and at 14, he was told to go learn a trade. So he chose cooking, later switched to pastry, and by 21, he was the head pastry chef of Restaurant Charles Barrier, one of the few French restaurants honored with three Michelin stars. It was nerve-wracking—“You never gain weight because you’re scared,” he says—but also wonderfully fun.

After two or three years, Suas was ready for a new adventure, so he flew to the United States with a backpack and three hundred dollars to begin his career anew. Now he’s the go-to guy for artisan bread and pastry, offering advice to many establishments like La Brea Bakery in Los Angeles and Balthazar in New York City.

When Leong returned to San Francisco, she sought Suas’s advice on starting her own bakery. Together, they built B. Patisserie, the culmination of their shared vision. Their bakery unites the exquisite high-end pastries of France with the casual, relaxed vibe of San Francisco. It’s comfortable and welcoming—no chef coats, no chef hats—and the open kitchen allows people to see all the dessert-making magic. It’s elegant without being pretentious.

Instead of choosing the busiest part of town, Leong and Suas went for a quieter part of San Francisco. It’s not the kind of place you stumble upon while walking through the city. It’s the kind of place you hear about from friends and go searching for. “The store is a bit away from the foot traffic, so whoever decides to come, they decided to,” Suas says. “You see people coming with big smiles because it’s a destination.”

Both Leong and Suas don’t eat too many sweets, contrary to expectation. So why do they spend all day making them? “When you don’t like sweets, you try to find something better. You’re never pleased,” Suas says.

What makes the ideal dessert? “The flavors pop, and they’re alive in my mouth, and there [are] a lot of textures that surprise my palate and a balance of sweetness to savory to saltiness. I’d say that’s a good dessert—when it’s completely balanced,” Leong says.

Suas elaborates with a description of the perfect croissant: “It has to be that when you bite it, you get a little crust on it; you can hear a little crust. Then you go through it and start to feel a little more of a velvety texture, and then all of a sudden you have an explosion of flavor with the butter and fermentation.”

Every day, customers pour into B. Patisserie to get their “shot of sugar or happiness,” as Suas likes to phrase it.

“You can become a little cocky and pretentious because of the crowd,” he says. He makes sure to remind their team of bakers to value their customers, to stay humble and sincere, and to deliver the best pastry to everyone who walks through the door. “Every customer is one customer who decided to come, and we need to take care of them as individuals,” Suas says.

With the open kitchen, the bakers at B. Patisserie can savor people’s eager, smiling faces as they point at their favorite pastries or take a bite into Leong’s famous kouign-amanns. It harkens back to the days when bakeries were places people went to every day. “Our pastries are not too heavy. They’re quite light, and not very sweet, so people can consume [them] every day.” Leong says.

Patisserie has become a special place, a place for friends and families to create memories and share happiness. “You become so used to the kids in the strollers, talking, and then all of a sudden, kids start to recognize you. The kids are the ones that always want to come, so you see almost a generation growing with you,” Suas says.

One lady in the neighborhood would always crave the fluffy, tender scones at B. Patisserie when she was pregnant, so much so that her baby became affectionately known as the “scone baby.”