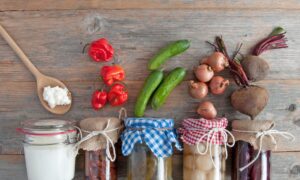 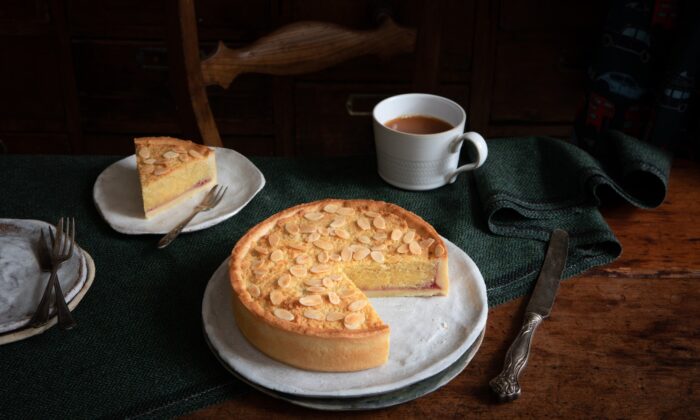 Ysewijn's recipe for "old-style" Bakewell tart stays true to the dessert's origins, with a shortcrust base, raspberry jam, and a dense filling of breadcrumbs and almond meal—and no icing on top. (Regula Ysewijn)
Recipes

In Bakewell you’ll find a bakery on every street corner, each claiming they bake the one and only original Bakewell pudding that made the little Peak District town famous.

Who actually invented the Bakewell pudding? According to the most popular story, the Bakewell pudding originated around 1850 when the maid of the local Rutland Arms pub made a mistake when reading a recipe from her mistress, Anne Grieves, thus creating a new bake that they then baptized as Bakewell pudding. However, recipes for this pudding appear two decades earlier in two manuscript recipe books, and in print in “The Magazine of Domestic Cookery” published in 1836. In “Traditional Fare of England and Wales” from 1948, a recipe says that: “A Mr Stephen Blair gave £5 for this recipe at the hotel at Bakewell about 1835.”

But while the Bakewell pudding was most likely an 18th-century sweetmeat pudding renamed to create a local delicacy to attract the increasing number of Victorian tourists when the railway came to the area, today we find yet another kind of Bakewell in Bakewell, and it was not invented by a kitchen maid.

Filming a program with the BBC recently about how the iced “Cherry Bakewell”—the supermarket version of the Bakewell tart—was born, I found out that although five years ago you couldn’t find an iced Bakewell tart in Bakewell (at one bakery there was even a sign saying that you shouldn’t ask about iced Bakewells because “Bakewell tarts are not iced”), today you can choose between a plain Bakewell and an iced Bakewell. The owner of Bloomers of Bakewell bakery, where the aforementioned sign used to be, told me, rather sadly, that tourists now demand iced Bakewells because they know them from the supermarket shelves and see them as the original Bakewell. You can also make a Bakewell as a traybake (sheet cake). This is known as a “Bakewell slice” when divided up into portions.

The iced “Cherry Bakewell” is a completely different product. Its scallop-rimmed pastry casing and smooth white icing with a lone cherry in the middle did become iconic, even though it had nothing to do with the original. It was developed in the 1970s by Mr. Kipling, a major manufacturer of cakes, and today the tart is manufactured on a massive scale throughout Britain. And so the history of this bake changes again. It is only a matter of time before the Bakewell tart—as we know it now—is replaced by the iced version created to meet mass production, with a cherry on top.

The recipe in this book is based on the Bakewell pudding from Mrs. Leyell’s book, “Pudding,” published in 1927. Although in the book it is called “pudding” rather than “tart,” it is what we know today as a Bakewell tart. The only difference with the commercial Bakewell tart is that this recipe uses breadcrumbs and almond meal, which makes for a superior, more dense filling, and not frangipane. So by baking this version, you’re keeping the old-style Bakewell tart alive.

Due to the dense nature of this tart, it will keep for many days in an airtight container. I think it even improves on the second day.

For the Shortcrust Pastry

Make the shortcrust pastry by combining the flour, sugar, salt, and butter in a food processor fitted with the blade attachment. Pulse for 8 seconds until the mixture resembles breadcrumbs. Add the egg and water and pulse again until the dough forms a ball in the bowl. Remove from the bowl and knead briefly. Wrap the pastry in plastic wrap and let it rest in the refrigerator for 30 minutes.

Roll out the pastry on a floured work surface to a thickness of 1/4 inch. Fold in the sides so that the pastry will fit into the base of the tin, then gently lift it into the tin, letting it sink down into the base. Use a small piece of excess dough to firmly press the edges of the pastry into the tin. Trim the excess pastry with a knife and then pierce the base with a fork. Put the pastry in the fridge to rest for at least 20 minutes or overnight (we don’t blind bake this pastry as we want it to blend a little with the filling).

Melt the butter in a saucepan but don’t let it bubble. Remove the pan from the heat, add the sugar, almond meal, apricot kernel paste, and breadcrumbs and stir well. Add the eggs and nutmeg and mix well. Let the filling rest for at least 1 hour. Towards the end of the resting time, preheat the oven to 400 degrees F.

Spread the jam over the pastry base and spoon the filling on top. Sprinkle with the flaked almonds and bake for 30 to 35 minutes until golden brown.

Note: In the past, bitter almonds were used instead of almond flavoring. These almonds contain a toxin that can be harmful if you eat too many of them. Apricot kernels contain the same toxin but to a much lesser extent, making them a good alternative. Bashed apricot kernels to which rosewater is added give the same marzipan-like odor and taste as bitter almonds.

Adhere strictly to the quantities in this book and do not eat the kernels without incorporating them into the bake. The kernels may not be eaten in any case like regular nuts. Therefore keep them out of the reach of small children and housemates who are looking for something to nibble.

All recipes reprinted from “The British Baking Book: The History of British Baking, Savory and Sweet” by Regula Ysewijn, with permission from Weldon Owen Publishers.