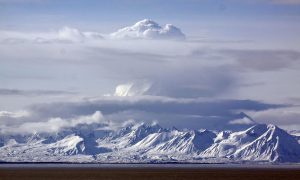 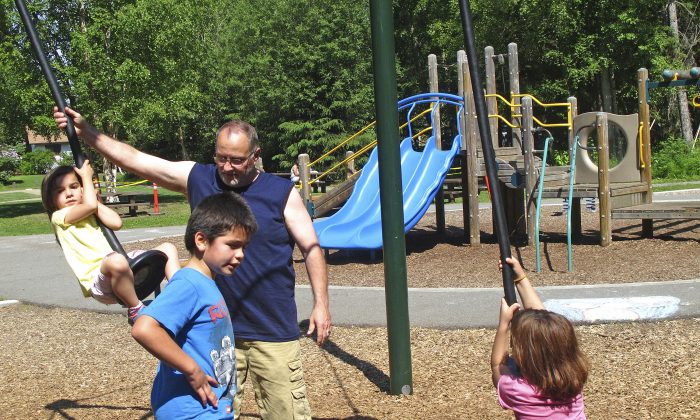 Jeff Martz pushes his four-year-old granddaughter, Aria Flanigan (L) on a swing at a park in Anchorage, Alaska, on Tuesday, June 16, 2015, as other local children play in unusually warm temperatures.
Life & Tradition

ANCHORAGE, Alaska—Anyone visiting Alaska this week would be wise to pack plenty of shorts and T-shirts.

The tinderbox setting got an early start during a warm winter with comparably little snow. Here’s a brief primer on this summer’s baked Alaska:

How Hot Is It?

Summers can get warm even in Alaska, but this week’s temperatures have set records.

Anchorage, for example, had a record high of 83 degrees Tuesday, topping the old record of 82 set in 1969. The normal high for Alaska’s largest city this time of year is in the low 60s, National Weather Service meteorologist Dave Snider said.

And the heat is widespread. The Alaska panhandle town of Sitka, some 600 miles southeast of Anchorage, on Tuesday recorded a high of 77, breaking the 65-year-old record of 71.

A strong, stable region of air is sitting over Alaska, Snider said.

“We’re out of reach of any storm-making pattern right now, allowing Alaska to kind of sit on slow bake,” he said.

What Else Is Different?

A relative lack of snowfall over much of Alaska has also set this year apart in terms of dryness.

For example, Anchorage received 25.1 inches of snow, compared with the normal 74.5 inches. Unless it gets another 5.3 inches of snow between now and June 30, the city officially will experience its lowest snowfall on record.

The lack of snow has meant less moisture to melt into the ground during the spring thaw, resulting in abnormally dry conditions at the start of fire season.

On top of that, relative humidity plummets as temperatures heat up, escalating the risk of forests igniting like torches from lightning or campfires.

“That really is a big player right now,” Snider said.

In addition, half the state was under a red-flag warning through early Wednesday. That signifies what the weather service considers critical fire conditions, which can include a combination of wind, low humidity, and lightning from thunderstorms carrying little moisture.

Is There Other Fallout?

The rising temperatures have led to an increase in reports of pets left in hot cars, with 24 such calls made in Anchorage between Saturday and Monday. Last year, there was one complaint for the same period, said Laura Atwood, a city animal control spokeswoman.

Beating the heat can be tough in Alaska since most buildings lack air conditioning and much of the coast is inaccessible. Anchorage, for one, is surrounded by mud flats along its shoreline.

But Anchorage old-timer Jeff Martz wasn’t complaining Tuesday as he enjoyed the sunshine at a local park with his granddaughter, Aria Flanigan. As far as Martz was concerned, it was a nice change from the past several summers, which stood out to him as having a good share of rain.

“It’s warmer than usual, of course, but I think it’s great,” he said.