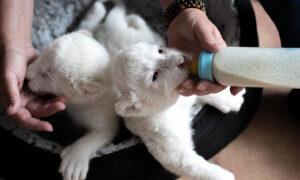 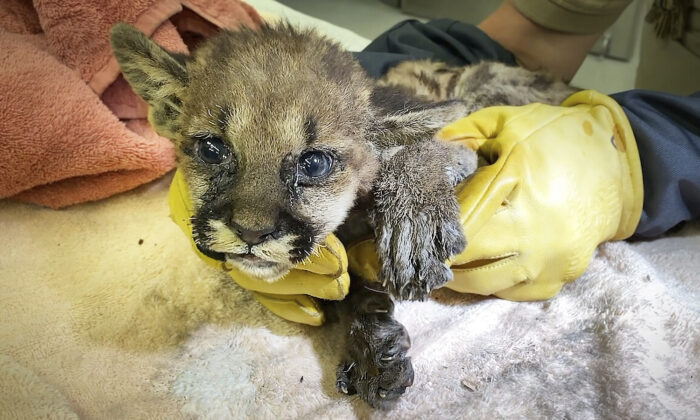 An orphaned mountain lion cub has been rescued and is recovering from injuries after being caught in the Zogg Wildfire in Northern California.

Found in Redding by a firefighter, the 3-to-4-week-old cub was handed over to the California Department of Fish and Wildlife (DFW) shortly after being rescued. The cub’s paws were badly burned and its whiskers had been seared off.

The overwhelmed DFW transferred the cub to the Oakland Zoo, where it is being treated by veterinarians.

Upon arrival, the cub was “acting feisty,” giving veterinarians hope that he would recover. He weighed in at roughly 4 pounds (approx. 2 kg), and despite being caught in the wildfire and exposed to smoke, he did not suffer lung or bone damage.

X-rays did show significant damage to the soft tissue of his paws, but it seems the feisty feline will fight his way back to health.

“We’re cautiously optimistic that this cub will now survive and thrive,” said Dr. Alex Herman, director of the Oakland Zoo Veterinarian Hospital, ABC7 reported. “Our dedicated team at Oakland Zoo is fully committed to do everything we can for him and for his beautiful species.”

The little mountain lion is still young enough to need milk, and he’s being fed with a syringe. He’s on antibiotics, pain medicine, and fluids.

Because he was orphaned at such a young age, he will likely be unable to be released back into the wild. It’s possible he’ll be placed into a zoo that can nurture him and provide a new “forever home.”

In a statement on Thursday, senior wildlife veterinarian Dr. Deana Clifford said, “We are so grateful for the Oakland Zoo’s expertise, world-class facilities and willingness to step up on extremely short notice to help wildlife in need.”