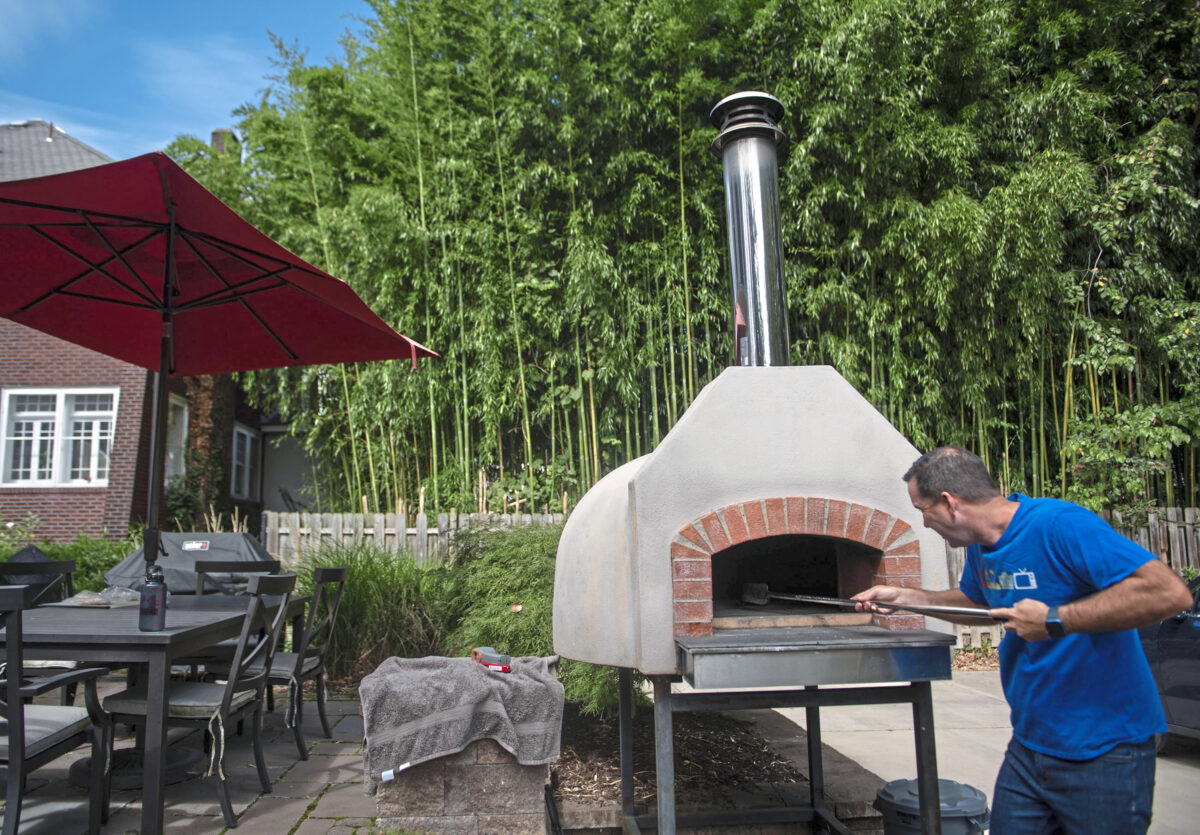 Chris Hayes moves around embers in his pizza oven in his Ben Avon backyard, in Pennsylvania, on Saturday, Sept. 24, 2022. (Emily Matthews/Pittsburgh Post-Gazette/TNS)
Food

By Gretchen McKay
From Pittsburgh Post-Gazette

Like a lot of pizza enthusiasts, Chris and Caran Hayes have always loved authentic wood-fired pies. But they never thought much about recreating them at home until, in 2017, they took a hands-on cooking class while on vacation with friends in Napa, California.

It was so much fun that, when they were planning a remodel of their kitchen and patio in Ben Avon, Pennsylvania, a little while later, they included an Italian-made Mugnaini pizza oven in the design.

Actually, it was his idea to have the $10,000, pre-assembled import freighted all the way from California to his backyard. His wife had to be talked into it.

“I thought, ‘What an extravagance! Are you kidding me? We’re not of that caliber,'” she says with a laugh. “But he was persistent.”

While their budget was a little higher than many, the couple were actually ahead of an increasingly hot trend in home cooking. Pizza ovens, especially portable ones such as the popular Ooni, Solo Stove Pi, and Gozney Roccbox, continue to grow in popularity as home cooks look to stretch their culinary skills while differentiating their outdoor cooking spaces.

Last year, the outdoor pizza market was valued at $310 million. Thanks to a renewed interest in home cooking spurred by the pandemic, it’s expected to reach $402 million by 2027, according to industry reports. Ooni, which is now available in 90 countries, reported a 264 percent year-over-year increase in revenue for 2021.

Made of sturdy steel, with a stucco finish and decorative brick eyebrow arch, the 3,500-pound oven in Ben Avon is certainly a pizza powerhouse worth swooning over. While it took a few tries to perfect his technique, Hayes can now make as many as four 12-inch pies at a time on its 43-inch cooking surface — something he does every other weekend in summer and into December—using a mix of oak and cherry wood. It takes 2 to 2 1/2 minutes, depending on how hot the floor is; he aims for 650 degrees, though the oven reaches more than 1,000 degrees.

The couple also has roasted a turkey and holiday sides in the oven, and desserts such as apple crisp, Tuscan apple cake, and chocolate chip cookies for ice cream sandwiches, once it cools after pizza-making to 400 degrees.

Hayes is quick to point out that his wife is the true master of operations. She stretches the dough they purchase from Aviva Brick Oven in Warrendale and concocts the toppings (Buffalo chicken and shiitake mushroom topped with fresh arugula are favorites). He gets the praise because he’s the one everyone sees putting the pies in the oven, “even though I don’t do all the work.”

Price is obviously a factor when choosing a pizza oven, and the budget-minded beginner will be happy to learn you don’t have to go into debt to test the waters. Vevor, for instance, offers a stainless 12-inch wood-fired oven with foldable legs on Amazon for under $200—on the Vevor site, you’ll find most of its pizza ovens currently on deep discount—and a Big Horn pellet oven, which preheats in about 18 minutes, is similarly priced. Solo Stove’s dual-fuel Pi Pizza Oven is more of a splurge, costing $894.99 (currently on sale for $574.99).

You also don’t have to go too far or spend hours on the web to find one.

Jane Wright of McCandless got her Ooni Koda 16 at her workplace—Williams Sonoma—as a Mother’s Day gift. She was reluctant initially because the oven would be “just one more thing and I’m frugal.” After cooking in it a few times, however, she decided she’d gotten her money’s worth. Especially since she got an employee discount.

She and her husband, Brian, make pizza at least once a week on their patio overlooking a wooded backyard, and it’s super fun creating unique pizzas inspired by those the couple see eating out, she says. One favorite combines roasted shiitake mushrooms with shredded fontina cheese and dollops of ricotta; another marries roasted garlic with cauliflower and grated Parmigiano Reggiano. They also use the oven to make steak and pita.

If you’re seriously invested in pizza making, however, or plan on extending your hand at more than pies, you might want to dig a little deeper for a double-insulated oven built of heavy-gauge stainless steel. An integrated temperature gauge is another wanna-have upgrade.

“If you spend money upfront, they will last quite a long time,” says Nick Hillebrand of Don’s Appliances, which carries Gozney’s Roccbox and Dome models along with several high-end models from luxury Italian retailer Alfa Outdoor and premium grill manufacturer Lynx.

Size is equally important, as in: What will you use it for?

The problem with a small oven is that you can only do small things, says Hillebrand. Pizzaiolos who want to make medium- or large-sized pizzas will probably want an oven that can accommodate pies up to 16 inches. A larger oven will also allow for more varied cooking—say, an entire chicken, loaves of bread, or a cast-iron skillet for steak or hamburgers.

You also need to think about whether you want the ease of a propane-powered oven or prefer cooking with wood. Gas provides instant gratification, notes Hillebrand, but wood will give you more options when it comes to adding that great smoky flavor many associate with a Napoli-style pizza, despite taking longer to heat up and cool down.

Other questions to ask: How often will you use it? Do you plan on cooking in cold weather? How much space do you have? A massive pizza oven requires a fairly large setup, while an Ooni or Solo Stove can sit on top of a table. Also, how important are aesthetics? It’s no surprise that some of the prettiest pizza ovens—the $5,900 Alfa Outdoor Fire Yellow Allegro oven immediately comes to mind—are also the costliest.

Luckily for the consumer, says Hillebrand, pizza ovens appear to be in ample supply now that the pandemic’s supply chain issues are largely in the rearview mirror, and a growing number of companies are joining premier brands such as Forno Bravo and Alfa as options.

Whatever you choose, it’s one of the best appliances for a home chef, he says, because cooking is often about the experience. “And it’s just different than what you’re used to doing,” as well as eye candy for family and friends.

A great pizza requires great ingredients, and it’s a good idea to have delicate, flavorful dough at hand when you’re ready to fire up your oven. Wright swears by a classic, cold-proof pizza dough she adapted from Ooni’s website because it can rest in the refrigerator for up to three days. You also can divide the dough into balls and freeze them until ready to use — a huge time saver for busy home cooks.

Just be sure to allow the dough to rest on the counter for a short while before popping it in the oven. If it’s too cold, it shrinks, says Chris Hayes, and if it’s too warm, you won’t get those great, hollow air bubbles you’re looking for.

You’ll also need a proper peel for turning the pizza, and an infrared thermometer to measure the oven’s temperature.

When it comes to creating the toppings, the general rule is to have fun and be creative!

“Any leftover can be turned into a delicious pizza,” Wright says. Leftover sautéed shrimp makes a wonderful topping with a thin spread of ricotta, garlic, oil, and mozzarella under the shellfish, she says. Wright has also combined leftover pulled pork with barbecue sauce, Cheddar, and a sprinkling of red onion and chopped cilantro.

She also loves to spread fig butter or preserves on a crust, then cover it with shredded mozzarella and thin slices of prosciutto. After cooking, she adds a handful of arugula, a drizzle of hot honey, and a dusting of Maldon salt.

If making dough isn’t your thing, no problem. Most pizzerias will sell you a ball of dough for a couple of bucks, and Solo Stove makes pizza night even easier with its new Neapolitan Artisan Pizza Box. Each includes 12 or 24 dough balls and toppings to go with it.

Wright always uses a kitchen scale when preparing the dough, which she adapted from a recipe on the Ooni website.

Place flour and salt in a large mixing bowl (or the bowl for a stand mixer), then stir in the water/yeast mixture. If using a stand mixer, use a dough hook on low speed, continue to mix for 8 minutes until dough is firm and stretchy. Cover the mixing bowl with plastic wrap and place in the refrigerator for 24 to 72 hours.

If mixing by hand, stir with a wooden spoon until dough starts to form. Continue to mix by hand until a ball starts to form, then turn onto a lightly floured surface and knead by hand for 10 minutes until the dough is stretchy. Return the dough to the bowl, cover with plastic wrap, and place in the refrigerator for 24 to 72 hours.

After 1 to 3 days in the refrigerator, the dough should have doubled in size. Remove and divide into 4 equal balls (each around 240 grams). Roll each ball on the counter. If using that day, cover with plastic wrap and allow to rise again while coming to room temperature (this can take several hours). If you plan to freeze the dough, place each ball in a zip-top freezer bag, label it, and place in the freezer until ready to use. When removing the dough to use it, it can thaw and rise in the refrigerator or at room temperature.

Once the ball of dough is at room temperature, you’re ready to stretch it into a crust. Place the ball on a lightly floured surface and use your fingertips to press the dough outwards while spreading it with your fingers. It takes some practice, but you should be able to pick up the dough up and rotate it like a steering wheel, pinching it around the edges and allowing gravity to pull it down to form a 12-inch circle.

You should continue stretching the dough until it is very thin. If any holes form, you can easily pinch the dough back together. Place your crust onto a lightly floured pizza peel to start adding your toppings.