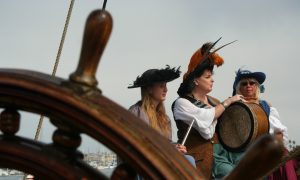 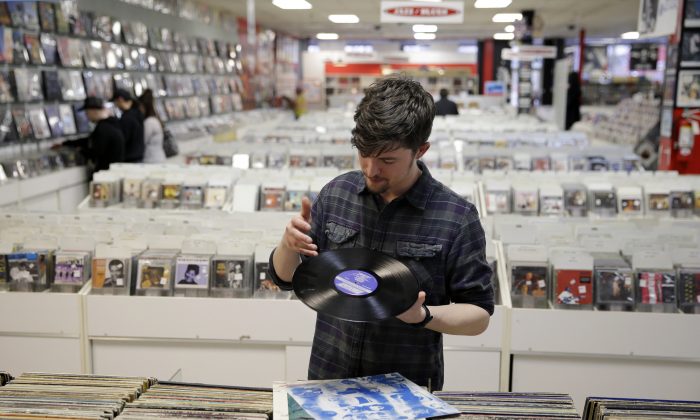 Record clerk Josh Kelly wipes a dust speck from a used LP record as he put it in a sales bin at Vintage Vinyl Records Tuesday, in Fords, N.J., on April 14, 2015. (AP Photo/Mel Evans)
Life & Tradition

Back on Record – the Reasons Behind Vinyl’s Unlikely Comeback

In a music buying industry now dominated by iTunes and music streaming sites such as Spotify, Napster, Pandora and Jay-Z’s recently released Tidal, the CD and physical music store are reportedly in sharp (and potentially terminal) decline. But a curious development in music consumption has seen vinyl, the format ostensibly rendered extinct by the compact disc with its “perfect” digital sound, make an unlikely, but significant cultural and commercial comeback.

In an era in which even digital album sales have fallen, vinyl has bucked the trend. In 2014, record sales grew by more than 50% to hit more than a million, the highest since 1996 – and the upward curve has continued in 2015.

Of course, there were those who never lost faith in the format. Vinyl is at the heart of Record Store Day, an event created in 2007 when some 700 independent record stores in the US combined to celebrate music retailing and the passion for music collecting. Now also a firm fixture in the UK, on April 18 Record Store Day annually collaborates with musical artists to release special edition CDs and vinyl that are strictly exclusive to the day. The event is now even more buoyed in the wake of the renewed enthusiasm for tracks on wax.

On one level, this resurgence could simply be the latest manifestation of a contemporary condition – what the music commentator Simon Reynolds dubs “retromania“. Old bands are reforming, new artists building their sounds and looks on classic acts, and enthusiasm for the fashions and cultural paraphernalia of the past is endemic. The revival of vinyl could be similarly motivated by mere nostalgia for the antithesis of digital streaming: large and fragile discs in cardboard sleeves that manifest a distinctly un-digital crackle when played on the similarly redundant technology of the record player.

But nostalgia is arguably only part of the story. Because the demand for vinyl in the UK has been so pronounced it has recently spawned an official vinyl LP album and singles chart, launched on April 13. Significantly, the first #1 album of the chart was Future Hearts by the contemporary US pop/punk band, All Time Low. The majority of the Top Ten is similarly modern: Sufjan Stevens, Turbowolf, Nadine Shah and James Bay, but with a suitable nod to the old guard with the presence of Van Morrison.

In a wider context, the highest-selling albums of 2015 so far do reflect a distinctive fusion of nostalgia, with classic albums by bands such as Led Zeppelin, Pink Floyd and Bob Dylan mixing with modern acts such as Arctic Monkeys, Noel Gallagher’s High Flying Birds and Royal Blood. But long-established established artists of the calibre of Madonna, Daft Punk, Björk, and Jack White are also present within the resurgence and are releasing vinyl versions of their new albums. So, if nostalgia is not the sole driver for vinyl’s significant commercial comeback, what is?

A major technological characteristic cited in the comeback of vinyl is its distinctive lack of audio cleanness and perfection – what fans call the “warmth” of the vinyl sound. This apparent audio feature is produced by the flaws inherent within analogue sound production, due to – as sound engineer Andreas Lubich explains – “distortion, and in the best case, harmonic distortion”.

The sound of vinyl is also arguably more immersive. This is a factor explored by DJ, Colleen Murphy, who has set up a series of public listening events in a variety of locations chosen to maximise the acoustic impact of the music (including churches). LPs are played in their entirety, a key element in the contemporary pleasures of the format.

The revolutionary design feature of CD players was their ability to enable listeners to skip tracks and reshuffle albums. Vinyl, on the other hand, was and is different. Track skipping is a tricky business and, due to the fragility of the discs, you run the risk of dropping the stylus and causing damage. Consequently, the album as a track-by-track experience (as intended by the artists and central to the listening experience of classic LPs such as Dark Side of the Moon) has returned.

Media artist Jesse England also subscribes to this sense of “reverence” for the complete album immersion – he goes as far as to describe record players as “altars” for music. He has even invented a vibrating plastic disc that enables people to play digital music (via Bluetooth) on any record player, giving it that distinctive imperfect analogue sheen.

Similarly, the vinyl “renaissance” has led to the production of technological analogue/digital hybrids, such as portable attaché case-style record players that include USB ports for digitally recording vinyl, crackles and all.

Vinyl not only sounds different, but it also has a possessive quality that intangible downloads and streaming lacks. As Simon Reynolds notes, the iPod looked set to do away with “record collecting in the traditional sense”, but collecting is actually an intrinsic part of vinyl’s allure. An LP is an object and one that comes with a certain “ritual” behaviour, from the opening of the sleeve and the gentle handling of the disc, to the aesthetic qualities of the cover and the inner sleeve designs with its artwork (often considered to be art and diminished on the smaller CD case) and printed lyrics.

But it’s crucial to acknowledge that the significance of vinyl sales is not overstated. While the rise is undeniably impressive, it’s not that significant in terms of the units sold in digital formats. As Martin Talbot, the chief executive of Official Charts, acknowledges, the consumer-base for vinyl is “still a niche audience”.

This assessment also raises one of the most significant barriers to the triumphant return of vinyl: the manufacture of LPs. Given its near-obsolete status until comparatively recently, the technology required to manufacture vinyl has been difficult to access, given that very few factories produce records. Presses have been in short supply because they barely exist.

As a recent Wall Street Journal feature reported, in 2014 90% of raw materials for vinyl production were produced by one company. This means that the future of vinyl production will require considerable investment from record companies in the re-production of expensive technology. Given the decline of the bricks-and-mortar record store within the retail landscape, distribution will also be a decisive consideration if the upsurge in demand for vinyl is to be a sustainable one.

But to quote Martin Talbot again on the current magnitude of vinyl sales: “To grow at the rate it is, there’s clearly something happening here.” Many other industry experts agree. It seems that many music fans are set to continue putting the needle on the record, which is very good news for the future of Record Store Day.