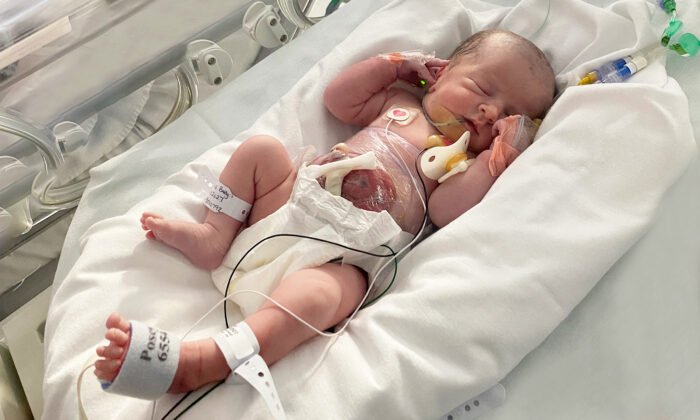 A mother of four was left terrified when she was told during her pregnancy that her baby girl would be born with her intestines on the outside of her body. However, the now-11-month-old girl, who received reversal surgery to reinsert her small and large intestine into her body, just has an outie belly button to show for it.

Mom Laura Woodward, 24, and dad Adam, 30, a dry liner, from Clitheroe, Lancashire, England—who were already parents to Ava, 7, Zachary, 5, and Tommy, 2—knew they were having a little girl thanks to an eight-week gender test in May 2020. The couple was excited to add the “final piece” to their family.

“I wasn’t worried because I’d done it all three times before with my other children,” Laura, a care assistant said. “I knew the process, and my other pregnancies had been so smooth, so I didn’t have any reason to think this time would be any different.”

However, their excitement turned into a reason for worry when the sonographer at Blackburn Hospital revealed their unborn baby had a rare birth defect during the 12th-week scan in June 2020.

“They just looked at me and told me they were sorry, it felt like everything went into slow motion,” Laura said. “I didn’t understand what it would mean for our baby, I was just terrified.”

The couple was referred for a specialist scan to gain further insight into their little girl’s birth defect, and doctors confirmed she would be born with gastroschisis, a condition where the intestines happen to grow outside of the body.

“They tried to reassure us but it sounded terrifying,” Laura said. “We were told I didn’t have to continue with the pregnancy if I didn’t want to, but there was no way I wasn’t giving our baby a chance.”

The expectant parents were assured that it was a “high survival rate” and something that could be fixed. However, all they had to do was just hope for the best.

Laura said she found it incredibly hard to remain positive and was unable to enjoy her pregnancy as she had with her previous children due to sheer panic for her unborn child.

However, Laura was finally relieved when she was admitted to the hospital for a planned C-section. Little Millie arrived at 11:11 on Dec. 11, 2020, weighing 5 pounds 11 ounces (2.5 kg) at Alder Hey Hospital, Liverpool.

Describing seeing Millie for the first time, Laura said the medical team wrapped her exposed organs up in clingfilm and allowed Laura to hold her for a bit. This, she says, was all she needed after worrying for months.

Millie received reversal surgery, to reinsert her small and large intestine into her body, an operation that went “incredibly smoothly” at Alder Hey Hospital.

“To look at her now, you’d never think she’s been through so much,” Laura said. “She just has a little outie bellybutton to show for it, and is a little smaller than her friends, but I couldn’t love her more if I tried.”

The proud mother says she doesn’t try to “molly-coddle” her but does her best to protect her, adding “she’s just perfect in every way.”