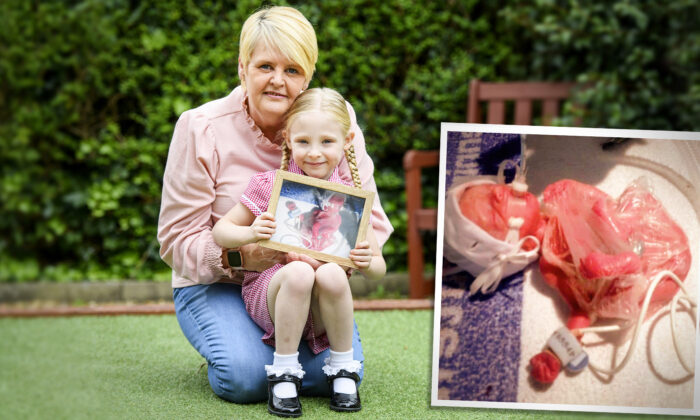 Baby Born the Size of a Bag of Sugar, Kept Alive in Sandwich Bag Is Now 4, Starting Primary School

A premature baby born the size of a bag of sugar, who was kept alive in a sandwich bag, has defied the odds to start primary school.

The little girl had to fight for her life in the neonatal unit at Royal Oldham Hospital in Greater Manchester, until she miraculously came home on Dec. 30 after 64 days in the hospital.

Now despite everything, she is getting ready to start school in September, and mom Gill Glegg, 50, couldn’t be prouder.

“Darcey is amazing,” said Gill, a carer from Littleborough, Greater Manchester. “She was so tiny in that little sandwich bag, I didn’t know if she would make it.

“But now she has defied the odds and she is perfectly healthy.

“It’s so emotional to see her start school.

“We’ve got her uniform and everything ready to go.”

Gill and Darcey’s dad, Mark, 58, who owns a removal van service, realized they were expecting in April 2016.

The pregnancy was smooth sailing until a scan at 28 weeks revealed her baby was not receiving enough blood and there was a placental abnormality.

Gill was immediately rushed to Royal Oldham Hospital for an emergency C-section.

“It was terrifying,” Gill recalled. “I wasn’t given much hope that she would make it.

“But she came out crying.”

Darcey was immediately taken to the neonatal intensive care unit to help her survive the crucial months.

She battled blood transfusions and had to build up strength before she could come home in time for New Year in 2016.

“She was the best present,” the mom said.

Since then, Darcey has defied the odds to become a normal, healthy girl.

“She started walking a bit late, but it was an amazing moment,” Gill said. “She is a dream.”

Darcey has just graduated nursery school and is set to start primary school in December.

“I’ve got all her uniform ready already,” Gill said. “It’s crazy that she is going to school.

“She asks if she is going everyday.

“I still remember looking at her tiny body in an incubator.

“She defied the odds.”

Darcey said she is “really excited to start school,” adding, “I can’t wait to go and play with lots of other kids.”