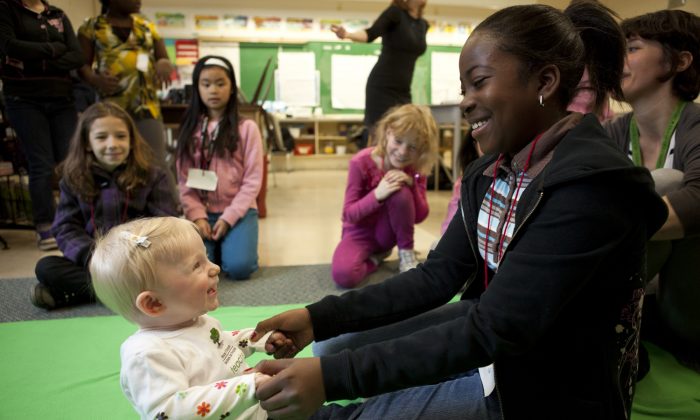 Babies in the Classroom

Understanding the power of empathy, in 1996 Canadian educator Mary Gordon developed a now-famous program to combat aggression in children and provide them with a true model of good parenting.

Called Roots of Empathy, the program seeks to curb violence in society and the rise of bullying and anti-social behaviour in schools by teaching empathy to children from kindergarten to grade eight.

It works like this. Throughout the school year a local parent will bring a two- to four-month-old baby to the classroom every three weeks. A trained instructor runs the program, but the baby is truly the teacher as it visibly grows and develops over the year and engages the children.

During each visit, the class observes the baby as he or she crawls around, plays with toys, or interacts with its parent and the children. The children soon become absorbed in observing the child, who may be smiling, crying, or just sitting and looking around—that is, acting like a baby.

The children can ask questions and discuss the baby’s development, how the baby communicates his/her needs, and how they should respond appropriately.

After the parent and baby leave, the instructor asks the children a series of questions that focus on assessing the baby’s communications and feelings. In this way, students learn about the need for a nurturing relationship and vigilant parenting to enable the tiny person to thrive. Each visit focuses on themes related to the baby’s development.

The structured lessons also ask questions that focus on the children’s own feelings and behaviour. They write their answers down and also draw pictures to help focus on different aspects of themselves. The discussions are inclusive so that eventually a certain trust develops and a culture of respect and caring for others emerges.

Eventually a certain trust develops and a culture of respect and caring for others emerges.

The more the children recognize and understand their own feelings and the feelings of others, the more character they develop and the less likely they are to bully or be cruel. In other words, they develop empathy, which leads to better citizenship and better parenting. As Roots of Empathy says, the program “educates both the mind and the heart.”

Empathy can be defined as the capacity to understand or feel what another person is experiencing from within the other person’s frame of reference.

Disregarding others’ feelings or well-being, for example as in bullying, is the total opposite of empathy. Feelings of kindness, forgiveness, and empathy toward others are emotional strengths that exist innately to varying degrees and are developed through the program.

Gordon tells the story of a 7-year-old boy who had the program in his class.

The boy was living in foster care, and “had not had the benefit of a warm attachment relationship,” said Gordon via email.

“After one of the Roots of Empathy family visits he followed the mom and baby out of his classroom, looked up at the mom and asked, ‘I want to know, where does the love come from?’ Such a simple but powerful question from a child. This young boy was observing and experiencing the loving attachment and empathy between a parent and baby, which is a template for every other relationship that follows.”

Gordon said many school principals are interested in the program, but find it challenging to fit the 27 visits into a busy curriculum. It can also be hard for them to convince the powers that be that children are more open to learning if their emotions are well-regulated.

“We believe it’s important that when children are young they develop their humanity as well as their academics. One of the most important literacies is emotional literacy,” said Gordon.

The curriculum is structured to appeal to the interests and ages of the students. It is divided into four age ranges including kindergarten, grades 1-3, grades 4-6, and grades 7-8. As the children chart the baby’s height and weight and follow his/her growth and development over time, they learn emotional competency and empathy.

She travels the world consulting and speaking on child education and advises educational organizations and governments on parenting. In 2005, she began Seeds of Empathy for kids 3 to 5 years old who are enrolled in childcare programs.

Roots of Empathy is active in all Canadian provinces and is also established in 10 countries including the including the United States where it currently runs programs in New York, Oakland, Washington State, New Mexico, and Washington, D.C. There are also branches in Ireland, Scotland, and New Zealand.

Gordon’s 2005 book on the program is titled “Roots of Empathy: Changing the World Child by Child.”