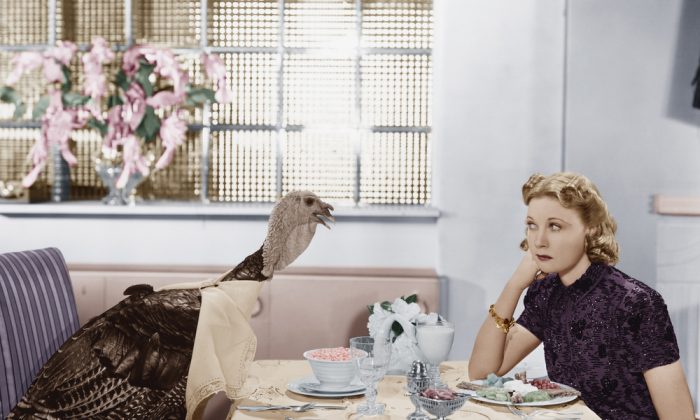 However uncomfortable you’ve felt at the Thanksgiving table as family affairs are aired or awkward remarks are made, these stories will make you glad you weren’t part of these holiday meals.

Here are seven awkward stories, most of which were shared via social media.

The year the cat caught on fire—that Thanksgiving will live in infamy!

We enjoyed a lovely dinner by candlelight, cleared the table and then retired to the living room. As we sat, stuffed and content, we started to smell something burning. Weird, we were done cooking, maybe it was a neighbor?

All of a sudden my mom’s huge white Persian goes ballistic—he had jumped up on the dining room table in search of scraps and brushed up against one of the candles we had left burning! He did not go up like a fireball, just a bit of fur smoldering on his back. He had tons of fur, so no damage done, just a bit of scorching (which really stood out on his white fur!) and kitty trauma. Ah, good times…

2. From the Mouths of Babes

One year, we went to see my mother’s family. I was very little—don’t remember how old I was, but I was telling one of my uncles about how I loved his girlfriend. The woman sitting next to him said, “No honey, I’m his wife now,” to which I replied, “No, his other girlfriend!”

3. You Found What in the Freezer?

I looked in the freezer for some ice cubes at [my] aunt’s house, but then saw her dead cat being preserved until the ground outside was thawed enough to bury it.

When I was a little girl, we had pigeons served to us one year disguised poorly as “little turkeys” by our Italian grandmother.
I found out later that they were some of my former pets that “mysteriously” disappeared from the pigeon coop that week.

Long story short, when I was a kid one of my sisters came to Thanksgiving on heroin.

Here are a couple of lighter ones for comic relief:

My aunt was making gravy at her in-laws’ house for Thanksgiving. She asked her niece, Krista, where the flour was. Krista told her to get the big sack of flour in the pantry. Everyone sat in for the meal and enjoyed the gravy and all the trimmings when it was finally time to eat the pie Krista baked. The first bite was taken and immediately spit out. It was hard as rock. When asked what she had used when making the crust, Krista said she used the flour from the big sack in the pantry. Turns out, it was a big bag of cement.

The gravy went down fine; maybe the cement settled. My aunt thought it had a strange consistency, but figured it was whole wheat flour or some other kind she wasn’t used to.

My great-grandmother’s mashed potatoes were to die for. They were always the last item brought to the long dining table on Thanksgivings. When I was 6, she walked into the dining room and as she approached the table, dropped them. My uncle, who was around 19 at the time dove with his plate in hand and managed to catch them before they hit the floor. A large round of applause followed. That story gets brought up every Thanksgiving.