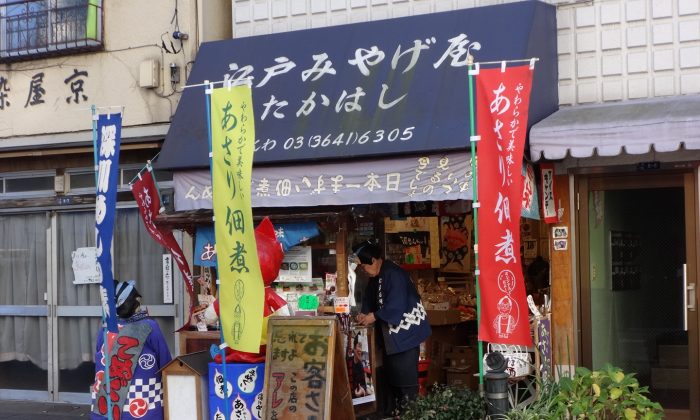 This Dec. 17, 2015 photo shows an old-fashioned candy shop in the neighborhood around the Kiyosumi-Shirakawa metro station in Tokyo. (Linda Lombardi via AP)
Destinations

Away From Tourist Crowds, an Older Section of Tokyo Beckons

TOKYO—Explore Tokyo beyond the crowded tourist highlights and you’ll find many older parts of the city with a different look and slower pace. One of these, the area around the Metro station Kiyosumi-Shirakawa, is a convenient side trip if you’re visiting the Tokyo Skytree, which is four stops away. There’s a charming local history museum, public garden, coffee shops, and a contemporary art museum.

The neighborhood may not be picturesque in the conventional sense but there’s a lot to see if you have an eye for detail and an appreciation for the charm of urban and slightly shabby locales.

From the Metro station, head south and turn right onto an old shopping street marked by two small decorative towers. On your right you’ll see an old-fashioned candy shop where the proprietor dresses in garb from the Edo period (including an entirely unconvincing wig of a topknot hairstyle). Farther along on the left is the Fukagawa Edo Museum.

Most tourists with any interest in history end up at the Edo Tokyo Museum with its indoor re-creations of historic buildings from the Edo era, which began in the 1600s. The Fukagawa museum, which predates the Edo Tokyo Museum, is much smaller and more charming, with a life-size Edo-period town re-created on its lower level. Be prepared to take your shoes off to go inside the little shops and homes, and a guide with adequate or better English will show you how the old-fashioned locks work and how ropes pull a skylight open over a stove. You can even try a rice-pounding device.

The neighborhood is something of a hot spot for coffee shops, but don’t think in terms of grabbing a morning cup of joe. Some of these don’t even open till later in the day.

The guide will also explain how to tell the difference between a nice but tiny house for someone well-off (note the tatami-covered floor) versus a poor person’s home with a mostly bare wood floor and just a couple of rice straw mats.

Lighting sets the mood through 15-minute day-and-night cycles with recordings of birds, merchants calling, and the cry of the animatronic cat on a rooftop.

Walk the small streets and alleys around the museum and you’ll find a mix of residences, shops, small businesses, and light industrial spaces. You’ll find much that is rather old-time Japanese, like restaurants selling the local specialty of rice with clams. But the neighborhood is also something of a hot spot for coffee shops.

Don’t think in terms of grabbing a morning cup of joe. Some of these don’t even open till later in the day, and they’re more about relaxing and making a ritual of it. Some are quite small and the menus may be limited. The one I visited, aside from coffee and tea, had just two cakes and two flavors of small cookies—chocolate and sesame—but the cookies were exquisite.

5 Things to Do in Tokyo

There’s also an outpost of a U.S. chain, Blue Bottle, that caused something of a stir when it opened, with lines reported to be two hours long. Its conspicuous modern building with an industrial vibe and huge coffee-roasting machinery was far calmer on a recent weekday, but it’s still not a place to camp out with your laptop, though people did seem to stay to chat.

If you’re willing to walk a bit farther, you can also have a completely modern experience in this old neighborhood at the Museum of Contemporary Art Tokyo. Two exhibits that just opened are running through May 29: “Loose Lips Save Ships,” exploring freedom of expression, and “Pixar: 30 Years of Animation.”

Kiyosumi Gardens is easy to find on your way to or from the Metro, visible across the main street opposite the entrance to the shopping street near the Fukagawa Edo Museum. It’s a beautiful typical Japanese garden laid out around a large pond, first opened for company use by the founder of Mitsubishi in 1880 (Mitsubishi was a shipping firm at the time), then donated to the city and opened as a public park in 1932. The garden is nice to stroll around, or find a bench so you can simply sit and gaze at the pond.