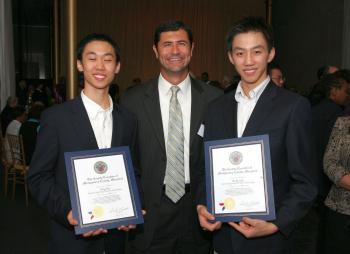 WASHINGTON—As Shen Yun Performing Arts made its debut at the Kennedy Center in Washington on Aug. 25, elected officials presented awards to two of the lead dancers, recognizing their recent achievements.

“I congratulate you on your outstanding and award-winning performance in the male junior division of the Chinese Classical Dance category at the Tribeca Performing Arts Center,” wrote Mr. Leggett in a certificate for Mr. Xue.

U.S. Rep. Chris Van Hollen (D-Md.) presented a certificate to Shen Yun Performing Arts and another two certificates to the two dancers, recognizing their contribution to sharing the beauty of Chinese classical dance, a dance system passed down through China’s 5,000 years of history.

Mr. Liao was born into a family of highly accomplished dancers and choreographers. He has received many awards in dance competitions over the years, the most recent one being a co-winner of gold medal in the junior division of NTDTV’s International Chinese Classical Dance Competition.

Mr. Xue has performed in the global tours of Shen Yun since 2007. He was the co-winner of the gold medal, along with Mr. Liao, in the dance competition.

Shen Yun Performing Arts is a premier Chinese dance and music company. It has traveled to more than 90 cities on five continents in 2009, gracing some of the world’s prestigious theaters.