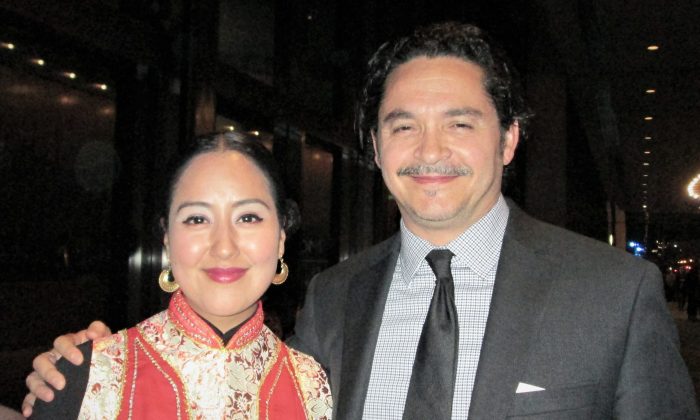 “As an editor, I watched a lot of footage, and I see a lot of performance actually. My job is to piece everything together, so I always looking for the best shots and best images. By far, this has spectacular images. The color is very vibrant, vivid.”

“The music touches the soul. The music vibrates emotions. … The superb composer, the piano number with the singer, very operatic—it is magnificent.”

“All the art design is fantastic, wonderful. The rear projection, the imagery, combining the real action on stage with the actors and going into the background [digital backdrops], animating in a digital world crossing between the two worlds of analog-digital—was fantastic.”

“I love the message of restoring the ancient traditions, the mythology with the Gods and the Divine nature. That’s a wonderful message to embrace the traditions of the past, and to bring them back—so they are living perpetually.”

“I believe this performance is succeeding in capturing the spirit and Divine nature of those old ancient traditions.”

“The energy is fantastic.”

“It’s a great energy of excitement. You see the performers, … they are excited and happy doing what they are doing, for sure. You definitely feel the spirit in them. And we are so close to the stage, we got to share that experience with them.”

“The purity of putting yourself in that state of meditation to truly find peace and the inner self is coming across by the performers.”

“I believe anything spiritual is beneficial, especially during these times where it seems to be non-existent around us.”

“I think more than ever seeking the truth through tradition and bringing that back, and maintaining the spiritual consciousness, is absolutely imperative.”