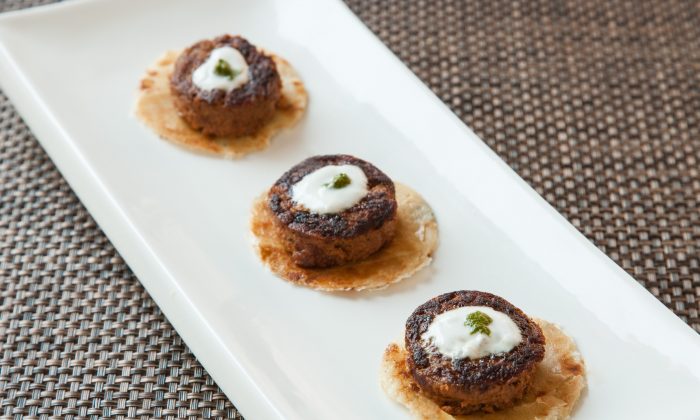 At first glance, Awadh does not reveal itself entirely. It is a small and chic bilevel cozy place with a small bar by the entrance, with a cascading bubble glass chandelier descending from the ceiling by entrance. The light is subdued, created by the gold pendant lights reflecting against the dark wood paneling and plush banquettes.

As the evening wears on, it turns out to be spectacular. The food, and the passion with which it is prepared, changed my perception of what I know Indian food to be here in New York City. My relationship with Indian cuisine is now tied up with a knot of love that will never be broken.

The Man Behind Awadh

Restaurateur and chef Gaurav Anand comes from a family of lawyers and restaurateurs from New Delhi. Although he graduated with a business administration degree, he was passionate about food.

A life-changing incident while working for his brother’s catering business in India made him realize that he had to learn how to cook. At one event, he was wondering why there was a delay in the food preparation. When he inquired about it in the kitchen, the chef challenged him to cook the food himself if he did not like the pace. And so he started learning to cook, learning by watching chefs and recreating their recipes.

While traveling in northern India he fell in love with the flavors and cuisine of the Awadh region and its dum pukht slow cooking style.

Awadh’s food is influenced by the many empires that ruled the region, from Mongolians to Moguls. It was the cuisine of India’s rulers.

Although you will find vegetarian dishes, the focus is on meat. It is cooked in a traditional sealed handi over a low flame for many hours to allow deep, complex flavors to develop. Mostly cooked with ghee, milk, and cream with strong emphasis on legumes, lentils, pulses, milk, curd, and buttermilk instead of water, yielding elegant and refined dishes you will salivate over.

The friend I have brought for dinner is busy navigating the menu. She looks content, although I was hesitant to invite her because she is not usually interested in food.

An array of dazzling appetizers arrived, starting with one of the most interesting ones, Galouti Kebab ($11), which was once served to the royals of Awadh. The small lamb patties were light with a smooth consistency I’d never experienced, the result of having been minced at least 10 times over.

They were soon followed by the tender and delicious Awadh Murgh Tikka ($10), grilled chicken that was marinated for at least eight hours in a black pepper and pomegranate marinade.

It was as if I heard angels sounding their trumpets when I tasted the succulent and delicious mustard-marinated lamb chop, Chaap Ka Barrah ($14). The flavors were already satisfying our palate but it also had a gentle heat that lingered toward the end for a playful and pleasing aftertaste.

My non-foodie friend was devouring everything with joy and excitement. She said, “I must be possessed because I am eating so much.”

The elegant and refined Uri Jheenga ($21), shrimp smothered in a coconut curry sauce, made me feel as if I had entered the land of immortality. The combination of spices with their distinct flavors and heat were beyond ordinary.

We had become captivated and enthusiastic fans when another lip-smacking dish arrived: Lagan Ki Raan ($20), a leg of lamb marinated for eight hours in a bouquet of spices including saffron with a touch of pomegranate sauce. It was a real seducer.

Looking over, I was stunned to see how much my friend had eaten and how she was wiping the dishes with the garlic naan.

Consulting sommelier John Slover (Daniel, Cru, Charlie Bird) curates a smart selection of wines to pair with the intricate flavors of these dishes. There are also creative cocktails that play on Indian flavors, including the zesty An Indian Summer with rum, mango puree, muddled lime, mint, and fresh green chilies and The Nawab with tequila, fresh tamarind pulp, and black salt from the Himalayas.

Overall it was an unforgettable journey that I will repeat soon.