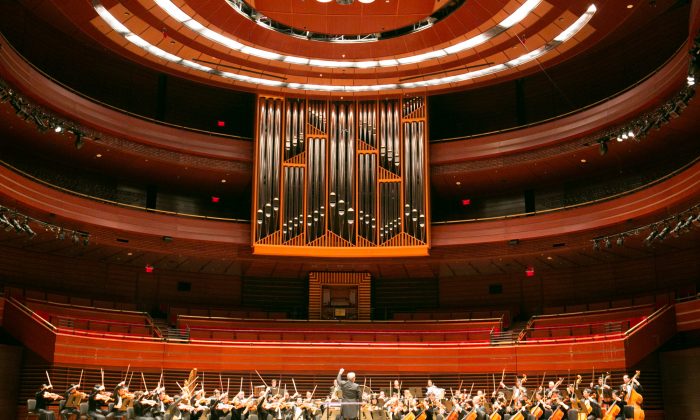 PHILADELPHIA—The percussion section in the far back of an orchestra is often where one finds the most exotic of instruments that set the stage for a unique sound.

The gong, now used in many orchestral pieces, was joined by pengling hand bells and wooden blocks (originally used in sacred music in temples) on stage in Shen Yun Symphony Orchestra to create distinctly Chinese music with a full Western symphony.

“Outstanding,” said Mr. Dawley’s wife Vivian Echeverria, a biochemist, commenting that the blend of East and West was perfect. “It was very smooth, as if it was natural.”

The couple attended the performance at the Kimmel Center on Oct. 25 in Philadelphia. Both are frequent symphony concertgoers and great appreciators of music, and said they had never experienced anything like Shen Yun Symphony Orchestra before.

“I found it very exotic,” Mr. Dawley said. It is not very often they hear Chinese music, especially not through symphonies, he explained. “But live, it’s much more—enlightening.”

Ms. Echeverria described the music was “very soothing to the soul.”

“It made me happy,” she said, explaining that the strings gave off a joyful feeling, and the percussion added to all the excitement.

Though the two delighted in seeing the two-stringed erhu performed by virtuosos, and the variety of Chinese instruments blended into the ensemble, the Chinese sound went beyond that.

Even the violins, Ms. Echeverria said, were played in a way she had never seen or heard before.

Shen Yun Symphony Orchestra has been touring for four years now, and performs Western classics like Tchaikovsky along with a repertoire of original compositions, where trombones mimic long Tibetan horns and the full Western symphony plays on a pentatonic scale in pieces to bring about scenes from 5,000 years of Chinese civilization.

The orchestra follows the same mission as New York-based Shen Yun Performing Arts—to revive the divinely inspired Chinese culture. Shen Yun means “the beauty of divine beings dancing,” and, according to the program, both the orchestra and its parent company aim to create an experience “so profoundly beautiful and joyful that it evokes a sense of the heavens.”

“I feel fulfilled,” Mr. Dawley said. “It was a unique experience. It left me wanting to hear more, for sure.”