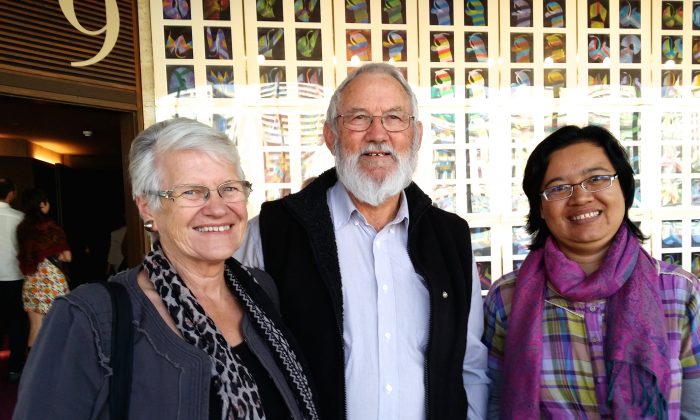 Dr. Rosnida Sari was in the audience with a couple she lovingly refers to as her parents in Adelaide, Geoff and Joy Simpson. Originally from Banda Aceh, Indonesia, Ms. Sari graduated with a Doctor of Philosophy from Adelaide’s Flinders University this week. She was named Oasis Ambassador for 2013. She said Oasis bridged the gap for her to learn about Australian living, allowed her to meet the Simpsons and helped her launch her book, Traveler Perempuan.

Ms. Sari said Chinese traditional culture was something she knew very little about. She said she is keen to learn more about China’s divine culture that has a history of 5,000 years, so she was very happy to see Shen Yun.

“I love it, I learnt something different from my own culture,” she said. “By seeing this I think I want to learn more about them … it’s really beautiful. I don’t know whether they have dancing like that at home [in China].”

Shen Yun cannot be seen in China today, where traditional culture has been nearly lost. Yet Shen Yun—a non-profit organization—has become an international phenomenon, bringing the wonders of ancient Chinese culture to millions across the globe, says the company’s website.

Ms. Sari could see that Shen Yun is helping create understanding between various ethnicities through song and dance.

“I think it’s good to bridge the mutual understanding between the Chinese people and the Australian people, and they watch it and it’s really nice to see how cultures want to know about other cultures. And this is a good way to promote your culture, through cultural things like dance or singing.”

The Shen Yun Orchestra masterfully blends two of the world’s greatest classical music traditions. The Western orchestra with its energy and grandeur, and the Chinese instruments with their distinct tones and styles, creating a dramatic new sound, according to its website.

Mr. Simpson was especially awestruck by the rhythm and sound of the drumming during the performance.

“I love the drums, the drums are my things and the rhythm is great,” he said.

Mrs. Simpson, a retired school services officer, could only marvel at the beauty and discipline of the dancers in Shen Yun.

“I think it’s colourful, and I love the choreography … and the precision of the dancers and the costumes are just glorious, and it’s nice to learn that this is the older culture from the Chinese, and their traditional dance.”