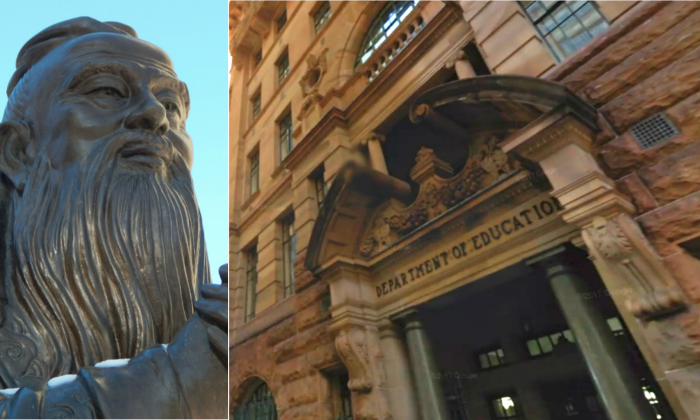 The NSW Department of Education in a review report issued late Aug. 22 (pdf) acknowledged that there exists a “perception that the Confucius Institute is or could be facilitating inappropriate foreign influence in the department.”

It recommended that the department “take action to ensure that there is no perception of inappropriate foreign interference in NSW public schools and the department.”

The perceived risks included having CCP officials on the Board of Directors, and having to abide by Chinese laws, which the department said had “the potential to conflict with the department’s Controversial Issues in Schools Policy.”

Under the Australian government’s new Foreign Influence Transparency Scheme, which came into effect late 2018, however, this arrangement would equate to foreign interference in a government body.

Charles Sturt University’s public ethics professor, Clive Hamilton, a vocal critic of the CCP, said of the announcement, “This was always a no-brainer. Now the NSW Department of Education will not have to register as a foreign agent.”

This was always a no-brainer. Now the NSW Department of Education will not have to register as a foreign agent. https://t.co/06E3JStlKy

The agreement is to end with the 2019 school year, to be replaced by a $1.2 million locally funded program until at least the end of 2022.

The department said the investment will make sure the students of the 13 Confucius Classrooms continue learning the Chinese language from local Chinese-speaking teachers—something that more than 10,000 petitioners demanded back in 2011 before the CI was approved.

While the review concluded there was “no evidence of actual political influence being exerted by the Chinese government through the Confucius Institute in NSW public schools,” it also pointed out several points of concern.

“The primary concern is the fact that NSW is the only government department in the world that hosts a Confucius Institute and that this arrangement places Chinese government appointees inside a NSW government ­department,” the review says.

The report acknowledged that parents, academics, and politicians have questioned the transparency and appropriateness of the arrangement between the department and Hanban.

Hanban, which oversees CIs around the world, is also known as the Office of Chinese Language Council International. Hanban is directly affiliated to the CCP’s Ministry of Education. All aspects of operations, from hiring teachers to teaching materials, are controlled by the CCP’s ministry.

“Under the agreement with Hanban, schools receive an establishment grant of US$10,000 for opening a Confucius Classroom and also receive free teaching materials (books and audio visual material) from Hanban,” the NSW government review stated. “The volunteer teacher is also a significant resource provided by Hanban.”

According to a 2010 People’s Daily article, Chinese minister of propaganda Liu Yunshan openly said to his comrades regarding CIs, “Coordinate the efforts of overseas and domestic propaganda, [and] further create a favorable international environment for us.

“With regard to key issues that influence our sovereignty and safety, we should actively carry out international propaganda battles against issuers such as Tibet, Xinjiang, Taiwan, human rights and Falun Gong. … We should do well in establishing and operating overseas cultural centers and Confucius Institutes.”

Discriminatory hiring practices and espionage have also been reported.

“The fact that numerous questions have been raised … speaks to the conclusion that some see this arrangement as potentially compromising the department’s governance,” the report stated.

“To informed observers, the placement of an institute with foreign government involvement inside a government department is both unwise and problematic within the good governance expectations of our democratic political system.”

Associate professor in China Studies at the University of Technology Sydney, Dr. Feng Chongyi, told The Epoch Times the latest move by the NSW Government is a positive one and that he had always been opposed to having CCP-appointed officials oversee classroom operations in NSW “for a little profit.”

“In Confucius Institutes, not only are you not allowed to talk about anything not in the CCP’s interest, you cannot even say anything bad about the CCP—you cannot make any critical comments about the government. This is harmful to the core value of our democracy, freedom, and legal system,” he said. “It’s not appropriate even between democratic allied countries, let alone between the CCP and Australia.”

Feng added that given the trend of U.S. and Canadian universities using subtle ways to close down CIs, like not renewing contracts, “I’d expect universities in Australia follow soon.”

Henry Jom, Melanie Sun, and Reuters contributed to this report.