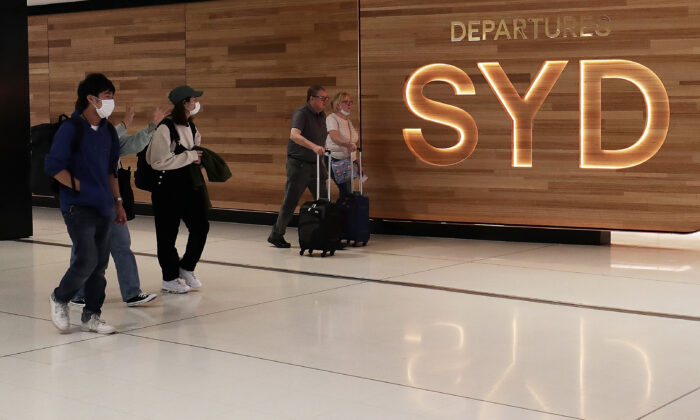 Travellers walk towards the departures gate at the International Airport in Sydney, Australia on March 25, 2020. (Mark Metcalfe/Getty Images)
Australia

Australia to Open International Border to the World Again

Australia will open its international border in November after 18 months of tough border restrictions.

Prime Minister Scott Morrison announced on Friday the detailed plan to lift the international travel ban. States and territories will reopen at varying rates, depending on when they hit the 80 percent double-dose vaccination goal.

New South Wales (NSW) is likely to be the first one to open its international border, with a date of reaching the 80 percent vaccination goal forecasted on Oct. 25.

“It’s time to give Australians their lives back,” Morrison said in the press conference. “We’ve saved lives. We’ve saved livelihoods, but we must work together to ensure that Australians can reclaim the lives that they once had in this country.”

Fully vaccinated Aussies can leave or enter the country at will. Unvaccinated will still be restricted by travel caps.

Returning citizens and permanent residents fully vaccinated with a vaccine recognised by the nation’s drug regulator, the Therapeutic Goods Administration (TGA) will also be able to quarantine at home for seven days, while others will be required to quarantine for 14 days.

Those who are under 12 or have medical exemptions will be treated as vaccinated.

Australians leaving the country are promised to have a vaccine document that is internationally recognised.

The TGA will also recognize two new COVID-19 vaccines as recognised vaccines, China’s Sinovac and India’s Covishield, for those entering the country. The TGA will however not recognise China’s Sinopharm vaccine.

Australian universities have been urging the government to approve Chinese vaccines so that Chinese international students, a key market for the nation’s education sector, can return to Australia.

Australia shut its border on Mar. 20, 2020, with citizens and permanent residents needing government-granted exemptions to leave the country. Those who return are required to go through a 14-day hotel quarantine upon arrival, which costs over $3000 (US $2166).

The NSW government has indicated that it would like to welcome thousands of Australians back when borders reopen. Currently, over 45,000 Australians are still stranded overseas waiting to come home.

The federal government is also working on quarantine-free travel with countries like New Zealand, Singapore, and the South Pacific region. Qantas, Australia’s major airline, has already scheduled the first batch of international flights for vaccinated passengers. The flights will depart from Sydney, Melbourne, and Brisbane, with destinations including London, Los Angeles, Honolulu, Vancouver, Singapore, Tokyo, and Fiji.