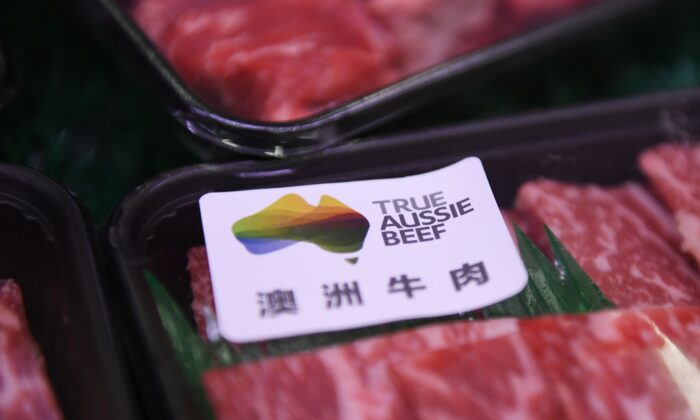 Australian beef is seen at a supermarket in Beijing on May 12, 2020 (Greg Baker/AFP via Getty Images)
Australia

Australia and Japan will likely oppose China’s bid to join one of the world’s largest trade agreements unless it halts its economic coercion campaign targeting Australian exports and resumes diplomatic contact.

Beijing announced on Sept. 16 that it had formally applied to join the Comprehensive and Progressive Agreement for Trans-Pacific Partnership (CPTPP) in a letter to New Zealand Trade Minister Damien O’Connor.

Australian Trade Minister Dan Tehan said China could not join the CPTPP until members were convinced of a “track record of compliance” with existing trade and World Trade Organisation (WTO) agreements. It would also require Beijing to resume high-level dialogue with Australia, he told Newscorp’s Weekend Australian.

“CPTPP parties would also want to be confident that an ­accession candidate would fully implement its commitments under the agreement in good faith,” Tehan said.

“As we have conveyed to China, these are important matters which require ministerial engagement.”

“Japan believes that it’s necessary to determine whether China, which submitted a request to join the TPP-11, is ready to meet its extremely high standards,” he told reporters on Sept. 17.

Japanese Deputy Finance Minister Kenji Nakanishi suggested on Twitter that same day that Beijing’s subsidiaries of state-owned enterprises and its arbitrary application of law would hinder efforts to join CPTPP.

“China … is far removed from the free, fair and highly transparent world of TPP, chances that it can join are close to zero,” he wrote in a Twitter post. “This can be thought of as a move to prevent Taiwan from joining.”

A U.S. State Department spokesperson said the department could not comment directly on China’s bid but noted: “We would expect China’s non-market trade practices and China’s use of economic coercion against other countries would factor into CPTPP parties’ evaluation of China as a potential candidate for accession,” according to Reuters.

Since April 2020, Australia has weathered an ongoing trade coercion campaign from Beijing after Foreign Minister Marise Payne called for an investigation into the origins of COVID-19. The move drew a sharp rebuke from Chinese Ambassador to Canberra Cheng Jingye, who warned of potential action against Australia’s trading relationship with China.

In the following months, the Chinese Communist Party (CCP) implemented a series of bans, suspensions, and regulatory hurdles on Australian coal, wine, beef, barley, lobster, timber, lamb, and cotton exports to the country.

Australian Treasurer Josh Frydenberg said the result was a $5.4 billion drop in trade exports over the year to the June quarter. However, during the same period, “exports of those goods to the rest of the world have increased by $4.4 billion,” he told the Australian National University’s Crawford Leadership Forum on Sept. 6.

Besides diversifying trade to other nations, Australia has launched two actions via the WTO over the wine and barley tariffs.

Beijing has responded with a flurry of WTO actions against Australian tariffs implemented several years ago on Chinese goods including tariffs on wind tower imports in 2014 (valued at 10.9 percent), railway wheels in 2015 (17.4 percent), and stainless-steel sinks in 2019 (60.2 percent).