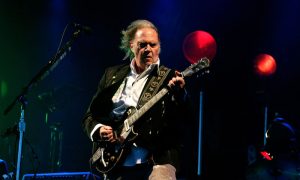 “It's more than I expected. I've never seen Chinese dancing before. This is a first. It does tell a story even though you can't understand it. I guess that's the beauty of it,” she said.

Ms. Dobbs was speaking of the classical Chinese dance which the New York-based company is known for. Each dance tells a different story, from ancient legends to the present-day, and together enrich viewers with a presentation of 5,000 years of Chinese culture.

“I can't tell the primary dancers from the others because they're all so exceptional,” she said.

In particular, Ms. Dobbs appreciated the strength and agility of the dancers. She joked, saying that she’s in an exercise class and in comparison to the leg squats she does, she really appreciates their physical prowess. “It's amazing, I admire them tremendously.”

Classical Chinese dance is one of the most demanding and expressive dance systems in the world, requiring difficult techniques of spins, turns and flips.

Lanny Wong, a former firefighter and paramedic, described the performance as excellent, inspiring and magnificent.

Mr. Wong agreed with Ms. Dobbs, saying, “Besides the costumes and the choreography, it's amazing how talented these people are.”

But what he’ll take away with him are the cultural aspects. “Being Chinese, it brings back some of the heritage of cultural dancing,” he said.