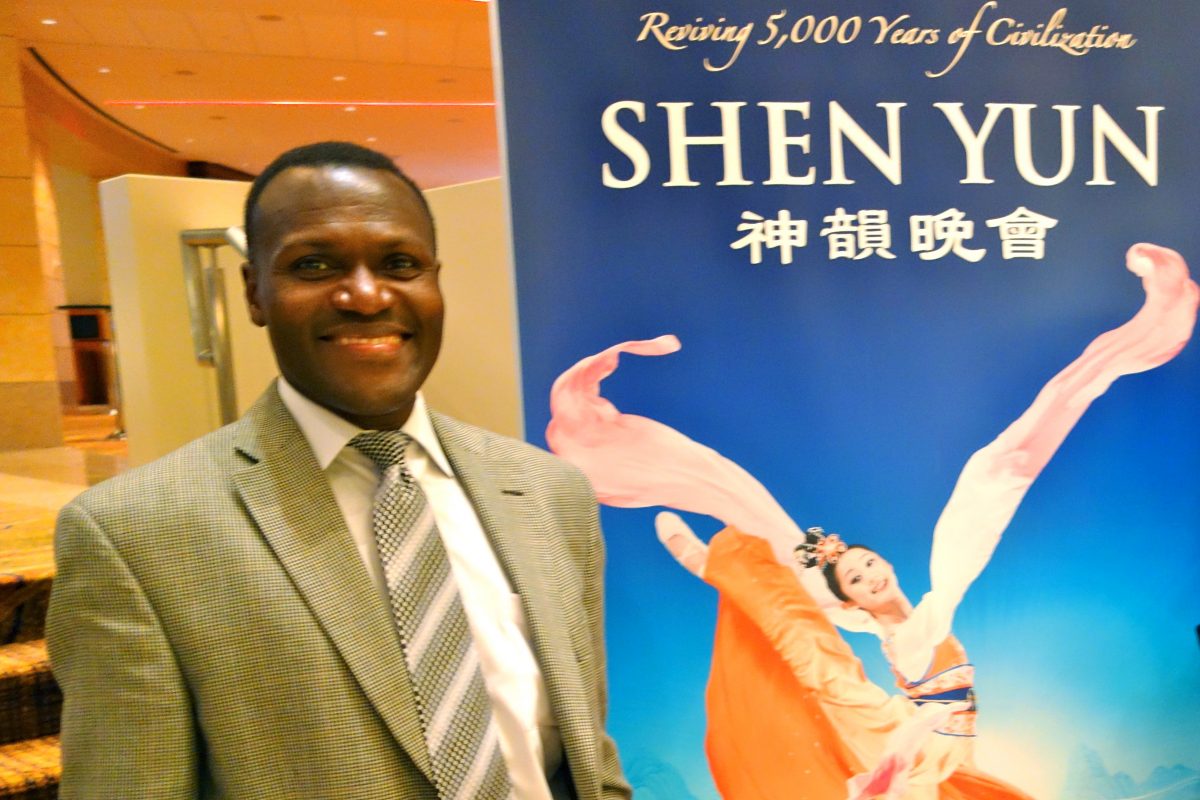 Mr. Otswila Nawade never misses Shen Yun Performing Arts when it visits Atlanta. He is in the lobby of the Cobb Energy Centre in Atlanta on Dec. 29. (Mary Silver/Epoch Times)
Shen Yun

ATLANTA—Last year, Mr. Otswila Nawade said that that Shen Yun inspired him with perfection. He returned for a fifth time on Dec. 29. “I still come. I still come,” he said. “I come here, and when I leave, I’m so inspired—I’m ready to move on into the New Year with the plans I made.”

Mr. Nawade is a software engineer with a major multinational company. Because Shen Yun is so special to him, he spreads the word. “When this came, I gave a few of my friends the brochures,” he said. “They might even be here tomorrow, or they may be here yesterday.”

He brought one friend with him. “Just like every other show, I was just talking with my friend here about how it is so inspiring, every time—and then the perfection. In fact, we were just talking about it; I say, ‘How long does it take them to do everything to perfection?'”

He added that he hopes the artists keep up the good work. “They are still as inspiring as they’ve always been from the very first show that I saw.”

According to the Shen Yun website, “Classical Chinese dance is a culture left to us by the ancients who came before us, its beauty should be riches shared by all of humanity, its purity should not be contaminated.”

The art form requires it artists to master challenging techniques. “Technical skill in classical Chinese dance refers to a series of highly difficult techniques, including jumping and leaping, turning, and flipping. These techniques serve to enhance bearing and form,” the website reads.

It’s not just the athleticism, the music, and the choreography that inspires Mr. Nawade: It’s the meaning contained in the art. He said, “Another thing, they are so spiritual. Yes, that is something good. That is something that is lacking. They talk about China, but even here we don’t have enough of that—spirituality. They are so deep in that—I like that.”

Mr. Nawade’s friend Maribel Sanchez, an accountant, had also seen Shen Yun once before. She shares his enthusiasm. “I love the colors, music. Everything is—it’s perfect. I just enjoy it. It’s the second time, and I will come back to see it again.”