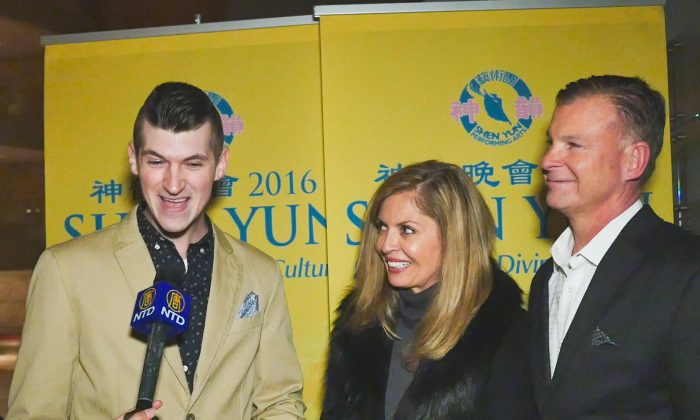 Keith Bowers spoke of the music being so good that, were it not for the fact they could see the orchestra playing, he would have thought that the music was a recording.

“I loved it. It was phenomenal. It was just amazing,” he said.

Sharon Bowers concurred, saying that she also enjoyed the colors, the costumes and the way that the dancers synchronized together. “I loved it. I thought it was magnificent,” she said.

Chase Bowers felt that the name of the company was reflected in the dance and the choreography.

Shen Yun means “the beauty of divine beings dancing,” according to the company’s website. The character Shen is a general term for divine being while Yun, in this context, “refers to the entire bearing of an individual—the subtleties of one’s every movement—the expressions of one’s body language.”

Chase Bowers mentioned that the performances were “all encompassing—history, modern day as well, music, dance, the colors—it was luminous—it was very beautiful,” he said, adding that he really enjoyed it. He noted that he loved the combination of the symbolism, storytelling, and color palette set against the digital backdrops which were “very unexpected.”

The message in the story “The Steadfast Heart” resonated with Chase Bowers. He pointed out that the dance had an important message. It depicts a young family—practitioners of the spiritual discipline Falun Dafa—who maintain their courage and compassion in the midst of despair. “I think it’s needed for all. I thought it was very touching,” he said.

Along the same lines, Keith Bowers mentioned that it’s a shame that the freedom of belief we enjoy in the United States is not enjoyed in other countries, such as mainland China.

Shen Yun Puts It All Right in Your Heart

Retired real estate broker, Faye Martin who attended the Shen Yun matinee on Jan. 17 echoed these sentiments saying: “I’m just engulfed with the beauty of it, but also the sadness of it.”

Ms. Martin was touched by the fact that China’s 5,000 years-old culture was nearly lost. But she added: “It gives me hope that people like this, that are doing this [performance], can fight against it in their way. And even though they can’t even do this in their own country, … they can bring it to us.”

Since the communist party took over in 1949, it has sought to destroy China’s traditional culture and replace it with atheism and oppression. Under the heading “Challenges we face,” on Shen Yun Performing Arts’ website, the company outlines its mission to use performing arts to revive the essence of Chinese culture—traditionally considered a divinely inspired civilization. Their source of inspiration, rooted in traditional Chinese culture, is the spiritual discipline known as Falun Dafa whose tenets are truthfulness, compassion, and forbearance.

Audience members have been overwhelmingly appreciative and sympathetic to this mission as Shen Yun is gaining worldwide momentum to achieve its goal.

“I think the world needs that message. We all do. We need it in this country. We need it everywhere else. And thank you for doing that,” said Ms. Martin to the company members.

On a lighter note, the vibrant hues had such an uplifting effect on Ms. Martin that she was thought of doing away with wearing “drab colors and put on pink and chartreuse.”

All in all, the experience left Ms. Martin profoundly elated.

“We hear about Chinese history, and we think we know it, but when you see something like this, it just puts it all right in your heart, and I’m overwhelmed with it. It’s beautiful, just beautiful. I’m so glad I’m here,” she said.