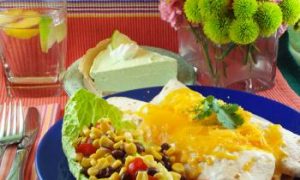 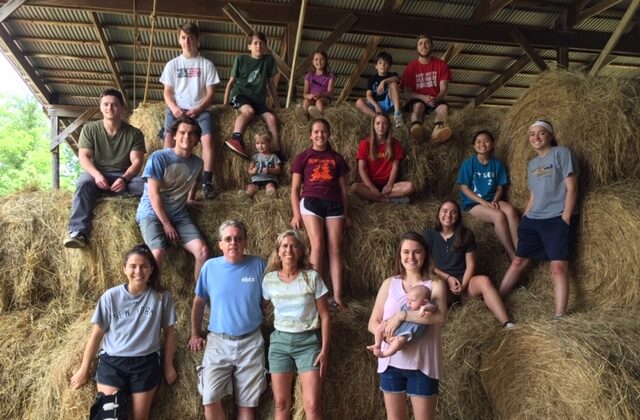 A Case for the Family Meal: At the Wilsons’, Dinner for 15

For centuries, families have gathered to eat and talk. Anthropological evidence from every culture and era show that human beings, by nature, live in families, and their identity and their traditions were kept alive by these family rituals.

When I was growing up, mealtimes were a ritual that we observed strictly. I helped set the table and cleared away the plates. No elbows were allowed on the table, and there was to be no reaching across or talking with one’s mouth full of food. In the olden days—think Downton Abbey—people dressed for dinner.

I worked in a restaurant for many years, and it soon became clear that few bus kids seemed to know how to set a table. They had no idea of where the cutlery was placed or which implements one used. When I questioned a young girl, she said, “We aren’t a sitting-around-the-table family. My dad lives with his new girlfriend. We tend to get takeout whenever,” she shrugged.

These days, it seems there’s a void once occupied by family life.

And so it was with much curiosity and joy that I met and visited with Chuck and Kim Wilson in New Hope, Pennsylvania.

Chuck Wilson is the pastor of the New Hope Community Church. He and his wife, Kim, have 13 children, ranging in age from 2 to 28.

“When all the children were under age 14, we had a family get-together every night,” Kim told me. These days, the multiplicity of schedules and commitments doesn’t allow for a simultaneous gathering, but Kim still prepares a family buffet by 5 p.m. and the Wilson kids trickle in at various times.

“Whatever the number at the dining room table, we talk together and discuss the activities of the day,” Kim said. ”Usually the older kids have some stories to share from school, and we all discuss.”

On Sundays, they are en famille after church. “Someone says grace and then we all eat together,” said Kim.

The Wilsons love to sit together as a family because it gives them a chance to interact with their siblings. Mealtime gives everyone an opportunity to reconnect with each other after a busy week.

“The kids love Sunday meals together,” said Chuck. ”They actually like to be with each other.”

Despite her hectic schedule as a very active pastor’s wife, Kim plans weekly menus and posts them on the fridge so that the kids know what to expect. She’s even put together a recipe book of favorite recipes.

The family favorites are usually reserved for Sundays: a Mexican-themed taco spread; an Italian feast of pasta, meatballs, garlic bread, and chicken parm; brunch complete with eggs, bacon, bagels, and hash browns; or grilled foods, such as hot dogs, hamburgers, or chicken.

“I know when I’m not making enough of the foods that they like,” Kim said. “I’ll get a note—a polite note—saying, ‘Mom, these are some dinners we would like to have.’”

“I love to prepare food that they all enjoy,” she said. “It shows them that I take into consideration their tastes and what they enjoy, and try to have something for each one of them.

“It’s a challenge when there are 15 people eating, but I really do try. Some kids are gluten-free, others don’t eat meat … but we do our best.”

Until the middle of the 20th century, our family was our primary community. Our parents, grandparents, aunts, uncles, siblings, and cousins placed us in society. They provided a community to which we belong. They helped us answer the questions “Who are you?” and “Why are you here?”

These questions are as relevant today as they were then. Family time is precious; this is when memories are made.

It occurred to me as I watched Josh Wilson being sent off to the Philippines to join a Christian ministry at the tender age of 19, that he knows who he is and what his purpose in life is, probably because of his strong roots in a supportive family.

After all, he first spoke of his desires at a Wilson dinner many years ago.