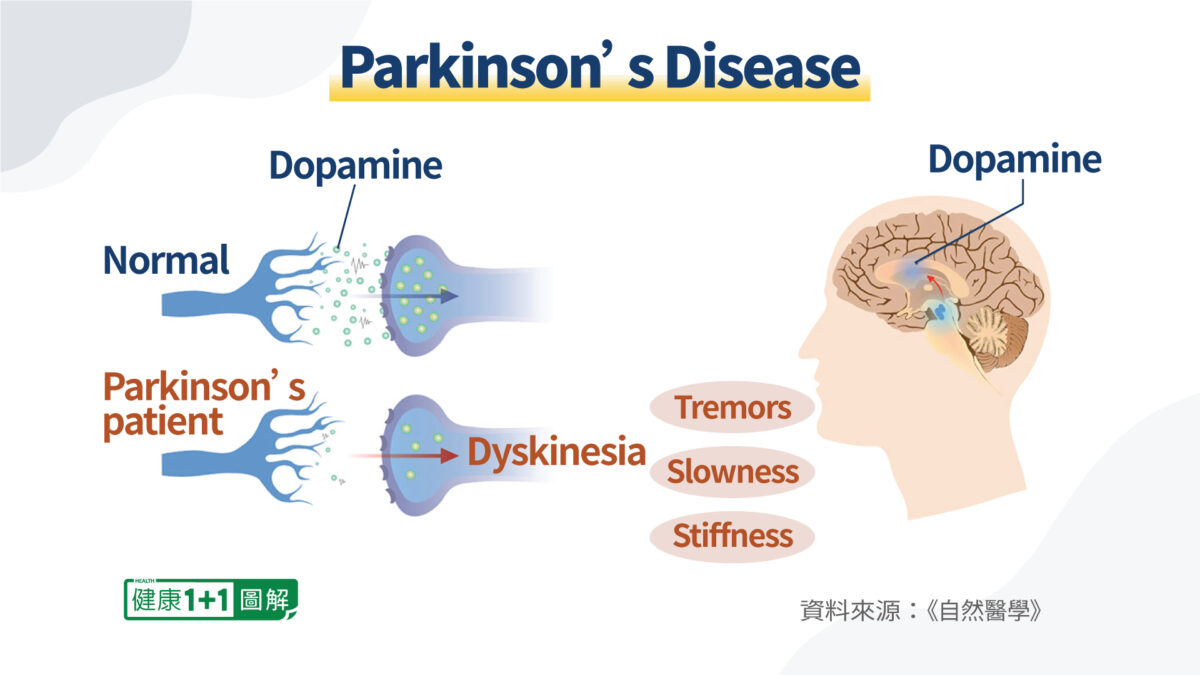 At the Earliest Sign of Parkinson’s Disease, Do This

The well-known actor Michael J. Fox was diagnosed with Parkinson’s disease at the age of 29. At the time, he was one of the most famous celebrities in show business. He gradually developed symptoms such as tremors, stiffness in the limbs and difficulty speaking, and later became a great advocate for awareness and research of this disease. Parkinson’s disease is better treated if detected early, and there is a way to self-test and prevent it.

It is well known that Parkinson’s disease can cause dyskinesia, that is, uncontrolled and involuntary movements like twitches.

In addition, Parkinson’s disease has an even earlier sign.

There is a sleep disorder called the rapid eye movement (REM) sleep behavior disorder. People with this sleep disorder can often punch and kick during sleep, and they often dream of arguing with others, being chased, or facing other stressful situations. Their physical movements in their sleep can even cause injury to themselves or others beside them.

“This is a common occurrence in the elderly, but it may be a precursor to Parkinson’s disease, symptoms which can occur 10 or 15 years before the onset of the disease,” said Dr. Jyh-Haur Lu, a neurologist and director of the Jyh-Haur Lu Neurology Clinic in New York.

Dr. Lu pointed out that only a small percentage of people with olfactory disorders develop Parkinson’s disease, but if a patient also has REM sleep disorder, the chance of developing Parkinson’s disease is as high as 65 percent. So, he does not ignore the problems of smell and sleep during his medical consultation.

People with Parkinson’s disease may also suddenly lose a lot of weight.

According to Dr. Jui-Cheng Chen, director of the Department of Neurology, China Medical University Hospital, although the main symptom of Parkinson’s disease is dyskinesia, it will also affect gastrointestinal motility, resulting in malabsorption. And since some side effects of drugs affect appetite, these patients are prone to sudden weight loss.

Parkinson’s disease is an unexplained lesion in the cerebral basal ganglia, which causes a deficiency of the neurotransmitter dopamine, leading to the following five major symptoms:

1. Tremors in the limbs: The patient has tremors that are regular at rest and may worsen with stress. However, the tremors don’t occur during sleep.

3. Stiffness of the limbs: Their limbs and trunk muscles become stiff.

4. Abnormal posture and unstable gait: The patient’s head, neck, and trunk are all bent forward. They walk in quick and short steps. Some people may walk faster and faster and rush forward involuntarily.

As the symptoms become more severe, activities that the patient used to be able to perform with ease, such as holding a glass of water and getting dressed, become difficult.

Like most diseases, Parkinson’s disease is difficult to treat with medication alone, and the patient’s daily exercise also plays an important role in improving the disease. At the annual symposium of the American Parkinson Disease Association, medical experts recommended two exercises for Parkinson’s patients: walking and Tai Chi.

Walking has been proven to improve the balance of Parkinson’s patients. It may be surprising that ancient Chinese qigong methods are being promoted by the Western medical community. In fact, many studies have shown the positive effects of Tai Chi and qigong on Parkinson’s disease symptoms.

In 2017, researchers from Harvard University published a paper in the medical journal Parkinsonism and Related Disorders. This paper analyzed the effects of 21 previous studies of more than 700 Parkinson’s patients practicing Tai Chi and qigong, showing that Tai Chi and qigong were beneficial in improving patients’ quality of life, motor symptoms, and balance.

In addition, Tai Chi has a squatting stance, which can also train the lower body. Studies have shown that it can help patients’ sense of balance and prevent falls.

Given the obvious benefits of these simple exercises in improving disease symptoms, Dr. Lu advised Parkinson’s patients to “get as much exercise as possible.”

2. Riding a stationary bike can be beneficial

The New England Journal of Medicine has published a special case study about a man with severe Parkinson’s disease who could barely walk. However, when he got on his bicycle, he could perform many activities well with ease, including making turns, moving up and down from the seat, propelling the bike forward and getting off.

Many people with Parkinson’s disease are able to ride bicycles despite the effects of gait impairment. And a 2021 review published in Nature’s research journal npj Parkinson’s Disease compiled 22 studies that showed significant benefits of bicycling in improving motor performance in Parkinson’s disease.

In this review, most of the subjects used recumbent or stationary bicycles, which are easier to ride and less susceptible to balance than regular bicycles.

3. Consuming a lot of probiotic foods to protect the intestinal microbiome

There are 100 trillion normal bacteria in the human intestines, which participate in the body’s metabolism, defend against pathogenic bacteria, and regulate the body’s immune function.

“In the past, when people spoke of neurological diseases, they wouldn’t associate them with intestinal bacteria,” Dr. Lu said. In recent years, many studies have revealed a link between enteric bacteria and brain diseases, including Parkinson’s disease.

Studies with Parkinson’s patients have also found a correlation between the disease and intestinal microbiome. The researchers believe that intestinal bacteria may influence the development of brain disease through a special gut-brain axis feedback mechanism.

According to Dr. Lu, gut bacteria protection has been widely used in functional medicine treatments that emphasize diet and exercise therapy. In neurology, Parkinson’s disease and Alzheimer’s disease are two common neurodegenerative diseases, and appropriate consumption of probiotic-rich foods, such as Korean kimchi, may be beneficial to patients.

Parkinson’s disease is a neurological disease that usually occurs among the elderly, with the average age of onset being approximately 50 to 60 years old.

However, nowadays, the age of the onset of Parkinson’s disease is getting younger. This is mainly due to three factors: irregular work and rest schedules, previous brain injuries, and family health history. According to Dr. Chen, people who have been in car accidents, boxers, and professional sports athletes may develop this after head trauma. People who develop early onset Parkinson’s usually are not genetic cases.

Although Parkinson’s disease is irreversible, a patient’s neurodegeneration is relatively slow, and it usually takes years for the disease to deteriorate to the point of incapacity.

Therefore, it is best to detect and treat the disease early to improve symptoms and slow down the rate of deterioration. If the disease is detected at too late a stage, it will be more difficult to treat.

A simple self-test can be done through finger exercises:

1. Make the “OK” gesture with the right hand. Open and close the index finger and thumb (finger tapping) 25 times.

2. After finishing the right hand exercise, make the “OK” gesture with the left hand. Open and close the index finger and thumb 25 times.

If you experience any of the following abnormalities during the finger exercise, it is recommended for you to see a neurologist for consultation:

Your finger tapping movements slowed down or had a change in speed.
When doing the finger tapping exercise, you paused or were unable to open/separate the fingers.
There were changes in the size of the openings.

What Should Patients Pay Attention to in Parkinson’s Disease Treatment?

There haven’t been any major breakthroughs in the treatment of Parkinson’s disease. At present, levodopa (a dopamine drug) is still the most effective drug.

“In the ELLDOPA study, two groups of Parkinson’s patients received different treatments: one group were given levodopa and the other group weren’t. After five years, the disability index was lower in the levodopa-treated group when compared. The study showed that levodopa has a protective effect on Parkinson’s patients,” said Dr. Lu.

However, there is a “honeymoon” phase in levodopa therapy that makes many patients apprehensive about starting this therapy.

The so-called honeymoon phase of the levodopa treatment refers to the first few years of Parkinson’s disease, when a relatively small dose of the drug is needed to achieve consistent and stable treatment results. However, after several years, the drug becomes much less effective than before, and the dosage needs to be increased. As a result, many people believe that levodopa treatment should be put off until the disease becomes severe, hoping to delay the “honeymoon phase.”

“If a person doesn’t start levodopa treatment after the diagnosis of Parkinson’s disease and waits until the disease is worse after seven or eight years, the medication may not be as effective (because the ‘honeymoon phase’ of treatment was missed), and the dosage still needs to be increased,” Dr. Lu said, “If you don’t use the medication after you get sick, you will let the ‘honeymoon phase’ pass anyway.”