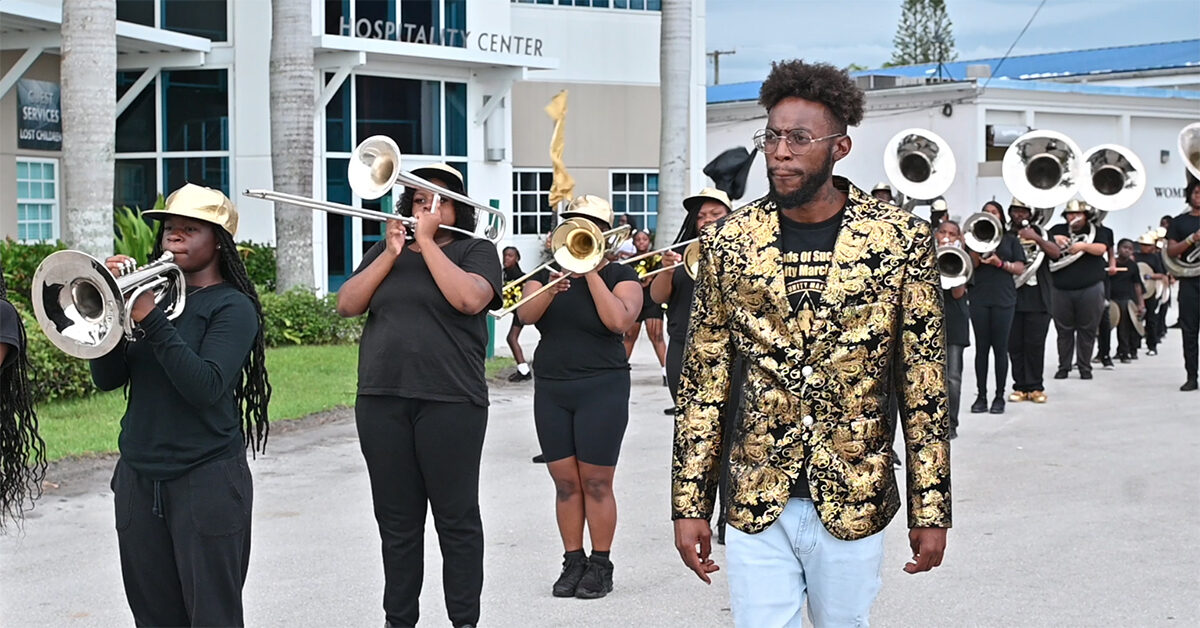 When the Sounds of Success Community Marching Band performs, don’t expect the usual. You won’t hear “Stars and Stripes Forever” or any John Philip Sousa composition for that matter. There won’t even be the high school band staple, “The Girl from Ipanema.”

Instead, the band performs original compositions by its founder and leader, Antoine Miller.

But that’s not all. Sounds of Success members don’t just march; they also dance, with a lot of stepping and stomping. Sometimes, Miller will give an about-face command and the band will march backward while playing.

But the really special part of the package is that the members are all inner-city, at-risk youths from Palm Beach County in Florida.

In 1989, Miller was born in what he described to The Epoch Times as Fort Lauderdale’s “projects” or “the hood.”

“I was a product of my environment,” he said. “Within the neighborhood I was raised in, it was a high drug area, violence was very high, domestic violence was high in a lot of homes.”

Although drugs and gangs were prevalent—and friends of his were casualties of both—Miller never got involved with either.

“I was brought up in the church,” he said, crediting his “strict parents” for keeping him on the right side of the law.

But it wasn’t easy.

“The projects are the ghetto. It’s different than the suburbs,” he said. “You really do have to know how to survive and live within the projects because it’s a lot of things you can get trapped up in.”

Miller escaped those traps through music. Early on, he discovered his gift for drumming and joined the marching band in 6th grade, making drum major in 7th. He also played the saxophone in high school.

At age 18, Miller had some friends who were going to go out one night to stir up trouble. He was hanging out with a girl he knew who encouraged him to not go. He didn’t.

Later that night, his group of friends was arrested.

The following day, Miller ran into his former band director at a fast-food restaurant. He asked Miller what he was up to.

“At that time, I was at a low point of my life, and I was just venting to him,” Miller said.

The band director suggested that Miller come work with his middle school band. Miller showed up the next day and has been working with children and young adults in a marching band atmosphere ever since.

He finds this series of events that played out in a matter of hours very serendipitous and credits it with who he is today.

Miller attended Florida A&M University as a music education major on a partial scholarship for two years. He then became the music director of John F. Kennedy Middle School, which he had attended as a student. Since he was hired as a permanent substitute, he didn’t need a college degree.

This position was followed by another as a dean at the Eagle Arts Academy, a charter school in the area.

By then, Miller was 29 and “extremely bored” with being an administrator.

“I missed the band room,” he said. “That was my love and passion.”

So he came up with a plan for a community marching band, often telling friends and colleagues about his vision, and he also created a business plan in his office during his downtime. He pitched the idea to leaders in the community but wasn’t met with the enthusiasm he had hoped for.

“For every one step that I take, God will take two steps toward me,” became the refrain Miller told himself. He hung fliers at community colleges and promoted his idea on social media.

At first, there were only five adults interested in starting a marching band, and they had no instruments and no band room. The only thing they could do was practice marching at a public park.

But in the four years since its inception, Sounds of Success has a staff of nine volunteers, 120 musicians ranging from 10 to 19 years old (the cut-off age is 23), and a permanent band room at Riviera Beach Preparatory and Achievement Academy.

There’s one volunteer who supervises trumpets and French horns, another for lower brass, and another for woodwinds.

Most of the instruments are donated. Some are used and come from schools that have upgraded their inventory, but some are brand-new and come from individual donors.

One might think that inner-city kids, who regularly see rappers glorified in the media and on the internet, would have no interest in becoming a piccolo player.

Miller credits his unique execution of a marching band to the success of recruiting young musicians.

“You have to be different to stand out,” he said. “My marching band is very energetic. It’s not what we do; it’s how we do it.

The band sometimes wears metallic gold shoes that light up, adding to the spectacle.

The youths that Miller serves don’t travel far from home because of a lack of money. But Sounds of Success regularly travels to other cities in Florida, as well as to cities in Georgia for competitions and parades.

He regularly gets calls from parents who have seen either a live performance or a video and want to enroll their children.

Sounds of Success covers a wide radius of territory, so participants are from many different schools. A Sounds of Success school bus picks each child up after school, takes him or her to a three-hour band practice four days per week, and then drops them off at home when it’s over.

In addition to the band, Sounds of Success has two dance teams called the Sensational Dancers and the Baby Dancers. Sensational is for the older girls and Baby is for kindergarten through fifth grade. There’s a color guard as well.

The teams have three volunteer choreographers, two of whom are Miller’s former students from John F. Kennedy Middle School.

It’s not just about band, dance, and guard. Miller wants these children to succeed in life long after their time with him is over. That means succeeding in school first.

Prior to each practice, all participants have an hour of homework help, usually from college students who need to clock in some intern hours. If the children have no homework, they have to read a book.

If there are older kids who are ready, Miller and his volunteers will set them up with auditions for college scholarships. Currently, there are four former Sounds of Success band members attending college who have received scholarships, with one more audition in the works.

Then there’s the physical workout.

“Band is most definitely a sport,” he said.

“I think it probably takes more physical training to do band than it does to do football or basketball,” Miller said.

So he has the kids run at least four laps before each rehearsal, in addition to pushups and jumping jacks.

Miller does all this in addition to his music teaching job at Palm Beach Maritime Academy.

Miller recently received an email from the event planner at London Band Week, an annual, seven-day celebration of pageantry in London.

“The week creates performance, development, and cultural and community opportunities for its participants,” a spokesman for the festival told The Epoch Times.

The event planner invited Sounds of Success to participate. It’s the only community marching band from the United States that was invited.

He doesn’t want to do that.

“Most of these kids are accustomed to being left behind, and I want to be the one that gives them a sense of hope,” Miller said.

He’s gone on a fundraising bender in hopes of raising the money.

“It’s a trip of a lifetime,” Miller said. “I do believe it’s going to come together.”