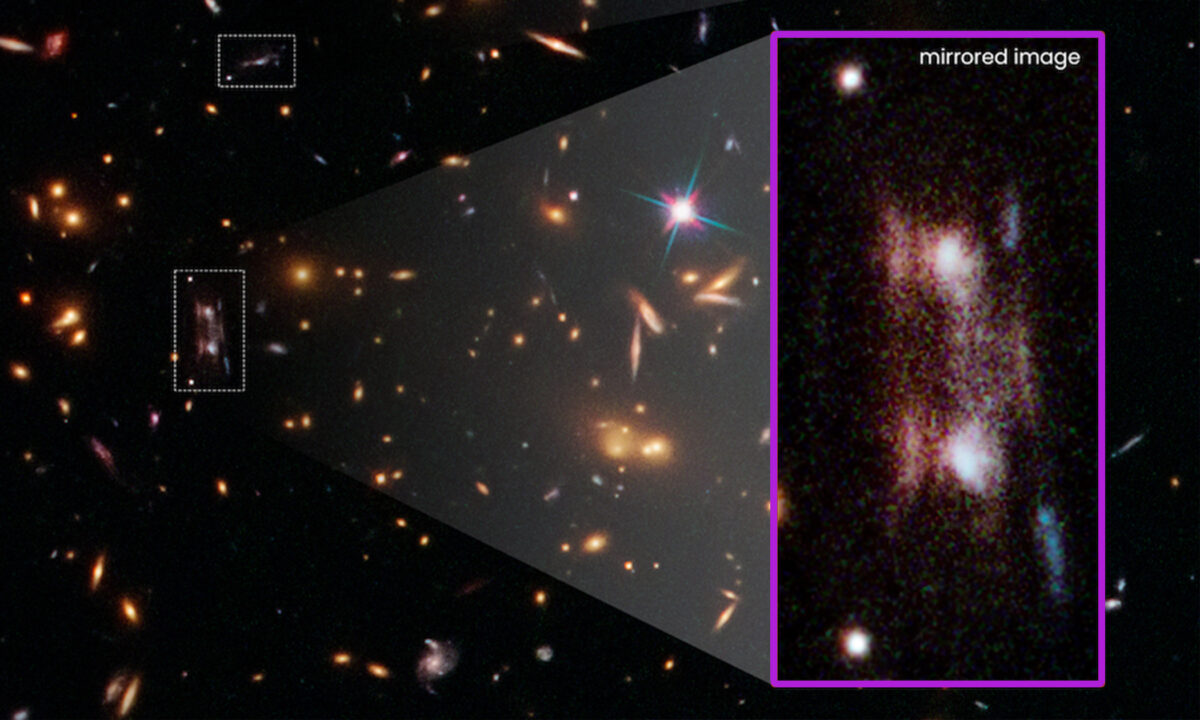 A strange “mirror image” galaxy cluster in deep space, sighted billions of light-years away, was discovered a few years ago and researchers are now starting to wrap their heads around it—and grasping the “carnival funhouse mirrors” of outer space was key in unravelling the mystery.

Gazing into deep space through NASA’s Hubble Space Telescope is a bit like looking into a carnival funhouse mirror. The wavy fabric of space, distorted by the gravity of celestial objects such as far-off galaxy clusters, can have the same effect as a wonky mirror, stretching, magnifying, or even brightening scenes from further reaches—a phenomenon known by astronomers as “gravitational lensing.”

This gravitational lensing allows space researchers to study what is behind the intervening objects causing the lensing distortion itself, while this stretching, magnifying, or brightening acts, in effect, like a kind of natural telescope, enhancing distant objects in greater detail than otherwise would be possible.

A mirror image in deep space?

But a strange phenomenon linked to gravitational lensing was discovered by Hubble Space Telescope researcher Timothy Hamilton in 2013; at the time, he didn’t know what to make of it. While researching quasars (the blazing cores of active galaxies), Hamilton stumbled on what looked like a nearly symmetrical mirror image with pairs of galaxy bulges (central star-filled galaxy hubs) and three distinct streaks on either side, facing each other. The strange symmetrical sighting was dubbed “Hamilton’s Object,” after its discoverer.

Sure, NASA researchers have come across some strange things in outer space, such as colliding galaxies and exploding stars; yet it took years to unravel the mystery of what caused this galactic oddball. “We were really stumped,” Hamilton told NASA. “My first thought was that maybe they were interacting galaxies with tidally stretched-out arms. It didn’t really fit well, but I didn’t know what else to think.”

After chasing dead-end theories and soliciting help from colleagues, Hamilton and a growing team, with Richard Griffiths of the University of Hawaii and Halo assuming the lead, finally solved the puzzle. Griffiths had seen a similar object in a Hubble deep-cluster survey, and in 2015 confirmed that gravitational lensing was the cause; the symmetrical image, they determined, was effected by an intervening galaxy cluster aligning perfectly with more distant background objects. The rare mirroring effect is from background galaxies straddling a ripple in the fabric of space—a dense amount of dark matter (the unseen fabric of space which scientists still don’t fully understand) causing an invisible distortion.

An invisible ripple of dark matter in space.

But the team still had a problem: they couldn’t identify the intervening cluster, what was ultimately causing the lensing effect. Normally, that cluster is the first thing researchers see; the subsequent distortions are observed within that cluster. Then, data from the Sloan Digital Sky Survey located it in the very same spot as those lensed images and it was determined to be a barred spiral galaxy, facing edge-on apparently, more than 7 billion light-years away. The background images themselves were found to be over 11 billion light-years removed.

To gain further insight into the effects of dark matter, Griffiths enlisted expert on gravitational lensing theory Jenny Wagner, of the University of Heidelberg in Germany, who used software to map the dark matter causing the distortion, and concluded that it was “smoothly” distributed in space at small scales.

“It’s great that we only need two mirror images in order to get the scale of how clumpy or not dark matter can be at these positions,” Wagner said. “Here, we don’t use any lens models. We just take the observables of the multiple images and the fact they can be transformed into one another. They can be folded into one another by our method. This already gives us an idea of how smooth the dark matter needs to be at these two positions.”

Discovery of this dark matter-induced gravitational lensing is important, because astronomers still don’t know exactly what dark matter is, even almost a century after its discovery. “We know it’s some form of matter, but we have no idea what the constituent particle is,” said Griffiths. “So we don’t know how it behaves at all. We just know that it has mass and is subject to gravity. The significance of the limits of size on the clumping or smoothness is that it gives us some clues as to what the particle might be. The smaller the dark matter clumps, the more massive the particles must be.”