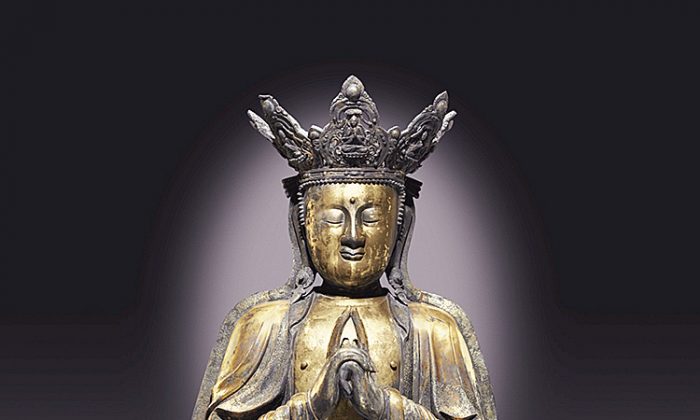 A carved rhinoceros horn cup depicting the eight immortals. From the Qing Dynasty, estimate $180,000 to $250,000. Offered by Sotheby’s. (Courtesy of Sotheby’s)
Arts & Culture

Confucius said: “I am not one who was born in the possession of knowledge; I am one who is fond of antiquity, and earnest in seeking it there.”

Collectors and curators of ancient art from Asia may find similar wisdom inherent in the artifacts created during a time of reverence and devotion to Buddhas and other religious figures.

Asian art provides a glimpse into ancient civilizations, the changes in societies, and the heart of the craftsman. An ancient textile can outline the interactions and influence between neighboring nations. A painted Japanese screen gives insight into the journey Daoist Immortals took on their way to an important banquet. A golden Buddha that once graced the halls of an Emperor will give away some secrets, but not all.

Through the years, admiration for Asian art has also carried political significance for Americans, wrote Warren I. Cohen in his 1992 publication “East Asian art and American culture: a study in international relations.”

“In short, art collecting proved to be a significant form of intercultural relations, an important component of international history,” Cohen said of the period between 1784-1900.

“Americans might appreciate the beauty of Chinese and Japanese art, but they could not easily understand it before they acquired some knowledge of the larger culture of which it was a part.”

During the last half of the 19th century there was evidence of that cognizance occurring, Cohen wrote, when individual Americans and museums began collecting Chinese and Japanese artworks.

Part of New York City’s place in history has been to tolerate and understand new cultures; to break down barriers and preserve what is at risk of being lost or destroyed. To that end, the Asian art market in New York is one of the most important globally.

The city has been an important center for both auction houses and private dealers to be able to bring new material for new collectors, said James Lally of J.J. Lally & Co.

“Some of the early big names—J.P. Morgan, the Rockefeller family, the Fricks, and others—looked to Europe as examples of high living. In manor homes they found beautiful porcelain, some works of art, along with furniture and old master paintings,” he said. “It filled a niche, people were interested, and it grew from that point.”

In this century, geopolitical reasons influenced where, when, and how collectors were able to obtain Chinese art.

Most of the art exhibited in the United States has been coming out of China continuously, Chait said, but “a lot came out in the early 1900s and late 1800s with the collapse of the Chinese empire.”

China’s currency has never been a tradeable commodity—rendering artworks to be a most valued form of currency. When escaping China after communism seized power, many took with them any treasures they could carry.

Following the Great Leap Forward, the Cultural Revolution, and other mass attempts to wipe out traditional culture in China, most Chinese people lost their connection to the value of ancient artifacts.

When the Chinese regime lifted the ban to buy, sell, collect, or trade Chinese art in the late 1980s, people who were very knowledgeable and eager collectors through the 1930s were able to once again become active in the market, said Lally.

“It was a combination of giving freedom to participate to a highly sophisticated group of people who had a long, long tradition of collecting in their past, were suddenly allowed the freedom to collect and were given economic opportunities to give them the ability,” he said.

Today, China itself can still be a difficult place for collectors to navigate, due to the Chinese regime’s political control of art, the laws of the land, and the import-export laws, said Henry Howard-Sneyd, Sotheby’s vice chairman for Asian Art.

“New York offers a marketplace that is markedly different than in China,” he said. “In New York, the collectors know they will be well-received.”

The New York marketplace today is changing, with the surge of buyers from the Chinese.

“American and European buyers remain very important actors in the art market and sometimes are more dominant in different segments of the market,” said Lally.