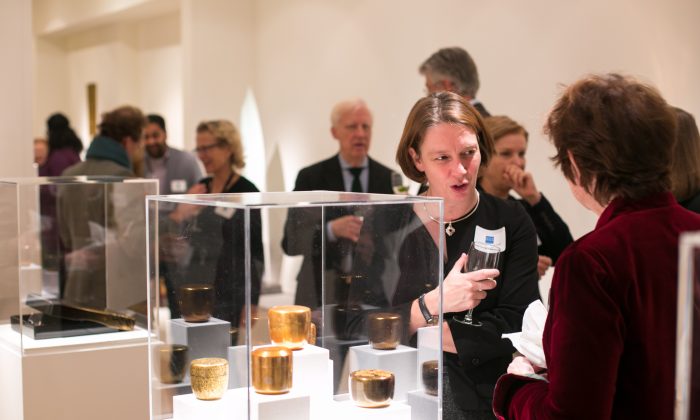 Featuring ancient as well as contemporary Chinese, Japanese, Korean, Indian, Himalayan, and Southeast Asian art, it is the largest and most diverse roster of international galleries the Asia Week New York Association has partnered with so far. A record-breaking 13 new galleries have joined for 2017.

“Rarely do we ever get an opportunity to see such fantastic works of art offered by such premier dealers and institutions and our great cultural partner The Met, in one location, here in New York City,” said Lark Mason, chairman of Asia Week New York at a press reception at the Erik Thomsen Gallery on Dec. 8. “The ongoing participation by notable galleries is a testament to how firmly entrenched this annual event has become.”

Among the international galleries, The Metropolitan Museum is the largest institution participating, with its 54 galleries dedicated to Asian art. During Asia Week, The Met will feature six exhibitions on loan from the Korean National Museum; the third installment of Mary Griggs Burke’s collection of Japanese art; an exhibition titled “Show and Tell: Stories in Chinese Painting” from the 12th century to the present; and an exhibition of theatrical costumes, used for the entertainment of Qing dynasty emperors.

The Met’s Tibetan and Nepalese galleries will also display some recent acquisitions. The retrospective exhibition devoted to the contemporary Indian female painter, dancer, and musician Y. G. Srimati will continue to be on view during Asia Week.

Despite the impressive list, Mike Hearn, the curator of Asian art at The Met, said: “We may be the most comprehensive collection of Asian art in the world, but we are not complete and we are not the finest. We have a lot to work for to be world class.” It was a reminder of the vast breadth and depth of Asian art and culture.

“I feel like it is very important for an institution like The Met to represent Asia at the same level of quality, with the same kind of comprehensive treatment, that we expect for Western arts,” Hearn said at the press reception.

In the new year, Asia Week New York will also continue to offer a nonstop schedule of gallery open houses, exhibitions, lectures, symposia, special events, and auctions at houses including Bonhams, Christie’s, Doyle, iGavel, and Sotheby’s. Also, for the fourth consecutive year, The Met will celebrate the week’s festivities by co-hosting a private, invitation-only reception on March 13.

A comprehensive guide with maps will be available at participating galleries, auction houses, and cultural institutions, starting February 2017 and online at AsiaWeekNY.com. Emphasizing the strength of interest from Chinese-speaking buyers, a Chinese version of the website is available at cn.AsiaWeekNY.com.