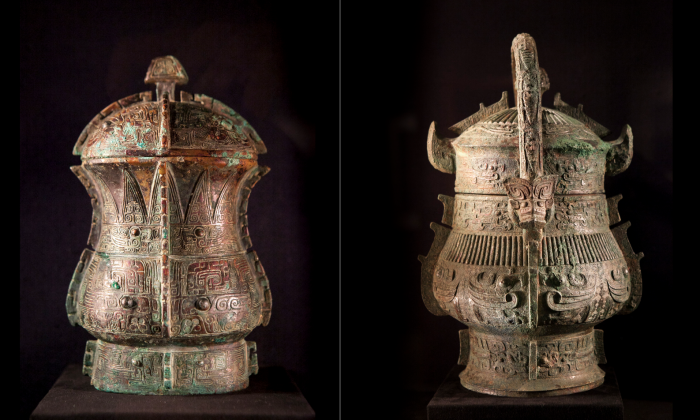 NEW YORK—Asia Week New York broke its own participation record this year with 47 exhibiting galleries—most of them returning, but a handful first-timers.

One of the standout newcomers is Gisèle Croës from Belgium, presenting ancient Chinese bronzes, pottery, sculpture, and metal artifacts. Everything in Croës’s exhibition on the spacious fifth floor of Gagosian Gallery was on a grand scale, beginning with a nine-foot tall bronze temple guardian—imposing, alert, but benevolent—from the 15th century.

Moke Mokotoff, New York-based dealer of Central Asian and Himalayan art, is also new to the roster this year, but his collection of Buddhist sculptures and textiles feels like it has always belonged with Asia Week.

Returning exhibitors for the most part gave Asia Week attendees the antiques and antiquities they’d expect.

Kang Collection Korean Art, though, did a 180 from last year. Instead of Korean scholarly and literati paintings that dominated last year’s exhibit, Kang Collection chose to exclusively focus on the work of Ik Joong Kang, a contemporary mixed-media artist from Korea. The gallery was filled with oversized, liquid-plastic covered paintings on wood, and tiny porcelain jars.

Though few exhibitors were so singular in their subject, several opted to curate their diverse collections around a theme.

Eric Zetterquist and Joan B. Mirviss are both presenting monochromes; Zetterquist pre-Qing Chinese ceramics and Mirviss contemporary Japanese ones.

Zetterquist dispensed with color to focus solely on the shapes of Chinese ceramics, especially Song and Yuan pieces.

“If an object has a good form, a line will extend beyond itself into space and engage a viewer’s imagination,” Zetterquist said, demonstrating his point on a 4,000 year old black water jug from the neolithic Chinese culture Longshan.

Whether you’re a collector or not, Asia Week and other Asian art-related events taking place around the city this March are great opportunities to learn about the vast and varied traditions of Asia.