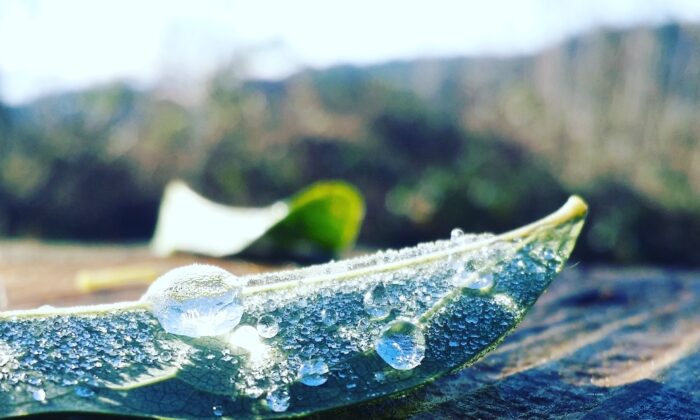 As the temperature drops, dew lingers and begins to frost, giving this solar term its name. (Cory Gomez/Shutterstock)
Mind & Body

It might sound confusing that there was a White Dew in early September. What’s the difference between White Dew and Cold Dew? White dew is the reflection of the increasing moisture in the air and looks misty while the temperature is not yet so cold; and cold dew refers to when the temperature has dropped dramatically so it stays in water droplet form, or even becomes frost in the northern part of the world.

The idea behind it is based on an ancient understanding of numerology. The number nine is, of course, the largest number between zero to nine; after nine, it goes back to zero, so it’s a risky moment and a time to review with humility. Also, according to the ancient Chinese prophetic Book of Changes, odd numbers belong to yang, while even numbers belong to yin. Thus, nine is the biggest number in yang, and double nine makes the power even stronger.

On the ninth day of the ninth month in the traditional Chinese calendar, ancient Chinese believed it was easy to attract bad things. Going hiking in the mountains and avoiding crowds was not just to avoid disease, but to show respect to heaven and to review one’s behaviors. October is also normally a peak season for flu and pandemics.

This year the Double Ninth Festival comes a little bit later than normal, falling on Oct 25. But still, due to COVID-19 this year, we’d be wise to be careful and protect ourselves well.

Traditionally, ancient Chinese people used water from deep wells to make wine and medicinal pills with seasonal herbs on the date of the Double Ninth Festival.

Living in Harmony With ‘Cold Dew’

Although we have to be careful with the flu and similar types of infections, we still want to enjoy some nice activities that can achieve the desired results. Here are some tips:

Drink lukewarm or room temperature water. It is particularly important to maintain good circulation and hydration, to keep the immune system functioning well. Then, if a virus or bacterial infection hits, the body can eliminate it efficiently.

One should also cover the neck and chest to protect them from temperature changes.

If we get caught by rain at this time of year, we can use a hairdryer to dry the area. This trick also can work for those having respiratory or circulation problems; point the hairdryer at the center of the chest to warm it.

Epoch Times contributor Moreen Liao is a descendant of four generations of traditional Chinese medicine doctors. She is also a certified aromatherapist, former dean of the New Directions Institute of Natural Therapies in Sydney, and the founder of Ausganica, a certified organic cosmetic brand. Visit LiaoMoreen.com