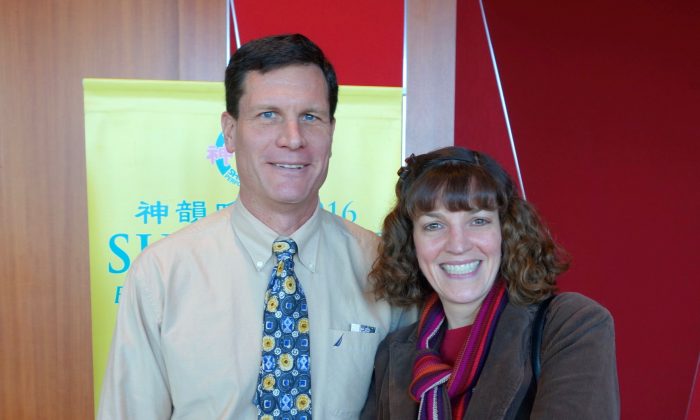 ATLANTA—A handsome couple took a selfie in front of a Shen Yun Performing Arts banner. They enjoy the arts and understand them well, and saw Shen Yun for the first time on Jan. 17. They had fun, and they had a deeper response as well. “I loved it. It’s fantastic. We loved it,” said Julie Lindell. “We have a son who danced forever. We know a little bit about professional dancers from being in it.” She laughed and said she studied dance, too, but was only good at tap, because “I’m not bendy.”

Her husband Chris Lindell is a retired pilot and Air Force officer, who now is a systems engineer at Lockheed Martin, which is very near Cobb Energy Centre. Lockheed is a major aerospace, defense, information technology, and emerging technology company.

Some of the people he meets professionally tend to demonize China, according to Mr. Lindell. But he was glad the artists of Shen Yun show “the overall good” that is at the heart of traditional Chinese culture. “You’ve got to be respectful.”

According to the program, “China’s ancient civilization was, in fact, deeply spiritual. Traditional Chinese culture is based on the idea of harmony among heaven, earth, and humankind.” But the Chinese Communist Party has almost completely destroyed authentic Chinese culture.

Mr. Lindell said it was interesting that “they’re trying to tell a Chinese story that’s not accepted in China, they’re Chinese people doing it.”

Mrs. Lindell, speaking of cultural beliefs, customs, and traditions, said, “How can you take that away? It’s not really religious—it is but it’s beyond that. I don’t understand arguing about religions. There’s a spirituality underneath all of it, anyway. Tolerance. We need more of it. I liked the message.”

Both Mr. and Mrs. Lindell did graduate studies in political science. It was the military that brought them to Atlanta, according to Mrs. Lindell. And it was their son’s dance and music studies that deepened their interest in performing arts. They were drawn to Shen Yun by the precision in its promotional videos, she said.

The artistry’s fantastic, the costumes were fantastic.
— Julie Lindell

“I like the artistry of it. The artistry’s fantastic, the costumes were fantastic. I liked all of it, really. I liked the precision of it. I knew going in, seeing the little videos they run of it, I would go just for that. Because you don’t always get dancers this precise.”

They often go see dance, but have recently been disappointed when a dance performance has no orchestra. Mr. Lindell said, “Of course every now and then we see a really good performance and we’re let down because it’s piped-in music.”

Turning to his wife, Mr. Lindell said, “You seemed to really like the under the sea one, the fairies, the first one under the second act [Fairies of the Sea].

She smiled and said, “The one with the fans that looked like water. I’ve never seen anything like that. They had some neat tools to play with. Oh, and the men, when they had the fans with the click sound, snap, the snap, it was like an instrument almost. [“Poets of the Orchid Pavilion”] I didn’t know it was new every year. The artistry’s amazing.”