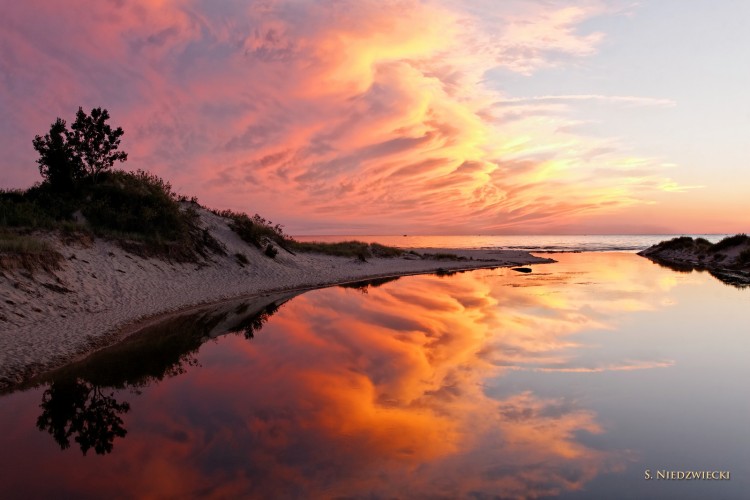 “Edge of Isaac,” Stacy Niedzwiecki’s entry into ArtPrize, pictures a Michigan shoreline with the water reflecting the edge Hurricane Isaac being swept into the distance. (Courtesy of Stacy Niedzwiecki)
Arts & Culture

With over 1,500 entries ranging from two-dimensional, three-dimensional, multimedia, and performance art, seen in 161 venues, including museums, restaurants, hotels, churches, and a variety of businesses around Grand Rapids, the nearly three-week-long competition is unique.

Now in its fourth year, ArtPrize, a social experiment, gives away over half a million dollars in prizes, the most cash awarded in any art competition around the world. Artists from 45 states and 56 foreign countries have entered this year. A 2011 study by Experience Grand Rapids noted the ArtPrize event generated more than $15.5 million in economic activity during its 19 days.

In this competition, ArtPrize organizers do not choose artists. Any space within the designated ArtPrize district can serve as a venue, and venues handpick the artists they wish to showcase in their space after receiving artists’ applications.

“The ArtPrize platform creates a system that values creativity, experimentation, and above all, collaboration,” said Catherine Creamer, executive director of ArtPrize. “Artists are encouraged to build a relationship and partner with a venue as early as possible to create a memorable and successful installation.”

Fine art nature photographer Stacy Niedzwiecki from Michigan did just that. She received word from another artist about a wonderful venue for showcasing art, so she sent a letter to Jane Lovett, owner of Peaches Bed and Breakfast, stating her interest in having the bed-and-breakfast, a Georgian manor in the Heritage Hill District of Grand Rapids, host her entry. Lovett selected her as one of Peaches Bed and Breakfast’s 24 entries.

“I want art that’s beautiful,” said Lovett. “I can do a pile of gravel in a wheel barrow. I don’t think that’s art. I happen to like art that’s beautiful. I have actually seen Stacy’s work. She’s fairly known in Grand Rapids. We’ve never had a photographer here before, but I chose it this year because I really like her photography.”

Niedzwiecki, who places emphasis on proper exposures and correct post-processing techniques for the purpose of upholding the integrity of the work, had wrapped up an afternoon of portrait photography at a Michigan beach when she captured her showcase image, “Edge of Isaac.”

She was in the right place at the right time to witness the stunning cloud formations, remnants of Hurricane Isaac, drift on by as the sky colorfully transitioned with the setting sun. The gently curving shoreline and serene water serving as a mirror for the sky create a powerful scene.

One aspect of photography that took Stacy by surprise was the profound effect her work has had on others. A collection of her nature images is a permanent part of the art collection at Lemmen-Holton Cancer Pavilion in Grand Rapids.

For cancer patients, the peaceful nature scenes are sometimes the only connection they have to the outside world, and sometimes the patients, overwrought with emotion, express their appreciation of Stacy’s artwork in person. She gladly stepped up into a new role, one with more empathy.

“I take that responsibility rather seriously,” Stacy said. “I have to take time to listen to people, and I’ve had to take time to care and involve myself in people’s lives in a way that I could never [have] imagined.”

In addition to the top award of $200,000 decided by public vote, new this year is the $100,000 Grand Juried Prize selected by a panel of three judges.

With a total of $360,000 awarded by public vote, and $200,000 in awards by art experts’ votes, an interesting tension is created—will the juried awards and public choices show a wide difference in art preference, or will the two cross paths to award a single artist?

All winners will be announced on Oct. 5.