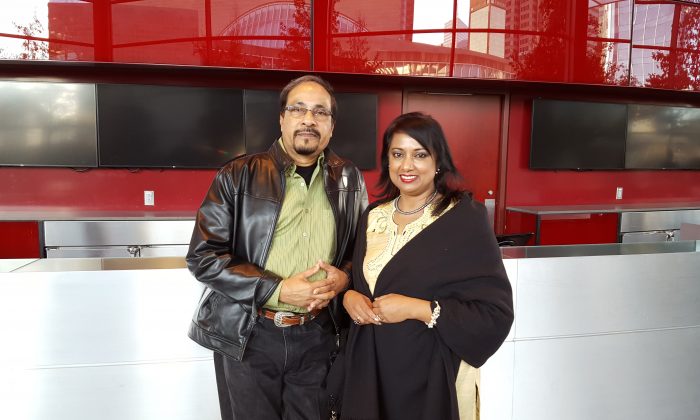 DALLAS—Classically trained in Indian music, Niala Islam had a wonderful time discerning the different instruments, arrangements, and composition in the music of Shen Yun Performing Arts.

“I could relate to it,” she said. Ms. Islam attended the performance with businessman Khan Anis at the Winspear Opera House on Jan. 3. It was the fourth full house performance in Dallas since the season began.

“It’s very serene, it puts you in a peaceful state of mind,” she said.

Ms. Islam was particularly excited to see the solo erhu performance, comparing and contrasting the music with her own memories and training.

“That was really cool!” she said with a clap, launching into an explanation.

Indian music has “raga,” she explained, a systematic way of improvising, which includes patterns, characteristic intervals, and rhythms unique to classical Indian music.

The erhu piece, too, had a unique structure to it that impressed Ms. Islam. She said it might look like improvisation or even random notes that come together to create the well-blended tunes, but there is really a structure to it all.

The erhu is a nearly 4,000-year-old instrument with two strings, sometimes called the Chinese violin. It is capable of producing a wide range of sound. In fact, the instrument is known for its expressiveness, and can even mimic human vocal chords.

New York-based Shen Yun aims to revive authentic, traditional Chinese culture through the performing arts. The productions each year include classical Chinese dance, folk and ethnic dances, and an orchestra with ancient Chinese instruments like the erhu. Many of the dances are story-based, and cover many different dynasties, classics, myths, and even modern history.

Khan Anis, who attended the performance with Ms. Islam, acts with a local theater group and so enjoyed seeing stories told through dance.

With a big smile and excited gestures, he gave a play by play of story of the child emperor Kangxi who almost lost his throne before his reign began, his plan of defense, and the victorious result. And all this with no dialogue.

Any layman can understand the story because the body language is [so] designed.
— Khan Anis

“Any layman can understand the story because the body language is [so] designed,” Mr. Anis said. He described how the Shen Yun performers used facial expressions and movements, and a surprising and amazing backdrop, to create this effect.

Classical Chinese dance, the foundation of Shen Yun’s performances, is incredibly expressive as the company’s website explains. In addition to the basic dance training and additional difficult tumbling techniques, the form emphasizes bearing, a technique for expressing inner feelings through form.

As a Shen Yun article explains, the “acting” in classical Chinese dance “involves coordinating facial expression with physical movement, which, when merged together, results in an amplified form of expression.”

As one Shen Yun dancer told the Epoch Times, even sea fairies have different bearings from celestial fairies.

“They are professionals, that’s the first thing I thought,” Mr. Anis said.

Also in the audience was Kim Eden, a professional photographer, with her daughter Morgan Eden, who is studying ballet.

Morgan was impressed with the grace and beauty of the dancers, and Ms. Eden spoke of how well Shen Yun integrated the various aspects of the production.

Ms. Eden described the effect when the curtains rose: fog filled the stage, and a colorful scene was unveiled. That was a “wow” moment for her, along with the spirituality of the culture shown through the dances and unique instrumentation.

“The visuals were wonderful. The colorful costumes, and the movements, and the way everything moves simultaneously and gracefully,” Ms. Eden said.