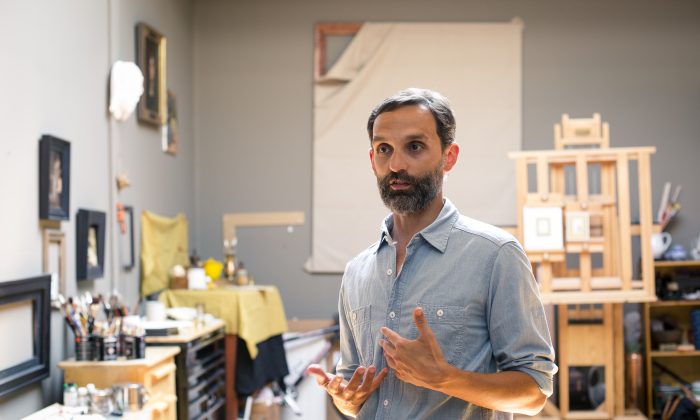 Artist Tony Curanaj talks about his work and art, in his studio in upstate, New York, on July 28, 2016. (Samira Bouaou/Epoch Times)
Arts & Culture

NEW YORK—No doubt Tony Curanaj will surprise you. Regardless of his intensity, he’s not a hit-you-over-the-head kind of artist. He communicates through his astoundingly realistic paintings with incredible subtlety and refinement. Yet he will tell you he paints like a child.

“Children try to draw realistically. They just haven’t developed the motor skills or the ability to be able to do it accurately yet, but their attempt is to represent faithfully what they know,” he said in his studio in Westchester, New York.

Like a curious child, bursting with creativity, Curanaj represents what he sees honestly and with relentless determination. The more he seeks an honest portrayal, the more present he is with the subject he’s painting. The more aware he becomes, the more he sees, and the better he can translate his experience onto the canvas.

What once seemed unattainable becomes attainable. One tiny brushstroke after another, the level of virtuosity goes up a notch.

“It’s not because I’m trying to paint to wow people with accuracy; it’s the process that makes me paint that tight,” he said. While he does some trompe l’oeil paintings, he does not necessarily consider himself a trompe l’oeil artist. He’s not purposely trying to create optical illusions. Generally, the fine finish of his paintings is a result of the refinement of his awareness.

“It’s a never-ending search forward, you can’t go backward, you know too much,” he said. “Drawing or painting like a child is to try to execute the best you can. I think that’s actually very important.”

So many of the things that we interact with and use are made to be disposable, adversely affecting our mindset and our environment. “I’m trying to be the anti–all-of-that,” Curanaj said. “I want to do things that are beautiful, and that will stand the test of time.” Half jokingly he called it his “punk rock rebellion,” an attitude that harks back to his youth.

“I was a punk rock skateboarder kid. I did graffiti; I still do occasionally,” he said. His graffiti tag, Sub, has been sighted all over. While spray-painting walls in the United States, Europe, and South America, he would also go to museums and admire the old masters. Later he designed and illustrated for Disney and MTV, and was featured in George Lucas’s book, “Star Wars Art: Visions,” but he always wanted to be a realist artist.

“When I was in college, art teachers were saying, ‘You should be throwing paint on the canvas.’ I thought, ‘That’s not cool, there’s nothing cool about that,'” he said.

In an ironic twist in the development of the contemporary art scene, the realist artists have become, in a sense, the most rebellious. Facing an art world in which a monochrome painting only takes a few hours to complete, Curanaj will instead spend weeks, months, or years painting something from life.

“I understand why, for example, a monochrome painting would be in a museum for cultural significance. There are even things that I think, ‘Oh, that’s not bad, that’s kind of cool.’ Then when you find out it was bought for $10 million, that’s not cool anymore. When you add the price tags to these things, it becomes obscene or wrong,” he said.

Years ago, he played a practical joke to make a point to a friend: He talked about a fire alarm in a contemporary art museum as if it was a work of art. He and his friend walked away, and then turned around to see a couple of people walk up to the fire alarm to see it up close.

“I don’t see the cultural importance of a lot of contemporary art that focuses on de-skilling. If anything I see it degrades society. … It’s really sad,” he said.

Raising the Tide for All Ships

It’s not the idea of being rebellious or different that drives Curanaj; he’s simply driven by wanting to be authentic. If contemporary realism would become part of the mainstream art scene, he would still be painting in the same way he does today.

He wishes for that to happen “because of the idea that the high tide raises all ships,” he said. “When I see my colleagues getting really good, that is inspiring to me because it means that we all have to get good to be able to stand out, and I want to be in a world where everything is done beautifully.”

If you would compare Curanaj and his colleagues to athletes, they would be qualified to compete in the Olympics, and could even be gold medal winners. But in the current mainstream contemporary art scene, they are marginally considered for ranking.

To change that tide, Curanaj and his friend and colleague Edward Minoff host the podcast “Suggested Donation.” They interview artists of all mediums—artisans, craftsmen, curators, and restorers—who value skill in the arts.

Curanaj calls himself a lifer, in the sense that he has been devoting his whole life to art in the best sense of the word. A lifer is also the term for a species of bird that has yet to be seen and that will be added to the bird watcher’s life list. We could also think of Curanaj as an artist whose work is currently mostly hidden from the public and waiting to be more fully seen.

Birds appear in several of his paintings. Three birds, including a dodo bird, appear in his largest painting to date, titled “Oblivion,” spanning a mega 8 feet by 6 feet. It was a milestone for him.

The perspective is set up in such a way that you would feel like you could walk straight into the painting. Minoff, who is one of the few who saw “Oblivion” before it was shipped to a collector, said in Episode 13 of “Suggested Donation” that when he stood in front of the painting, he felt an incredible sense of wonder.

“Every corner of that surface was believable space that you as a viewer were entering into. There’s no place to hide in a painting like that. I thought it was such an amazing accomplishment,” Minoff said.

“I saw an extinction, not in my lifetime but in the lifetime of [creating] a painting,” Curanaj said. “I saw something that was very profound, that should be very important to all of us.”

That experience, and several other epiphanies he had while creating that painting, confirmed for him that he’s on the right track.

Curanaj plans to borrow “Oblivion,” now with its owner in Portland, Oregon, to show it to the public sometime in the near future.

In the meantime, a big half-stretched linen canvas hangs in Curanaj’s studio. He has a whole arsenal of ideas he wants to put to canvas and is planning to create a whole series of paintings, to be displayed for the public before they will probably get whisked away by private collectors.