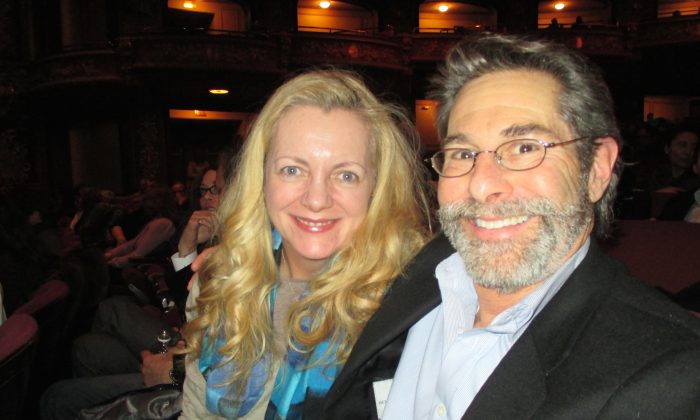 Debbie Elovitz and her husband, Bill Elovitz, at the Citi Wang Theatre in Boston, Mass., on Feb. 28, 2014. (Catherine Yang/Epoch Times)

BOSTON—Artist Debbie Elovitz and her husband Bill Elovitz, president of a retail chain, have long been lovers of Chinese culture. So for Mr. Elovitz’s 61st birthday, they decided seeing Shen Yun Performing Arts at the Citi Wang Theatre would make for the perfect outing.

From the moment the curtains opened and the fog depicting celestial clouds spilled out, the performance was beautiful for Mr. Elovitz. “It brings back nice memories” of a China he knew from trips there many years ago, he said at the theater on Feb. 28.

New York-based Shen Yun revives 5,000 years of Chinese civilization, said to be inspired by the heavens, through the universal languages of music and dance.

Mrs. Elovitz said watching Shen Yun brought forth playful and cheerful feelings, and a sense of being content. The colorfulness of the costuming and set and the performers had made it so.

The couple also noted how impressed they were with Shen Yun’s digital backdrop, which allowed dancers to appear on stage one moment and on screen the next. The effect came through in particular in many of the mini-dramas performed by Shen Yun, telling stories from ancient legends to those of modern-day China.

“It ties it all together nicely,” Mr. Elovitz said of the narratives.

“It’s like an affirmation of life,” Ms. Sullivan said. “The dancing is just amazing.”