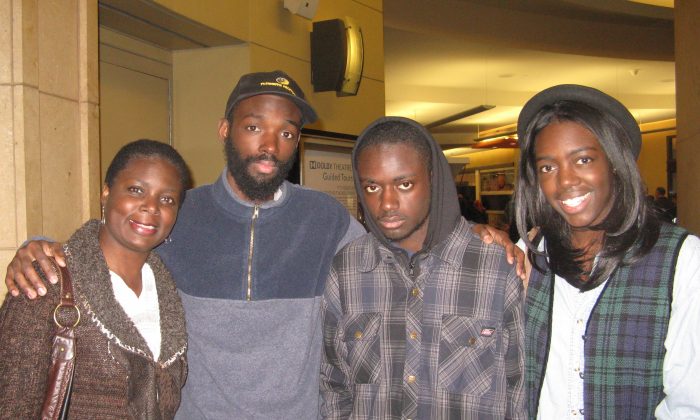 HOLLYWOOD, Calif.—”This [Shen Yun] was something more than just an entertainment, but something that would jog the mind of the human and take them out of the setting that they’re in and bring them to actually think about something other than themselves,” said Chris Moran, an artist and minister, commenting on the profundity of Shen Yun. “Actually something bigger than themselves, in seeking the truth.”

Mr. Moran came with mother, Michelle, and siblings Hailey and Caleb, to the Jan. 22 evening performance of the Shen Yun Performing Arts World Company at the Dolby Theatre.

Shen Yun’s mission is to revive China’s 5,000 years of culture—thought to be divinely imparted—by using classical Chinese dance and music to bring to life the stories that make up the culture.

Chris saw in Shen Yun an effort of Chinese people to return to their roots. “I think what is going on among some of the educated Chinese people is an effort to get back into tradition. I saw that in this,” he said.

He also saw in Shen Yun not just a return to traditions, but something that could bring about change across the world.

“Change usually starts with artists and people on the ground because art is something that’s so human. It speaks to the soul,” he said. “So if this speaking of truth and trying to come back to traditionalism starts with the artist, then change then starts. Because it starts with the people.”

Without the dance and music and brilliant costumes, Shen Yun wouldn’t be able to convey China’s profound cultural heritage.

Michelle, who owns a small business, was taken by the costumes.

The colors, in particular, struck her. “They’re brilliant. I think the U.S. could be more colorful. We seem kind of dull compared to that culture.”

Hailey, who is an actress, was impressed with the combination of dance and music.

“It was wonderful,” she said. “It was great to hear the music along with the dance.”

Backing up each dance piece is the Shen Yun Orchestra, playing original pieces using instruments from both East and West.

Caleb, a musician, also enjoyed the performance, and commented specifically on the orchestra.

Also supporting each dance is a digital backdrop, which the Shen Yun website explains: “With state-of-the-art graphics technology, Shen Yun’s digital-backdrop team creates vividly animated settings, extending the stage and transporting the audience to a world where heaven and earth are one.”

Hailey, thinking of her experience in the theater, commented on the backdrops. “I was really taken aback by the scenic design,” she said. “The use of the big screen in the back was just genius. And it flowed fluently and I was really impressed.”

But it was more than just the dance and music and scene design that she appreciated. “The cultural experience,” she said. “I think it was phenomenal.”

Chris agreed. “I would describe it as an experience—not necessarily as a novelty—as much as it’s a cultural experience, something that would draw them in and you would participate in,” he said, on how he would describe the show to others. “Something you have to use your mind to enjoy.”