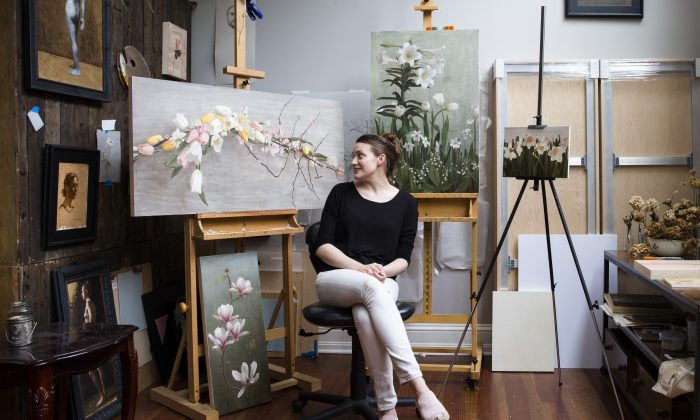 SOUTHAMPTON, N.Y.—You cannot help but feel instantaneous joy when you first set eyes on Katie G. Whipple’s flower paintings. When you look longer, a plethora of meaning unfolds from every flower she has painted. They look triumphant in their beauty and grace. Even the ones with fallen petals engender a sense of wonder and surrender, reminding us of our vulnerability when faced with adversity or the fleeting nature of life.

“I paint one flower a day,” Whipple said in her summer studio in Southampton on Long Island, N.Y., which she shares with her husband, artist Brendan Johnston. She sat in front of a large painting of an arching quince branch, partially in bloom, with tulips and daffodils elegantly attached to it.

She had recently finished and signed the last painting to be shipped to California for the exhibition “Three Under Thirty,” featuring two other young artists, at Arcadia Contemporary gallery.

“Even though I’m pretty young, I’ve been painting for a long time—over 20 years!” she said laughing. She started painting at age 4 with her mother.

Now at 26, after completing rigorous academic training at Grand Central Atelier (GCA), Whipple can paint anything she would want to represent with admirable skill. Over this past year, she has chosen to paint flowers—or maybe flowers have chosen her, perhaps knowing she would elevate them beyond their expected decorative function.

Growing in the Garden

Whipple’s career has developed on a steady upward trajectory. Before finishing her studies, she started teaching at GCA and won awards along the way, including the Alma Schapiro Prize, which sent her to Rome to study works of the old masters. It was in the gardens of the American Academy in Rome where she started to make botanical paintings of grape vines, flowers, vegetables, and lemon, orange, persimmon, and apple trees.

Upon returning to the United States, she was commissioned by the C.S. Lewis Institute in Ohio to paint the “Annunciation,” a triptych showing the moment depicted in the Bible when the angel Gabriel announces to the Virgin Mary that she will give birth to Jesus. The painting has lemon trees in the background and many floral elements. As she painted the figures of Gabriel and Mary, she longed to go back to painting the flowers in the background.

In that painting, a lemon branch at the level of Gabriel’s mouth reaches across from the left panel to Mary on the right panel. “That was my representation for the word,” Whipple said. Yet it was as if an angel of flowers was whispering in her own ear, telling her that she would give birth to many floral paintings. “That realization was so shocking to me, because I always thought I would be a portrait painter,” she said.

The day after dropping off the “Annunciation” in Ohio, “I was like, ‘OK, let’s get back to work.’ No breaks, no post-project depression,” she said laughing. That was about a year and a half ago. “I just haven’t stopped painting flowers since,” she said.

The floral arrangements Whipple paints can only exist as paintings. Unlike other painters who set up a bouquet in a vase and paint from life until the flowers whither away, Whipple sets up one flower at a time. She designs her floral arrangement as she paints.

She came up with her own method that allows her to dedicate a whole day’s work to each flower, expressing the difference of each in more detail, she said. Like the impossible bouquets the Dutch Golden Age masters painted, Whipple paints flowers that we would never be able to see blooming together at the same time in nature.

“I love how you can make things that can only exist in a painting, and especially with things like flowers, which are very transient,” she said.

Sometimes she has to be inventive in troubleshooting. She uses tape and string to hold each flower in place, especially for tulips because they move a lot and continue to grow after being cut.

Looking at the painting behind her, she said, “I also had strings holding the necks in place and used tape. So my setups look crazy.” It was like she had just revealed the secret to a magic trick.

For Whipple, the idea that beauty is in the eye of the beholder holds true only to a certain extent. “Obviously, everyone has different taste, but there is a universality to the things we can all agree on that are beautiful. Everyone stops in their tracks when they see the Winged Victory statue in the Louvre, no matter what culture they are from. We can all appreciate really beautiful, well-made things. There’s a universal language,” she said. Flowers are a more obvious example of what is universally considered beautiful.

Just as flowers have inspired countless lines of poetry, Whipple can easily perceive the endless potential in painting them. “There’s something about flowers. I think we need them. I need them,” she said. “They crack me up, too, especially daffodils. They have so much personality.”

Her face lit up as she remembered her favorite quote from Victor Hugo’s “Les Misérables,” “‘The beautiful is as useful as the useful—perhaps more so,'” she said.

Painting flowers became more useful than she could have anticipated. Whipple’s transition from her studies to establishing her career developed rather seamlessly. Yet she experienced a setback during her fourth and last year of study at GCA. At 22, she fell sick, and her doctor diagnosed her with a combination of depression and anxiety that had manifested physically.

Since she has been painting flowers, she has no longer been suffering from those symptoms to such a debilitating extent. She no longer needs any medication. “I mean, how can you look at a pink daffodil and not be happy? It’s like, ‘come on!'” she said laughing. “I don’t have any trouble going into the studio and getting to work, and I really did before for a while.” She’s absolutely certain that painting flowers helped her heal from depression and anxiety.

“We have always cultivated flowers,” she said. In a sense, it is as if the flowers are helping her cultivate herself and her artistry. Painting them brings out the best in her. All the joy she feels when she paints is infused in her paintings, and when one looks at them, one feels that joy readily.

Although the work of Dutch Golden Age floral painters, as well as French artist Henri Fantin-Latour, is highly regarded, paintings of flowers are not generally considered as seriously as other types of paintings, such as figure paintings or landscapes. Perhaps it’s because flowers are so beautiful that they can easily become cliché, so it is even more difficult for a floral painting to be considered a masterpiece.

“I decided I’m just going to paint flowers with the most integrity that I can and be as true to myself as I can,” she said. If she started painting something else, like figure paintings for instance, assuming that they are perceived to be more important, Whipple says, those paintings would probably look terrible because she would be unhappy.

Looking at her painting of white lilies, she said, “I think of these as portraits. Just like a portrait painting used to be the only way anyone could ever be immortalized, I like to think I am giving these flowers a life longer than two weeks.”

All of the techniques she learned from representing the figure she applies to painting flowers. Painting petals, for example, is similar to painting human skin “because they are translucent, have similar light effects, and are alive,” she said.

Painting each one is a unique experience. “It’s important to notice those individual nuances,” she said, “the rhythms in the design.” Especially as an academic painter, she learned “to slow down, to pay attention to the little things in the world, and to see all those beautiful moments that happen,” she said.

Artists represent those moments. To the ancient Greeks and Romans, everything artists and artisans made was sacred and dedicated to the gods—whether it was a backdrop decoration for a Greek tragedy or a marble sculpture. As if continuing the thread of ancient Roman decorative wall paintings, which inspire her, Whipple’s paintings contribute to a collective creative legacy.

She hopes that every person will honor their own creativity in whatever way they can, from cooking amazing meals for their families to designing buildings that people will inhabit. “It is a very uniquely human thing, and beauty is a part of that from the very beginning,” she said.

Katie G. Whipple’s paintings are on view July 15–31, 2017, at the “Three Under Thirty” exhibition at Arcadia Contemporary, in Culver City, California.