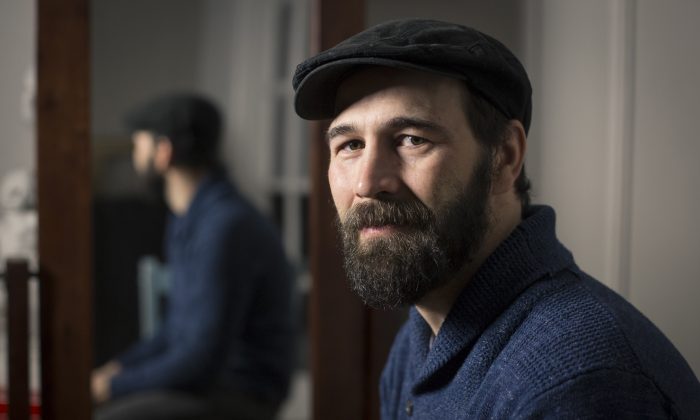 NEW YORK—A year has passed since Gregory Mortenson reached that quintessential artist’s milestone—a one-man show at a top gallery in New York City. For three years, he had worked on a series of paintings portraying the dignity, joy, and resilience of orphaned and displaced children who survived the earthquake in Haiti.

“I keep saying this, but those kids embody the triumph of the human spirit,” Mortenson said in his home studio in Harlem.

He first went to Haiti 10 months after the earthquake in 2010, without planning to create any paintings. He simply was given an opportunity to help build housing. Inevitably, he found himself sketching the children he met. In 2013, he returned to Haiti along with his wife and a group of friends to teach.

As he taught the children at an orphanage how to draw and paint, he made drawings and sketches of them, and the idea of creating a series of paintings started to germinate. He had been on the fence for a while before making that decision, sensitive to not wanting to create anything exploitative, until he realized that these children “needed to be celebrated and immortalized,” he said.

His Haiti series is reminiscent of paintings by William-Adolphe Bouguereau that dignify peasant girls. “Something can be deep about truth and beauty,” Mortenson said, commenting on how he was inspired by the 19th-century French artist, who is known for emphasizing sincerity in the artistic process to create beautiful paintings.

One of the most telling paintings of the series shows a 9-year-old girl named Venice sitting on a block of concrete. She concentrates on doing her homework, with her bare feet on earth and pebbles. This description sounds rather bleak, but the painting itself is uplifting, beautiful, and serene.

Although it is just paint on linen, the girl feels incredibly present—like a perpetual ambassador of hope. Mortenson decided to paint Venice doing homework because when she was asked, “If you could have anything in the world, what would it be?”, Venice, who was still living in a tent at the time, answered, “I would want to go to school.”

The painting, “Homework,” along with the rest of Mortenson’s Haiti series, affirms him as one of the most skilled and relevant artists of his generation.

“When I was painting, I wanted the viewer to feel the joy and happiness that I felt in Haiti with all these kids running around bringing happiness to others, which was in stark contrast to the death and destruction just outside of the borders of that orphanage. So I was trying to paint an experience rather than a painting,” he said.

Arcadia Contemporary gallery (now in Los Angeles County) exhibited the Haiti series, titled “Zion’s Children,” for just 10 days (Nov. 5–15, 2015). That is a short length of time compared to the three years it took for Mortenson to complete the series, but there’s consolation in knowing that the paintings themselves could remain relevant for hundreds, if not thousands, of years.

It was very satisfying for Mortenson to see all of them together. “I felt that it put me back in the orphanage, surrounded by all these children. I could hear their laughter and feel the hope of their bright futures,” he said.

A portion of the proceeds from the sales of the paintings benefited the Hope for Life Children’s Home in Port-au-Prince, Haiti. Mortenson said he wants to travel to Haiti again for a follow-up visit some day.

Since the exhibit, Mortenson seems to have bypassed the anti-climactic phase—the creative postpartum depression that usually ensues after reaching any milestone. But perhaps he has been going through that phase so gradually and gracefully that it is barely perceptible when one meets him in person.

As a stay-at-home dad and full-time painter, taking care of his young children during the day and painting in the evenings until around 3 a.m., he doesn’t have much time to wallow in fears of how to surpass his biggest artistic accomplishment so far. Perhaps these do come through in the ongoing series of work that he returns to between other projects and commissions—creating self portraits.

Looking in the Mirror

On a Sunday afternoon, Mortenson was working on a preliminary drawing, practicing and anticipating the composition and lighting problems he would face during the filming of an instructional video (at Streamline Art Video) that will be produced in January. His wife, Angela, played with their children in the living room.

There’s a mirror attached to the ceiling of his studio, but it’s not up there for him to look up at himself. He uses a standing mirror for creating his self-portraits.

“One problem in setting up for self-portraits is that if you go for a really extreme, Velázquez kind of light, you are lit up but your canvas isn’t,” he said. Hence the ceiling mirror comes into play. When he angles his large lamp up, the light reflected from the mirror becomes the light source for his face just as well as for his drawing pad or canvas on the easel.

Since most of his work is either in galleries or owned privately, his walls are decorated with his student work, a print of Jean-Léon Gérôme’s “Bashi-Bazouk,” and several palettes, including a couple he received with his National Portrait Society awards. Some toys stood around his computer.

For somebody who loves to paint the human figure and portraits as much as Mortenson does and who would readily draw or paint around the clock, having a reliable model was essential, especially during his 12 years of classical art training. In those years, he might have become a doctor, but when he was studying on a pre-med track at Southern Virginia University on a wrestling scholarship, his love for art eclipsed his interest in medicine.

He also studied in his home state of Utah with the classical realist artists, Patrick Devonas, from whom he learned how to create multi-figure paintings, and William Whitaker, who impressed him with his generosity in imparting knowledge. In 2006, he moved to New York to study with Jacob Collins, the founder of the Grand Central Atelier, from whom he feels the strongest influence in terms of instilling a robust work ethic and discipline in creating highly skilled art from life. Mortenson now teaches portrait drawing and painting classes on Saturdays at the atelier.

Mortenson spent a couple of interludes working as an illustrator for Hewlett-Packard and as an assistant to the post-modernist Jeff Koons, for a short stint of three months—an experience that inevitably reinforced his conviction to become a fine artist in the classical tradition.

During his studies, he would draw friends who agreed to sit for him, and the rest of the time he would draw his own face, which he finds infinitely challenging. Looking in the mirror, he said, “I have this really weird nose …., really heavy brow bones, and kind of a flat face.” He paused and gave a little sigh. “Looking at my features, it’s like a weird compilation of things. I wonder, how did it all come together? How am I not monstrous? [That’s] my observation,” he said, laughing.

“It became interesting because when you start lining them up, you start to see yourself age,” he said.

One can’t help but think of Rembrandt and the artist’s formation of his artistry through the process of creating self-portraits. In the way that Rembrandt in one self-portrait would wear clothes that emulated those of Albrecht Dürer or some garb seen in a Rubens painting, likewise Mortenson decided to wear a suit and tie for his first serious self-portrait at age 34, emulating Bouguereau.

He only had a two-year gap (at age 37 and 38) when he was immersed in creating his Haiti series. In his self-portraits at 39 and 40, he made himself look older than he really looked. “Everyone gets so mad about that,” he said slowly, softly, and then chuckled a bit.

There’s a striking contrast between the seriousness and almost despairing expression in his self-portraits compared with the jovial photos of him with his wife and children found on his Instagram account.

“I am looking at myself at hours on end, and so I’m intently looking at the form of my nose or my brow ridge and thinking about how the light falls across it,” he said. “So I’m not trying to come across as this angry person. It’s just how it works out. Typically, I try to stay very technical and focused on the structure, the hue, the chroma, and the value.” His approach to painting his face is akin to painting a still life.

While he works on his self-portraits, he puts on music that inevitably leads him to nostalgic introspection. “I found myself reliving moments of happiness and mourning and triumph, through that time machine that only music can take you through,” he said.

When he was in his 20s, he lost someone very close to him in a car accident. “It was devastating, life changing. In the midst of my mourning, I stumbled upon my reflection. I looked the same—exactly the same—but my heart was so broken. I was changed. ‘Am I still me?’ I wondered.”

Every time he works on a self-portrait, he may ask himself that question again, “Am I still me?”, and reflect on the next project.

While Mortenson’s disposition is warm and jovial, and he often feels he lives a charmed life doing what he loves, he cannot avoid feeling the weight of responsibility. “There’s a lot of one-hit wonders,” he said. “There’s this pressure to do it again. Every year it feels like that.”

Through the Eyes of a Child

Mortenson’s 1-year-old son, Jude, walked into the studio and presented a toy butterfly as a gift, then pointed at different things around the room. A few minutes later, his 3-year-old daughter, Lily, dashed in to declare to her brother that the studio is now off limits, defending her dad’s uninterrupted time.

Mortenson showed a large toy elephant he has been using as a prop for his next series, which focuses on New York City as seen through the eyes of his children. He also has a toy rhinoceros, a rat, and a raccoon, which he uses for his compositions.

“New York is both magical and terrifying for an adult, and so for a kid, imagine what it must be like through their filters,” he said. His daughter always points out the rats she sees running around the subway tracks, for instance.

Usually every artist who has children crosses the threshold of wanting to paint them. Mortenson is sensitive about not wanting to create sentimental paintings. “It’s easy to come across as the guy who proudly shows pictures of their kids in his wallet,” he said.

It’s also challenging, because children are so full of energy and move around a lot. Yet he has developed a way of working with children, particularly when he was creating his Haiti series.

“I love being with my kids all day, and I paint in the evenings, so this is all I think about,” he said.

On another easel next to his self-portrait drawing in progress, one could see the start of a drawing of his daughter, with butterflies turning into leaves next to her and preliminary traces of a cityscape in the background. “I haven’t fully developed these ideas yet,” he said.

He doesn’t think he is amazing for being able to balance being with children all day long and then painting eight hours every night, because painting for him is such a joy. He admitted a little sheepishly that he loves it, as much, perhaps a bit more, than he would taking a fabulous vacation. It shows in his beautiful paintings.