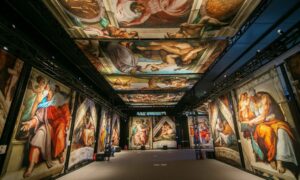 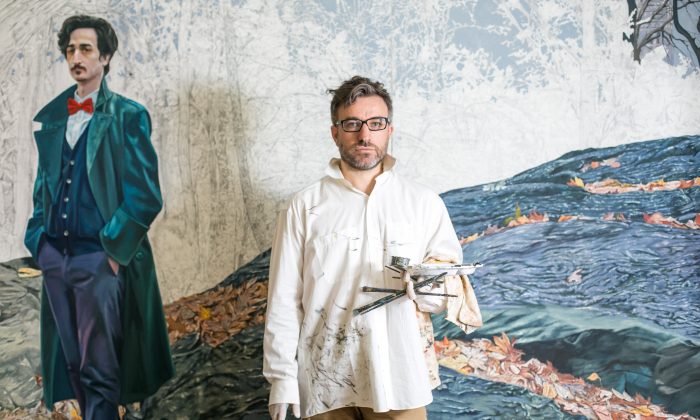 Fernando Martin Diez-Cabeza with his unfinished painting “The Gentleman With the Red Bow Tie," at his apartment in New York on Aug. 28, 2016. (Benjamin Chasteen/Epoch Times)
Arts & Culture

NEW YORK—A painting is not just something to be hung on a wall once finished. It is a creative feat to be celebrated for Fernando Martin Diez-Cabeza. The Spanish globetrotter turned New Yorker brings his life-size portraits into the world as mysterious, suspenseful, theatrical experiences. He unveils his paintings.

He pulled down the red velvet drapery of his latest piece, “The Gentleman With the Red Bow Tie,” to an eclectic party of 200—young and old, racy and dapper, and any variation in between. All clapped and cheered, transfixed and enthralled by the painting on the stage of the unexpected yet bizarrely fitting venue of a Russian Orthodox cathedral in the East Village.

Sabine Jourdan, a designer and former fashion model, stood back, watching people go up on stage to see the painting up close. She said, “It looks like they are part of the painting. It’s pretty magical in a way. It’s almost like [the painting] is opening a door to another dimension.”

It was the third Diez-Cabeza unveiling Jourdan had experienced. “I like all of them, but this one is especially interesting. I want to lie on the rocks,” she said, still gazing at “The Gentleman With the Red Bow Tie.”

Far from the solitary artist who dreads his own opening reception at a gallery, Diez-Cabeza, on the spectrum of artist stereotypes, is more like a Warhol-type in terms of inventing a whole new scene and eclectic following.

He has been unveiling one painting after another since 2004. Before one unveiling ends, he has already spotted the person he wants to paint next. It’s sort of a renaissance for Diez-Cabeza, who makes his living in the fashion industry and paints as much as he can during evenings and weekends.

When he saves up a good sum of money, he goes all out to organize his unveilings, like a Gypsy wedding, he said—providing free cocktails, hors d’oeuvres, and live music. For this latest one, he wore one swanky jacket before and another after the unveiling—as if to mark a rite of passage for the object he created.

“I think an artist has to have a social life too. I need closure, and I want to share it with everybody,” Diez-Cabeza said a few weeks before he would unveil “The Gentleman With the Red Bow Tie.” He added some purple paint to the rocks in the painting, which comprises two canvases. They filled the largest wall in his East Harlem apartment.

“This is crazy. It’s as big as my apartment,” he said, laughing. The height of the stretchers reached up to just an inch away from the ceiling. It harked back to René Magritte’s huge apple taking up the space of an entire room (“The Listening Room”), but Diez-Cabeza is neither a surrealist like Magritte nor a pop artist like Warhol.

He would call himself a figurative, romantic, Baroque-influenced painter, who’s also a fashion designer and an events planner.

He has designed for labels like Calvin Klein Jeans, Polo Ralph Lauren, and others. He made a brief cameo in the film “Advanced Style,” which captured the moment he unveiled his portrait of Tziporah Salamon in his apartment a couple of years ago.

While fashion plays a big part in his creative process, above all Diez-Cabeza finds inspiration in films, mostly by Roman Polanski and Alfred Hitchcock—the master of suspense. He always listens to movie soundtracks by composers like Ennio Morricone and Bernard Herrmann during his three-hour painting sessions. “‘Psycho’ makes me paint very fast,” he said.

The rocks are heavy by nature, but a red bow tie, which is a fragile thing, is to the eye more heavy than the rocks.
— Fernando Martin Diez-Cabeza

His inspiration for “The Gentleman With the Red Bow Tie” was Hitchcock’s psychological crime thriller “Rope.” He envisioned the man he painted, Johnny Maroney (who is a TV and film producer himself), as a character in the movie who leaves the party and goes for a solitary walk through Central Park.

“It’s a dark story, but Hitchcock gives it to you in Technicolor. Everybody looks beautiful and perfect. It’s New York City. I like the electrifying feeling of suspense,” Diez-Cabeza said.

He emulated Hitchcock’s movie in the sense that the painting is realistic but has been meticulously manipulated to create a sublime effect.

“The rocks look gray, but the paint is purple and green. I alter the colors of reality. This painting is in Technicolor,” he said. The head is life-size but, like in fashion illustration, he elongated the legs slightly to make Maroney look taller. He also changed the size of the rocks in proportion to the figure.

“I’m a freak about composition. This high point of the rock is at the same level as the right shoulder. The two towers in the background compensate for the feet,” he said, pointing out details in the painting.

He chooses the people he paints and styles them with their own clothes to elevate them to style icon status. “It’s kind of like time traveling, a frozen moment in a movie scene,” he said about the portrait of Maroney, explaining how he wanted to make him look timeless. He also loves the styling and the silhouettes in paintings by Diego Velázquez—the 17th-century painter who made black fashionable.

For “The Gentleman With the Red Bow Tie,” he just added the most poignant element to the subject’s outfit—the red bow tie.

Why a red bow tie?

An Artist of His Own Making

Diez-Cabeza was born in the Canary Islands, Spain, and spent summers in Cohorco, a medieval town in northern Spain in a region that looks similar to where “The Name of the Rose” was filmed. He started selling portraits of people at the young age of 14. He studied in Spain, Florence, and Rome, at the prestigious Accademia di Belle Arti. He’s lived in Germany, England, Nebraska, and China, and has traveled extensively.

Besides all of the portraits he sold as a teenager, he’s had few commissions and rarely has shown his work in galleries.

“I don’t want to be a drop of water in that ocean of the big art market. These unveilings are my little universe, but I feel I can own it,” he said. He has sold only one of his life-size portraits—that of Archdeacon Suvak, which hangs in the reception hall of the Orthodox Cathedral of the Holy Virgin Protection, where Diez-Cabeza has held his last three unveilings.

He doesn’t necessarily intend to sell the rest. “When I get older, you are going to see me living in a house upstate with all of my paintings, talking to them like a crazy person,” he joked. It sounds like a memorable scene from a movie.