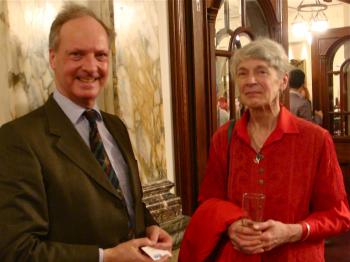 "I liked the use of complementary colours, using orange and turquoise, orange and green," said Hilli after the show.

"The colours are very exciting, but they have a real zing about them, and the movements tend to enhance the effect of the colours as well, because they’re swirling the colours around so that the colours are endlessly intermingling with each other, and giving this wonderful, almost rainbow effect."

As a painter, Hilli has a particular appreciation of colour: "Throughout the whole thing it was extraordinarily colourful, and it’s, for an English person that’s used to everything being grey, it’s a great relief, really!"

Businessman Peter had accompanied Hilli to see Shen Yun. He was impressed with the way the show presented Chinese history.

"Interesting that they show more recent Chinese history, like the terracotta warriors being found, and the girls in the school, they lose their teacher, so very interesting," said Peter, commenting on the dance Our Story, which tells the moving story portraying courage in the face of adversity, and leaves a message of hope and inspiration.

Reporting by He Bin and Kat Piper.