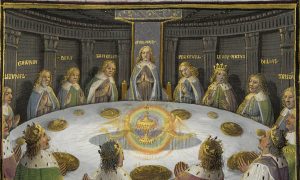 On the Path of Heroes
0
Share Now
TelegramFacebookTweetEmailTellMeWeReddit
Copy Link 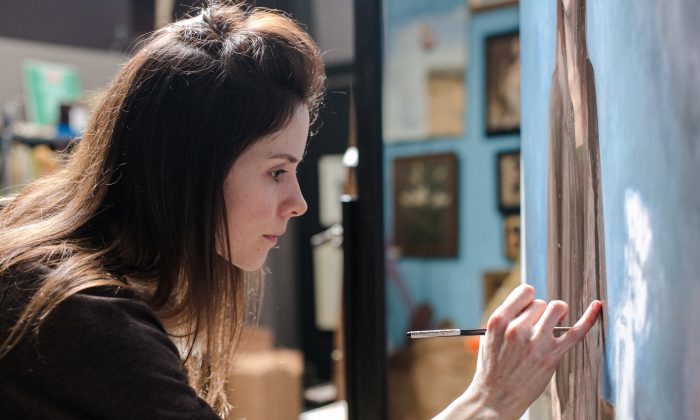 NEW YORK—She thinks of paintings in layers. Beyond the first thin layer of broad brushstrokes, the second more opaque layer of revealing forms, and the third layer of subtle embellishments, there are deeper layers beyond the visual. Elizabeth Beard believes the depth of meaning that comes through a painting, whether intentional or not, is a reflection of the artist.

“Painting has always been parallel to my human experience. … The more clarity I get in my life, the more clear my paintings become,” she said in her studio space at Grand Central Atelier, where she works as an artist in residence.

She has been looking in the mirror, intently contemplating and rediscovering herself, while working on the second layer of her self-portrait.

An iconic endeavor for many artists, usually at the onset of their careers, Beard said the definitive factor of painting a self-portrait is having a free model. She laughed at the simple, practicality of her point.

“I am essentially looking into a mirror, but when I look at the painting, I imagine that I’m observing the world thinking, ‘What’s going on?'” she said, laughing about her bewilderment.

Although she was speaking about a self-portrait, her demeanor relayed a sense of selflessness. Her generosity of spirit hinted that here is someone who’s been through a lot, who has been able to overcome it, and who can now be more genuine and really open.

With a Gentle and Confident Spirit

The gestures of her hands in her self-portrait especially stood out.

“That was something I was kind of shy about because I wanted it to be in a really subtle form, of showing worship,” she said. Beard has been developing her vision inspired by her Christian beliefs.

“I feel like I have to be so careful when I talk about my faith in the context of my paintings because it’s such a journey, even for me. It’s personal and I certainly don’t have all the answers, but it is central to who I am,” she said.

When she finished her studies at Grand Central Atelier two years ago she was commissioned to paint a multifigure narrative painting for the C.S. Lewis Institute in Ohio, where it’s currently displayed.

She painted the Parable of the Prodigal Son, the same scene from the story that Rembrandt depicted of the father receiving the broken and repentant son. Beard was inspired when she saw Rembrandt’s painting in The Hermitage Museum in Russia seven years ago. “I remember the way he had the father embracing the son was so natural and loving,” she said. “I think that story is really applicable to everybody’s life,” she said.

Beard grew up frequenting The Butler Institute of American Art in Youngstown, a small city in northeastern Ohio. Works on display there by painters of the Boston School tradition inspired her. As a child she enjoyed drawing and painting and wanted to do something that she could be really good at, but at the time she was not aware that any kind of classical training existed.

“I came from a very frantic background, where a million things where always going on at once,” Beard  said and revealed how she had struggled with her health and general well being.

After finishing her bachelor of fine arts (BFA) degree in studio art, she left Ohio on the spur of the moment and drove to New Hampshire to study with a Boston School artist, Paul Ingbretson. She did seek help to improve her health while she was there, but she also said, “I think it was more of a spiritual battle.”

Discovering painting with Ingbretson was not only inspiring for her, but also healing. “I would just listen to him talk about poetry, philosophy, sunsets, and beauty—but not in a cheesy way, in an honest way. I started to want to create things that are beautiful. I reconnected in trying to figure out how we are supposed to be as humans. From my perspective, if we were created, we must be created for some sort of purpose.

“Learning to draw and paint became a parallel to learning how to live healthy—just slowing down and breathing, being careful and honest,” she said.

From there she studied at the Academy of Realist Art in Boston for a short stint. Eventually she discovered Grand Central Atelier, where she felt she could hone her skills with more dedication. Moving to New York was scary and challenging for her, but ironically it became a place where she could also slow down. Feeling bombarded by a much wider variety of perspectives and opinions in New York compelled her to become more moderate with regard to her religion, but her faith became stronger.

Looking at her self-portrait, Beard said she was playing with the idea of her left hand either holding a paintbrush or a lily, maybe upside-down. The lily can symbolize femininity, birth, devotion, and purity.

“My hands are my favorite part of me, so I wanted the hands to play a really expressive, very dominant role,” she said confidently.

Her self-portrait will be part of a series of at least two narrative figurative paintings that she started working on during her six-week residency in Castel del Piano, a small town in Tuscany, Italy, last summer. That is where her self-portrait originated, with a drawing. “Going there was so good for the soul,” she said. She loved the air, the landscape, and the charm of the architecture that fit so harmoniously with nature.

The largest painting in the series also relates to the parable of the prodigal son, but the central figure is a nude woman sitting on a stool, looking at a green dress on the ground, in front of a bale of hay in a Tuscan landscape.

Beard explained that the hay bale is supposed to represent everything in the woman’s life. “I wanted it to show that it was all important. She’s in this time in her life when she’s also trying to figure things out. She’s hiding and vulnerable, and there’s this huge world of a landscape behind her,” Beard said.

To recreate parts of the Tuscan scene in her studio space, Beard attached hay to cardboard, placed some tulips in a vase and a green dress on the floor. Like all of the artists and students at Grand Central Atelier, who use the traditional techniques of the old masters, Beard paints from life and from sketches. The model also flew to Italy and to New York from Atlanta for Beard to paint her.

Beard finds some people’s responses to her work baffling. “This is kind of funny but sometimes I get a response like, ‘As somebody who is a Christian, why would you paint nudes?’ which to me sounds kind of silly,” she said. For artists continuing to create work in the lineage of the old masters, the nude figure is very important.

Having reached a healthy balance in her life, feeling good about being good to herself, Beard also recalibrated her understanding of beauty and the importance of exalting the human figure from youth to old age.

“We are all human, we are all going to die one day, and I want to paint humans that are having a real human experience. … Making an incredibly beautiful painting because there is beauty in the world is a good enough reason to do it, and there’s so much to be said about why our culture needs that,” Beard said.

Beard will show her paintings at a group show at Eleventh Street Arts in Long Island City, opening on April 15.